The Elsterperlenweg® trail is divided into six sections that can be completed either on their own, or one after the other as a circular walk. One unusual aspect of this trail is the fact that there are cross links that make it possible to combine the sections according to the way it suits you best.

If you decide to complete the circular walk, it starts and ends at the summer palace and park in Greiz – favourite spot #1. It is the last extensive landscaped park created by the House of Reuss in Thuringia. The park not only impresses with long sight lines but also with varied planted areas and magnificent giant trees. It also surrounds the summer palace. This former summer residence of the older line of the House of Reuss now serves as a museum where the dynasty's book and copper engraving collections are on display. It is also home to the "Satiricum", an exhibition dedicated to caricatures. 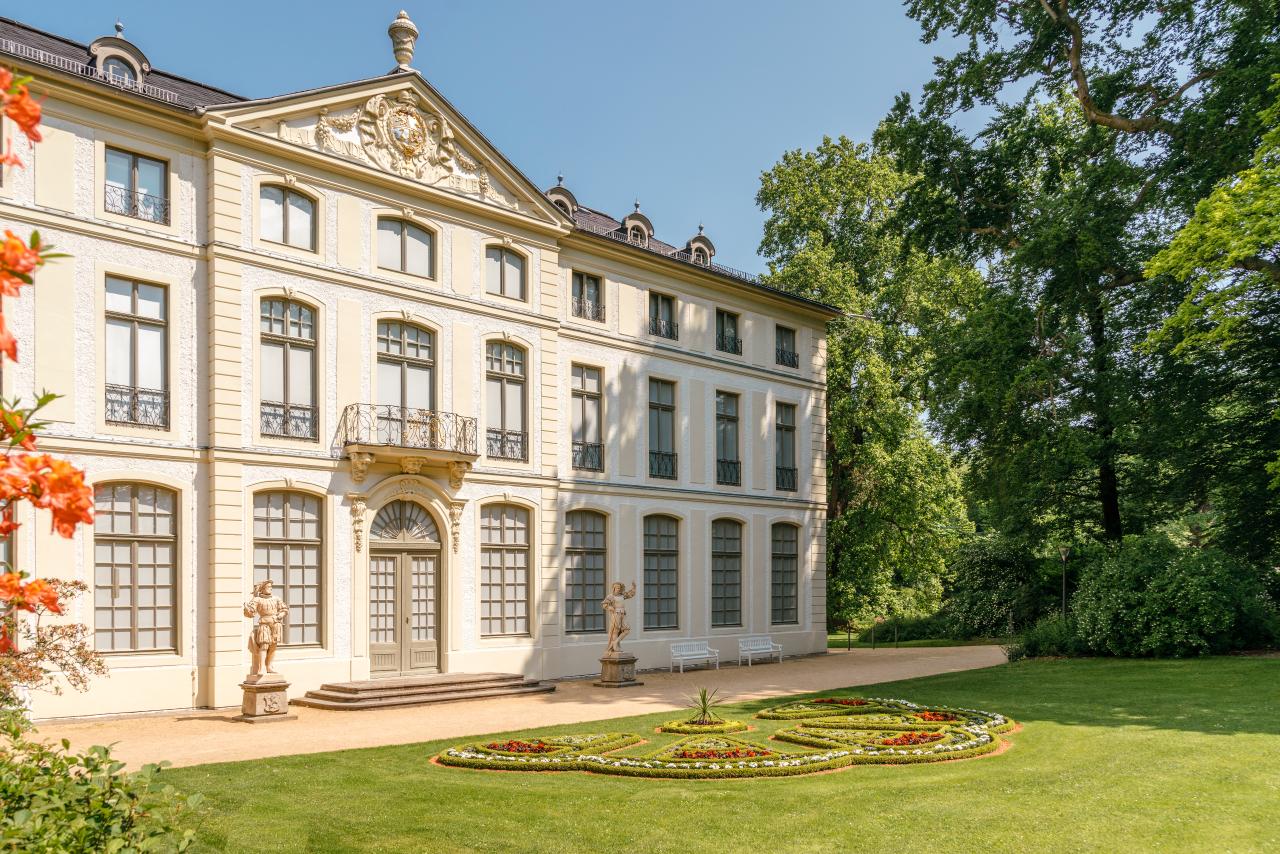 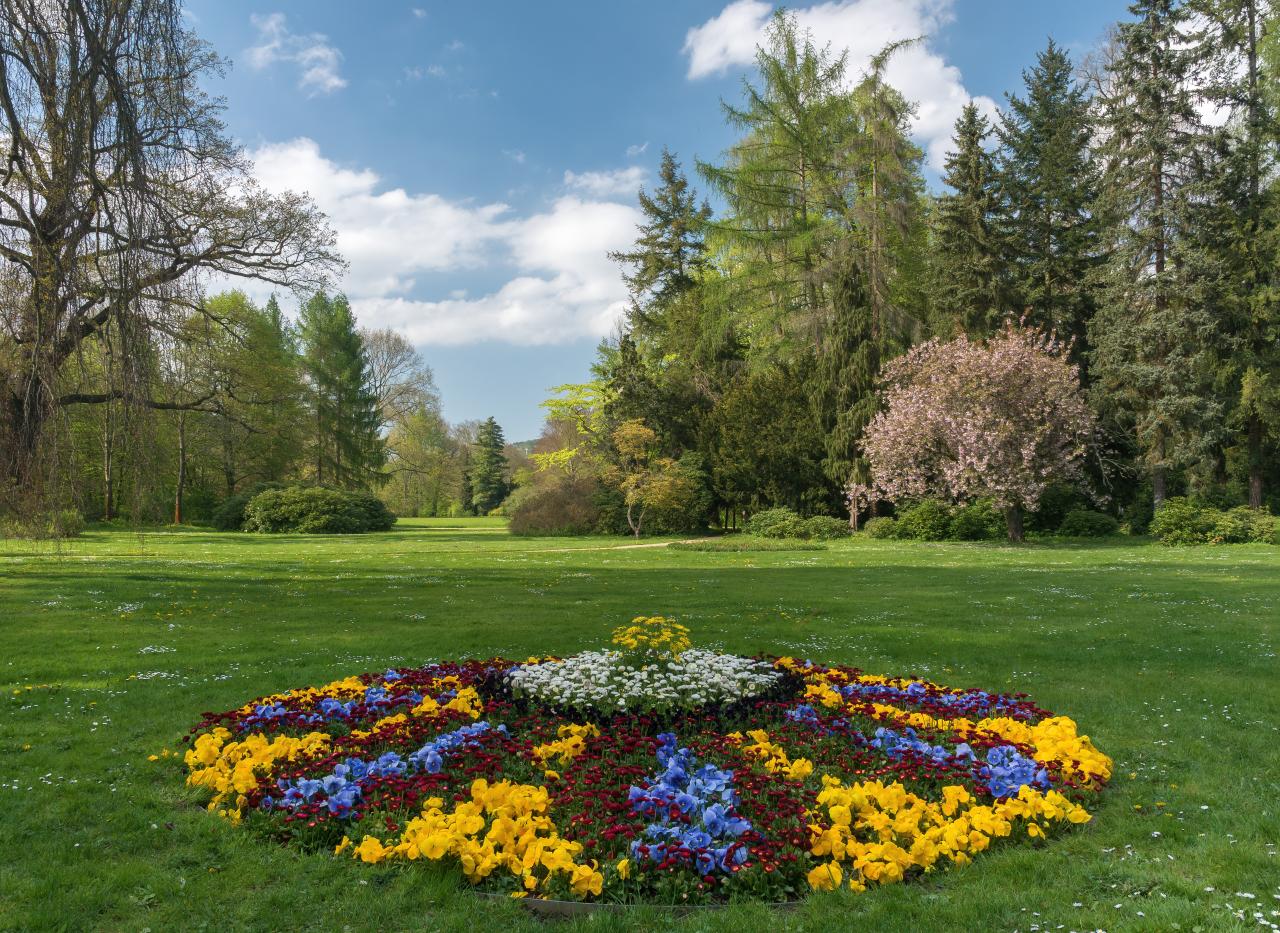 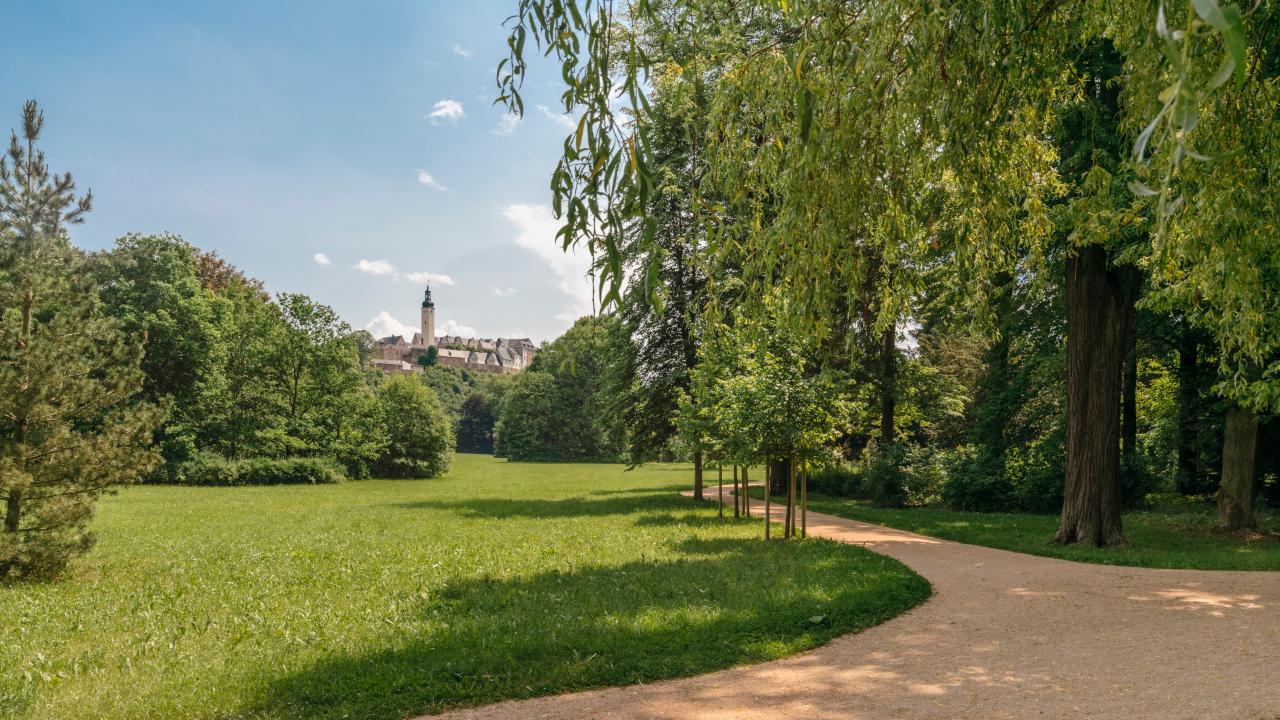 It is difficult to tear yourself away from the glorious garden and the palace, but the favourite spot #2 is not too far away: Nitschareuth, a quaint village with only 200 inhabitants all hikers who are completing the first section of the Elsterperlenweg® pass.

A touch of Hollywood

The small village is a paradise for hobby and nature photographers: Old half-timbered buildings, impressive farmyards as well as the idyllic scenery are all just crying out to be captured forever. Film makers have also discovered the charms of this village; in consequence, it has served as the backdrop for quite a few productions. The farming museum is also worth a visit. On display are old tools, furniture and documents that show what life was like for farmers in the 18th and 19th centuries. 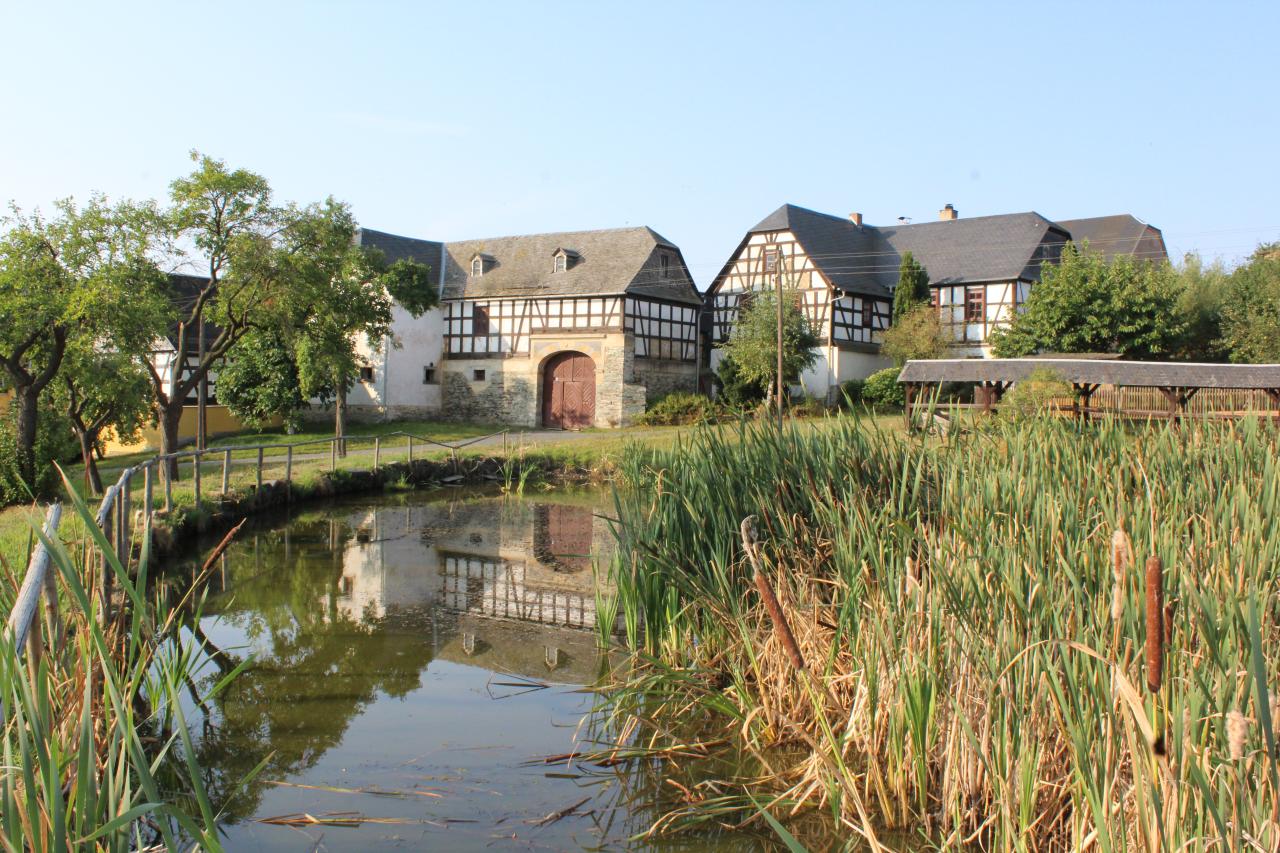 Looking for an insider tip?

History is followed by culture – the "Kulturhof Zickra" is located along the second section of the Elsterperlenweg® and is our favourite spot #3. An old half-timbered farm has been converted into a woodturning and cabinetmaking workshop whose artisanry you can admire, a venue for a variety of non-mainstream concerts, theatre performances and shows, and a small gallery. The "Kulturhof" is considered a leisure activity insider tip. The cosy farmyard café is also a great place to regain your strength for the trail's next sections.

On the fourth section of the Elsterperlenweg®, hikers can look forward to a real rarity that is also our favourite spot #4 – the wooden bridge in Wünschendorf. The unusual aspect: The bridge, which is 71 metres long, is covered. 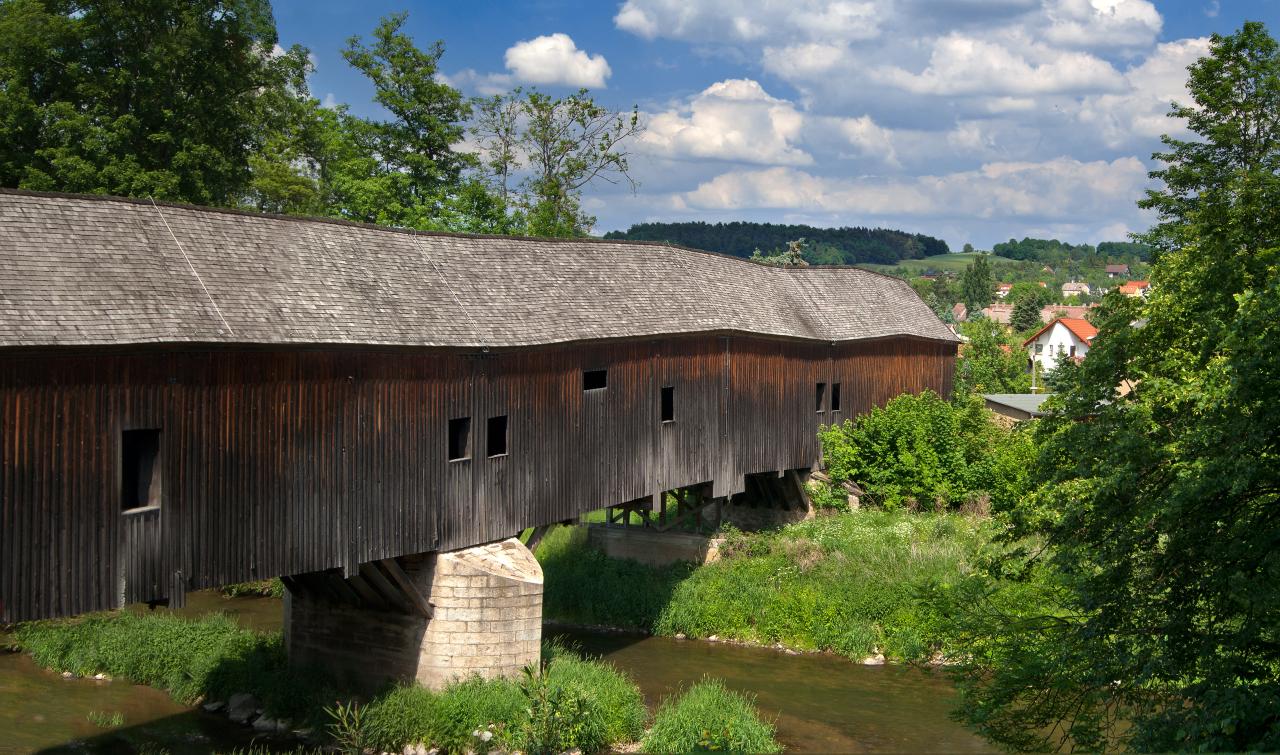 It was built in the mid-13th century, and offered travellers and merchants a safe way to cross the Weiße Elster river. Over the years, the winter ice and the passing of time did some damage, but it was rebuilt several times. The current structure dates back to the 18th century and even bravely withstands the motorised vehicle traffic that now crosses it.

Of Henry and Sophie

Hikers also need to be a little brave if they want to master the fifth section of the Elsterperlenweg®. It runs steeply uphill in some parts, and calls for stamina. However, you'll be rewarded for the climb to the top of the Hirschstein, which is 375 metres high, with our favourite spot #5: The "Sophienkreuz", also called the "White Cross" by the locals, a 12-metre-high cross. A "noble" sight, indeed: Heinrich XX, Prince Reuss of Greiz (of the older line of the House of Reuss) had it erected in 1838 in memory of his wife Sophie, who died at a very young age. The cross has been a scheduled monument since 1952. 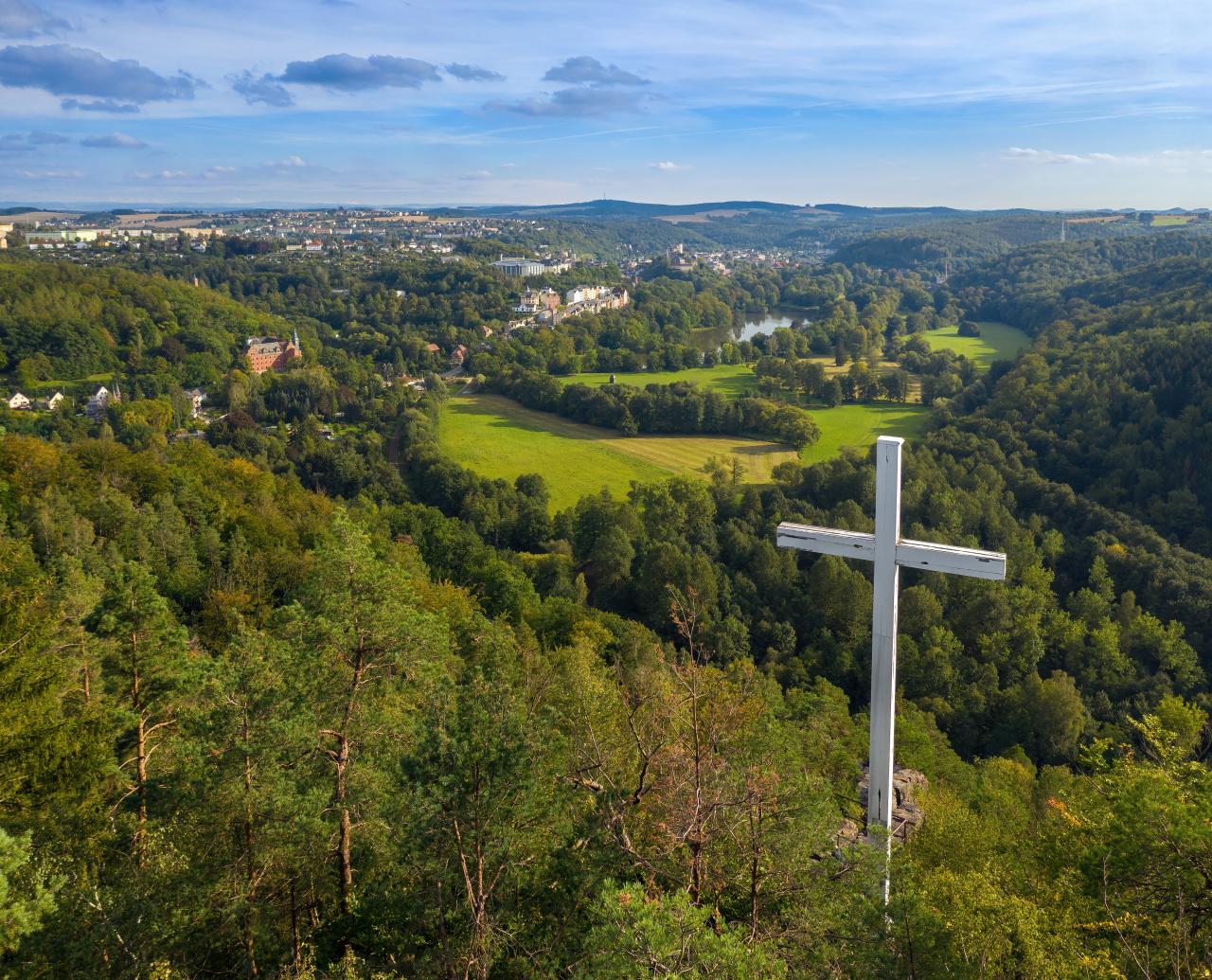 View from the White Cross to the city of Greiz ©Sebastian Theilig, Tourismusverband Vogtland e.V.

Always worth a trip

From up here, the views of the town of Greiz are glorious. You can also see the palace park from where you set off on your hike, and where it will now end. Besides the favourite spots mentioned above, there is a lot more to see on the individual sections of the Elsterperlenweg®. The landmarks along the course of the Weiße Elster river follow each other as closely as the pearls on a pearl necklace. One thing the hikers can enjoy throughout, as well as at all stations, is inner peace and unspoilt nature. Who knows, you might even be back here sooner than you think... 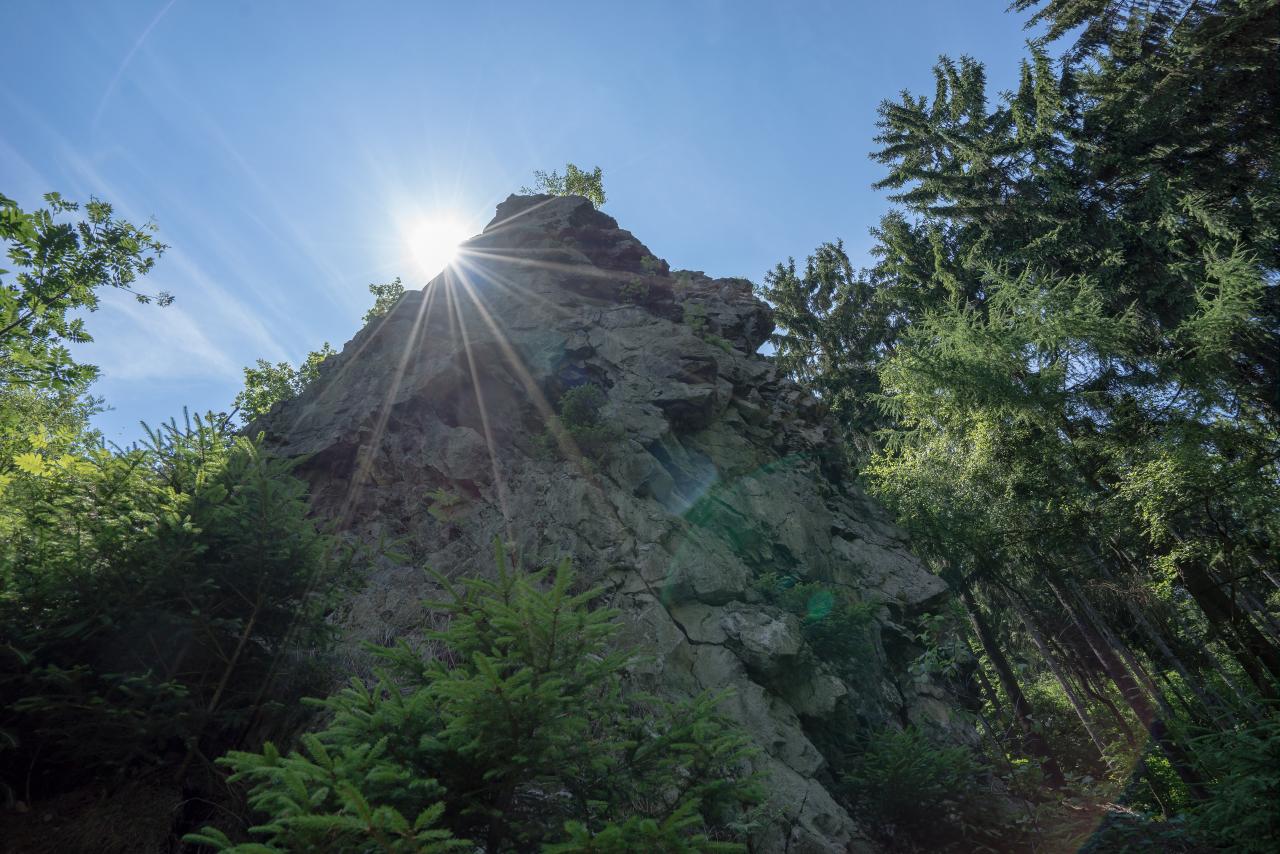 The Elsterperlenweg® challenges you with some ascents and descents. But it also rewards you with charming views. Enjoy the view from the legendary Weiberstein into the Elster valley, look around on the Silberberg or climb up the rock formation Teufelskanzel and let your eyes wander over Greiz. (Picture: Teufelskanzel ©Tino Peisker, Tourismusverband Vogtland e. V.)

Find out about the stages of the Elsterperlenweg® and discover which hosts will welcome you on your hike.
Discover now