Among chirping birds and rustling treetops

The small station in Obstfelderschmiede is set in idyllic surroundings, right in the heart of nature. Life is peaceful here, and it moves at a leisurely pace. We can hear birds chirping and the treetops rustling gently in the wind. Suddenly, a bell announces the approach of the Oberweissbach funicular railway, and before long cheerful people are emerging from the valley station, happily chatting away. 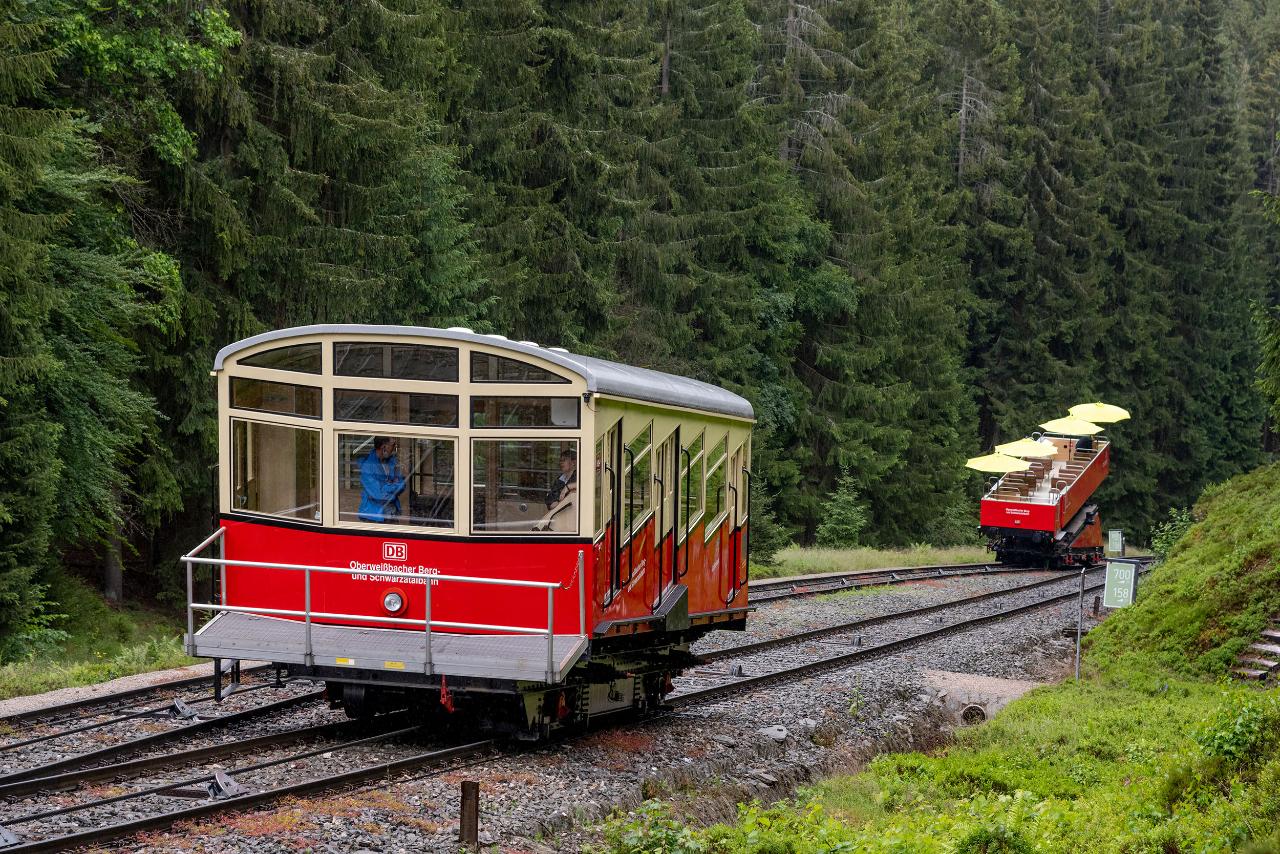 We board the train and admire the historical carriage with its rows of tiered seats and large windows. Everything here is authentic and dates from the 1920s. Then we’re off. The train glides slowly out of the station virtually without a sound, before beginning its steep ascent. We leave the valley behind us, and with it everyday life. Soon we start to notice wooden sculptures along the track either side of us. The conductor explains that these figures are linked to the history of the region. They include a herbalist and an itinerant apothecary, the unofficial ambassadors for the oils and other remedies this region was once famous for. There’s also ‘Porzellina’, representing a centuries-old tradition of porcelain production, and a special bench dedicated to Friedrich Fröbel, who invented the concept of the kindergarten. 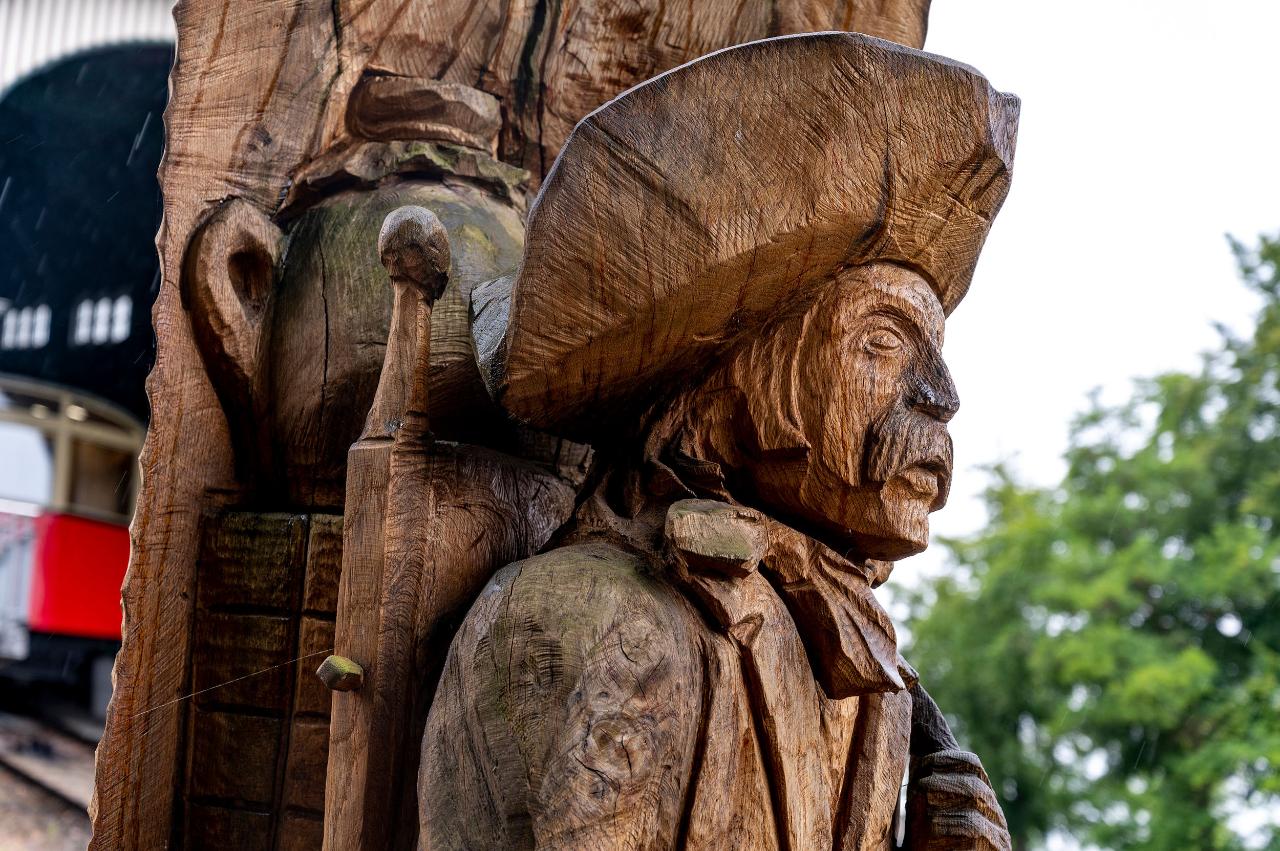 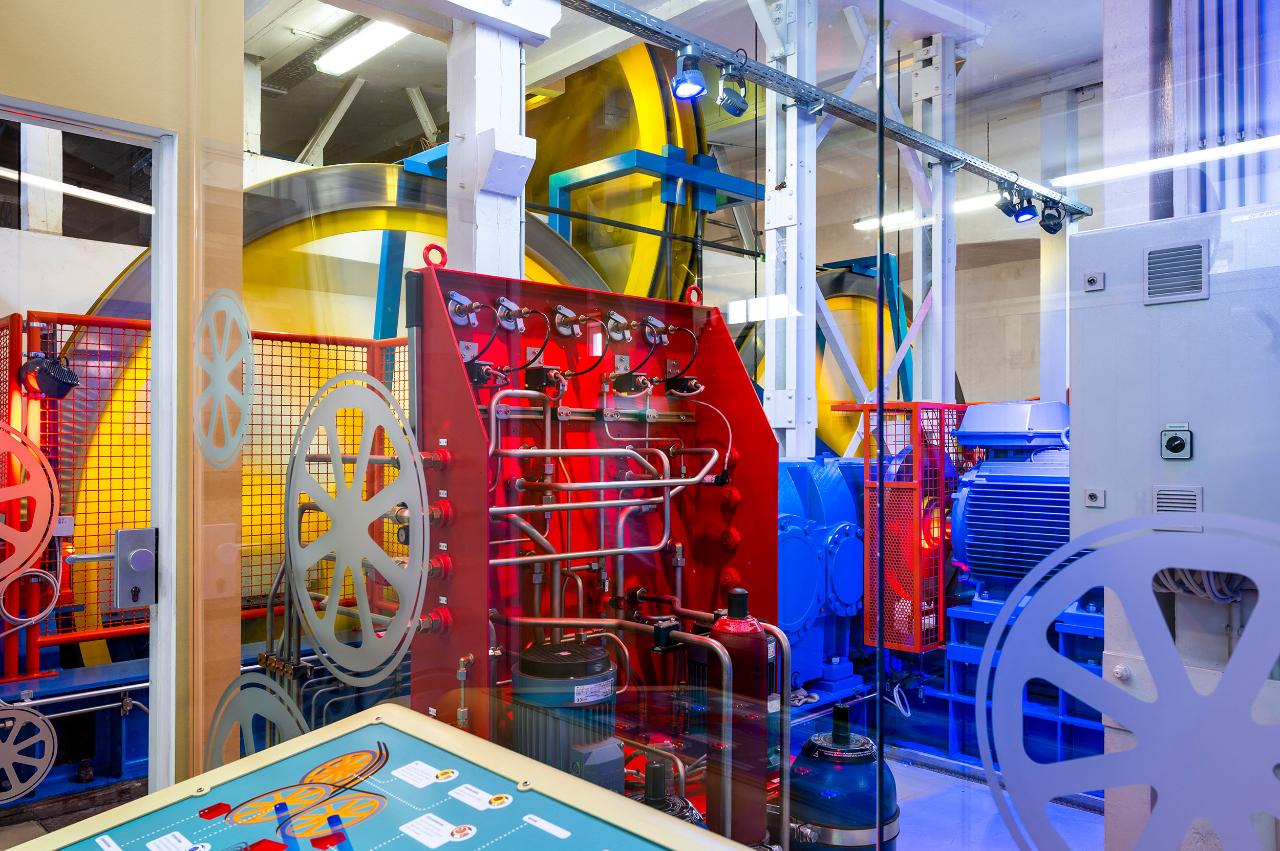 A trip on the funicular is the very definition of slow travel: the uphill climb takes 18 minutes. But it’s worth it for the spectacular views that await you at the top. Up here, you’ll also find the Maschinarium, the machine room that doubles as a showcase for the fascinating funicular technology. It is a masterpiece of engineering that saves and even generates energy by exploiting the force of gravity involved in the downward trip, which is then used on the upward journey. How’s that for inspired design?

To Oberweißbach on the natural remedy train

At the funicular’s upper station we board the natural remedy train – the Olitätenwagen – which runs from here via Oberweissbach to Cursdorf. Once again, our train glides silently out of the historical station. “It’s almost like being in the Allgäu,” sighs one of our fellow passengers appreciatively as she catches sight of brown mountain cattle grazing on the meadows of the upland plateau. 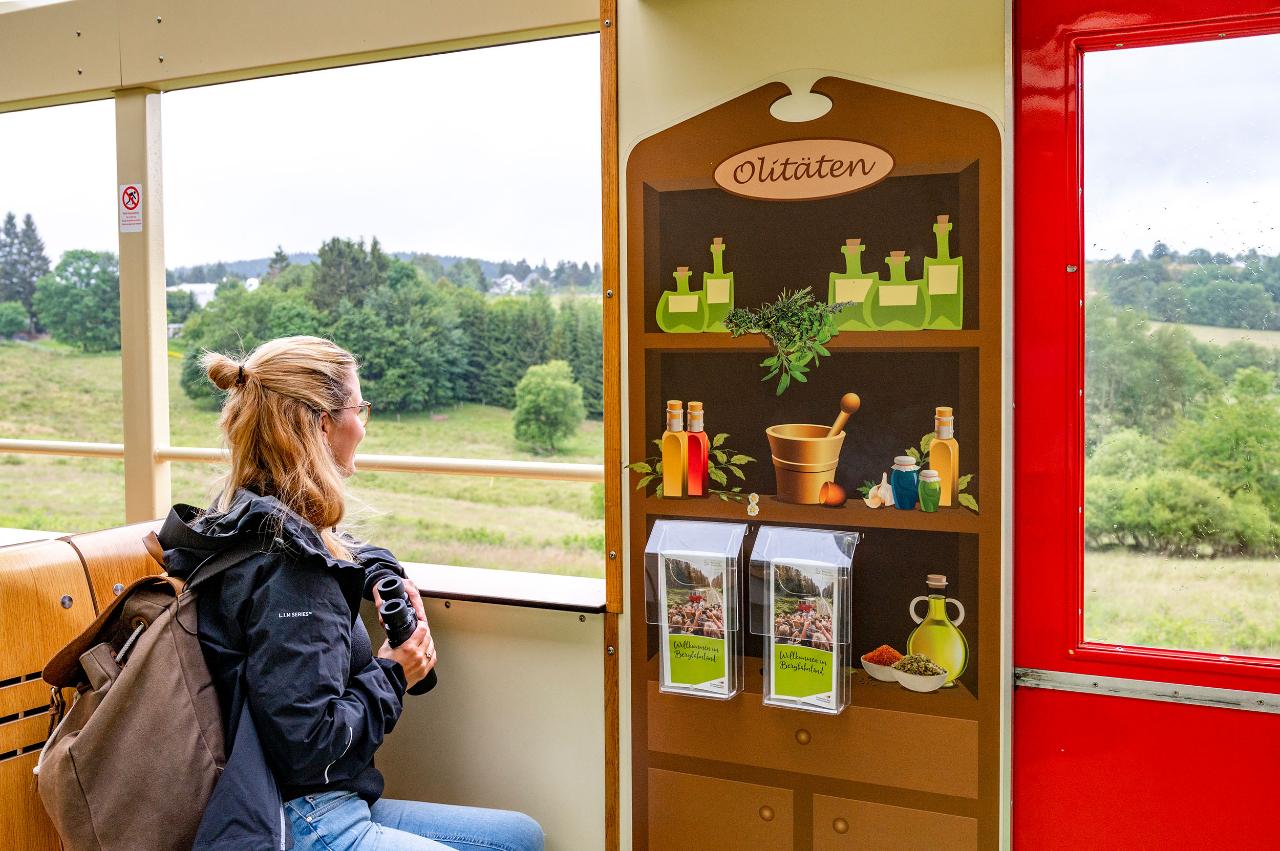 Admittedly, these are not the kind of views you’d expect to see in Thuringia. We turn our attention to the contents of the carriage, which include a game of herbal ‘pairs’, a scent box, an insect box and a bird call box. A great introduction to Thuringia’s ‘herb garden’. We also find out more about the natural remedies which gave the train its name. The Schwarza valley has long been famous for its herbs and medicinal plants, which formed the basis for ointments, tinctures, extracts and teas. In previous centuries, they were some of the region’s leading exports. First, local women – the herbalists – would gather the plants and process them in small forest laboratories. Then the itinerant apothecaries would deliver them to markets across Europe, transporting them in a sort of wooden backpack. They always travelled on foot, even to distant countries such as the Netherlands, Denmark, Poland, France or Hungary. So which herbs were these exactly? 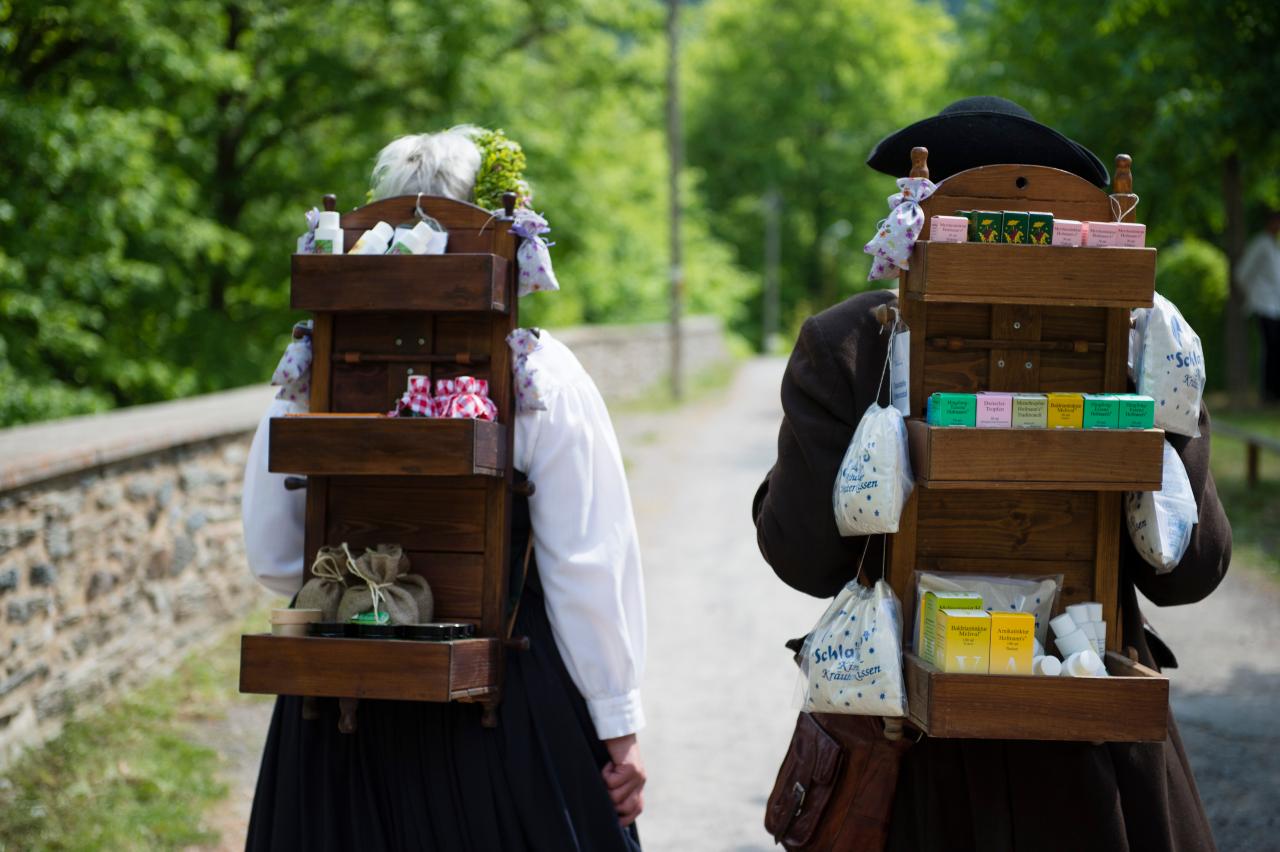 We decide to have a look at the herb discovery trail later to find out more. Around 90 different types of medicinal herbs are said to grow along the route. They weren’t planted there, but simply appeared where nature had put them. The trail also has QR codes that can be scanned with your smartphone to access information on the herbs. We’re looking forward to learning all about them!

The Thuringian Mountain Railway consists of three lines: the funicular railway, a flat section along the upland plateau and the Schwarza valley railway. Its centrepiece is the funicular, constructed between 1919 and 1923, which is said to be the steepest standard-gauge funicular. Over the entire length of its 1.4 kilometre track it climbs a total of 323 metres, reaching a maximum gradient of 25 per cent. The journey takes 18 minutes. At the top, it connects to a flat section that runs across the upland plateau for 2.5 kilometres. From May to October, if the weather is suitable, a special ‘natural remedy train’ with a panoramic roof and glass-free viewing windows runs on this section. The valley station at the lower end of the funicular provides a connection to the Schwarza valley line.
Learn more