The small towns along the Rennsteig Trail – Lauscha, Steinheid and Neuhaus – have always been closely associated with the art of glassblowing. Almost everyone who lived there used to have some connection with the glassblowing trade. Helmut Bartholmes’ family, which has been producing glass Christmas tree ornaments for five generations, is no exception. His story illustrates the importance and the value of this heritage, and shows how it is being preserved and passed on in the 21st century.

The gas burner spreads a warm light across the room, as a glass rod is heated above its open flame. With great dexterity, the glassblower skilfully balances the rod as he turns it, blowing air evenly into it at the same time. Within a few seconds, the glass expands into a sphere of the desired size. What seems to come so effortlessly to the seasoned glassblower is actually a highly skilled craft that is usually handed down through the generations. 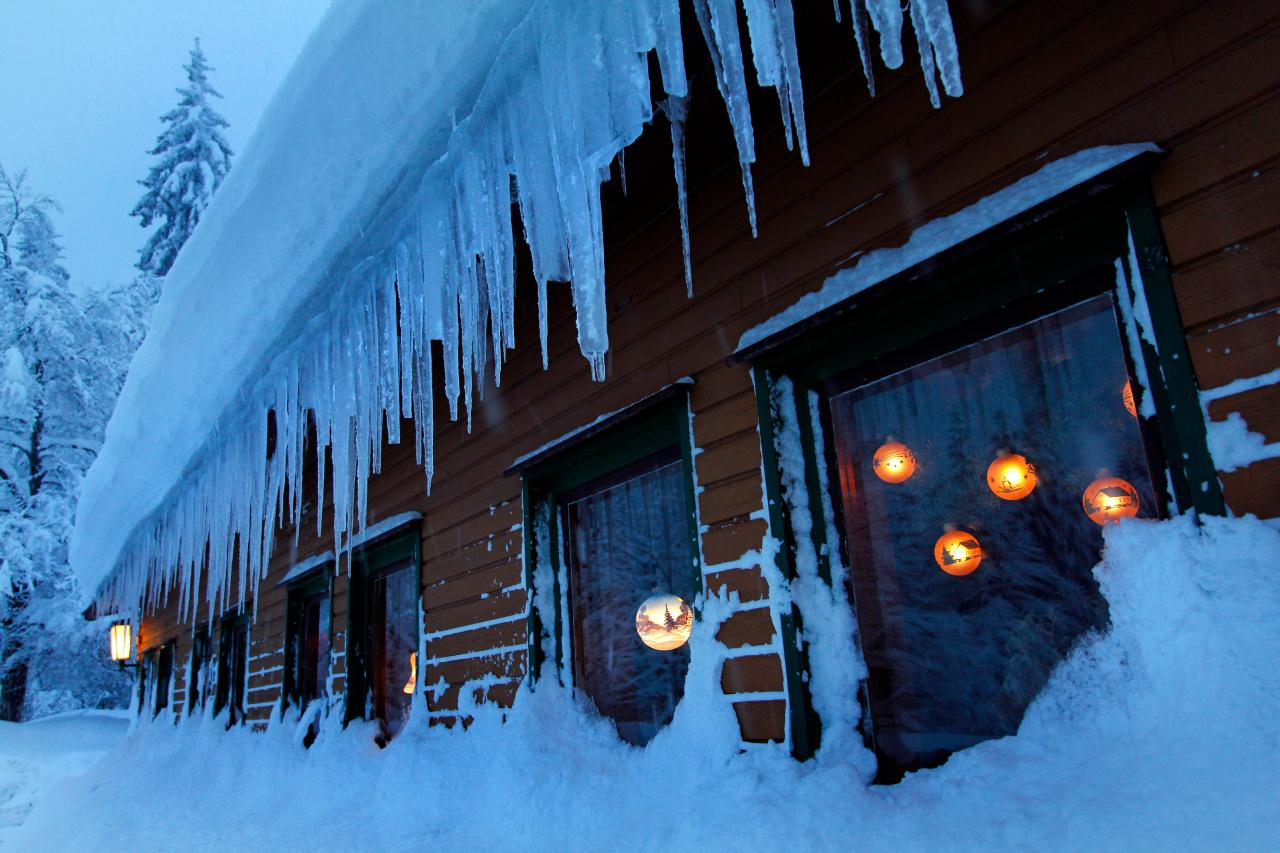 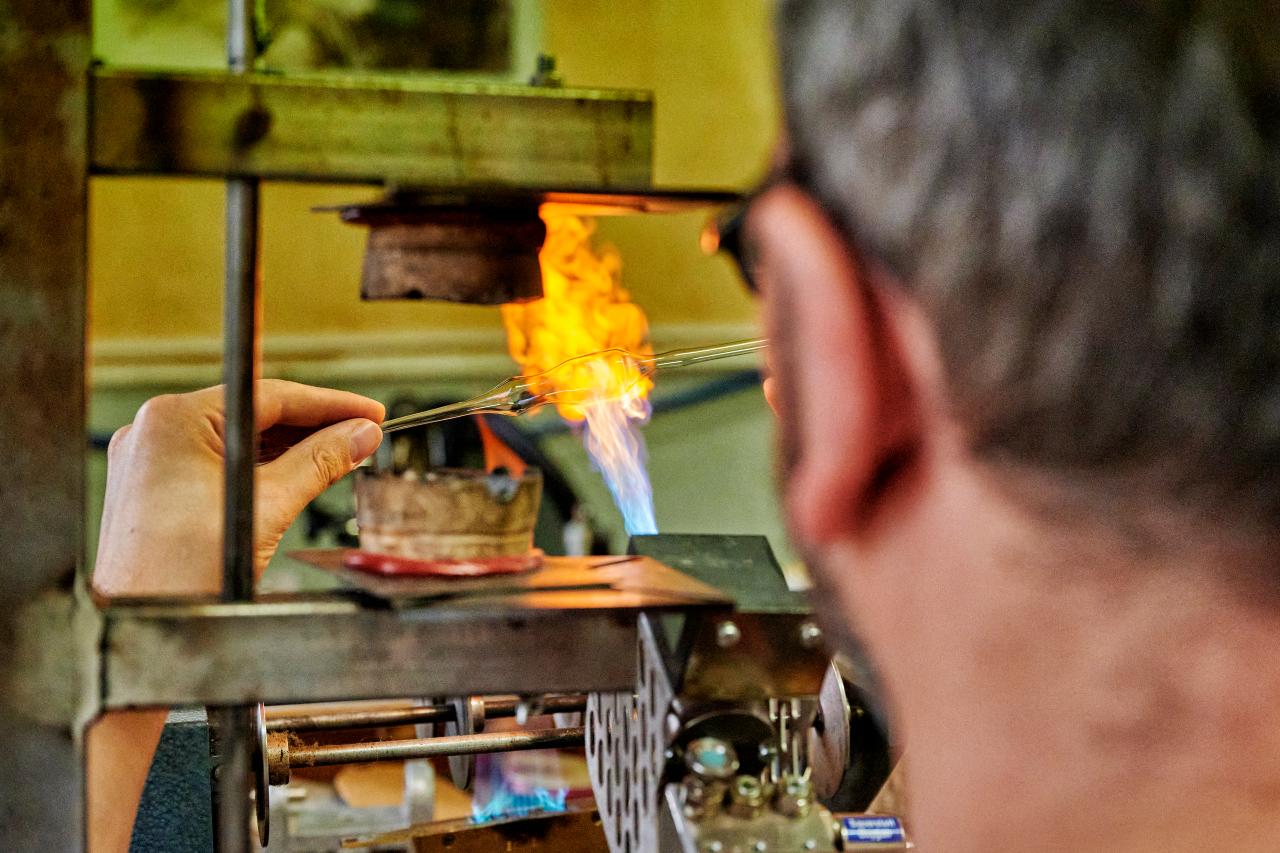 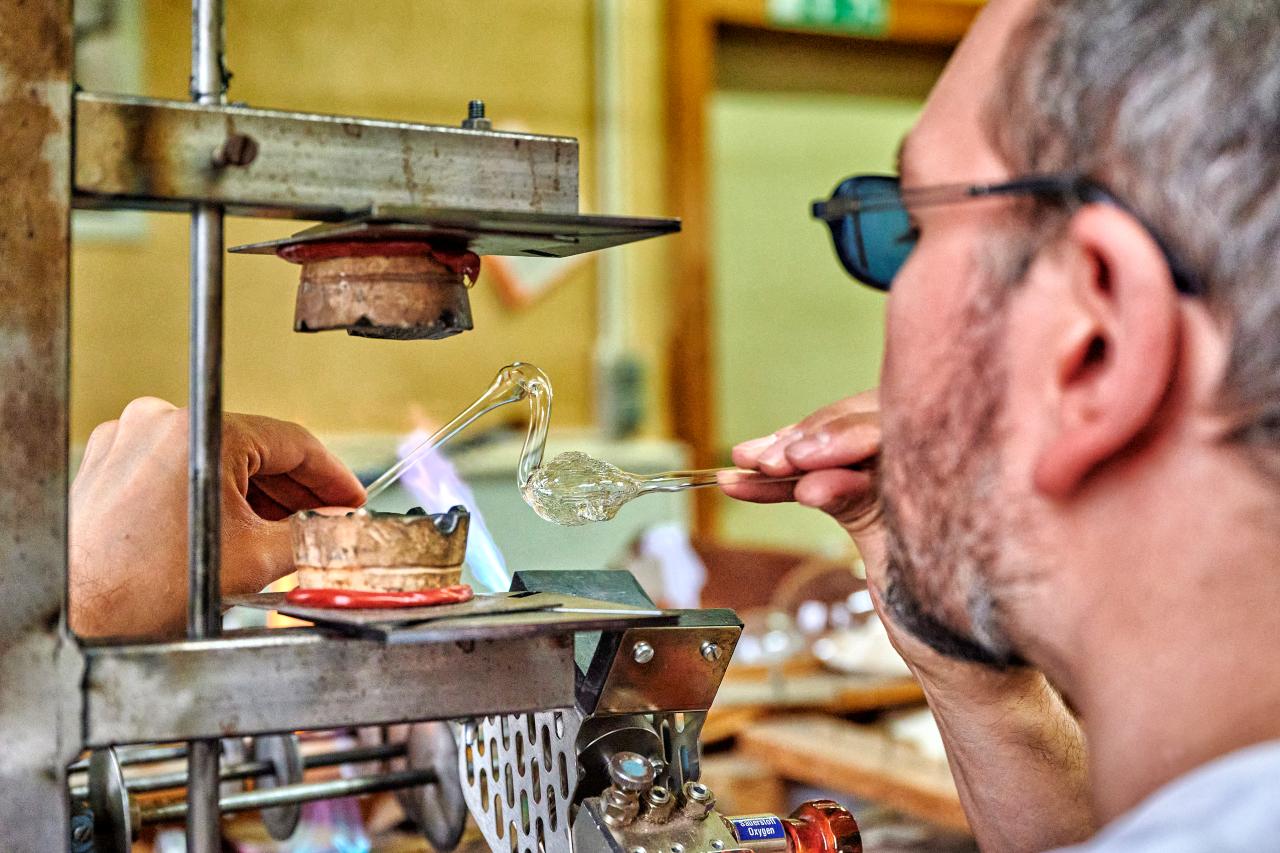 Glassblower creating a bird. The moulds are highly treasured and often handed down through the generations. ©Florian Trykowski, Thüringer Tourismus GmbH

This is certainly true of the Thüringer Weihnacht glassblowing workshop. Helmut Bartholmes produces glass Christmas tree ornaments just like his grandfather and his great-grandfather before him. The business was founded in 1885 – Helmut Bartholmes is the fourth generation, his son the fifth. Their most treasured possessions are sample books and glass designs that mostly date back to his grandfather’s time. Bartholmes has around 800 moulds that have helped generations of glassblowers to create countless figures and objects, from Santas and birds to nuts and fruit, all made of glass, and all destined to end up adorning Christmas trees. The Thüringer Weihnacht glassblowing workshop is one of the Thuringian Forest glassworks where Christmas tree ornaments are still produced in the traditional way. Everything is done by hand: from the start of the process, when glass rods are heated over an open flame until they have the desired shape, all the way to the end, when the ornaments are painted or sprinkled with gold glitter. 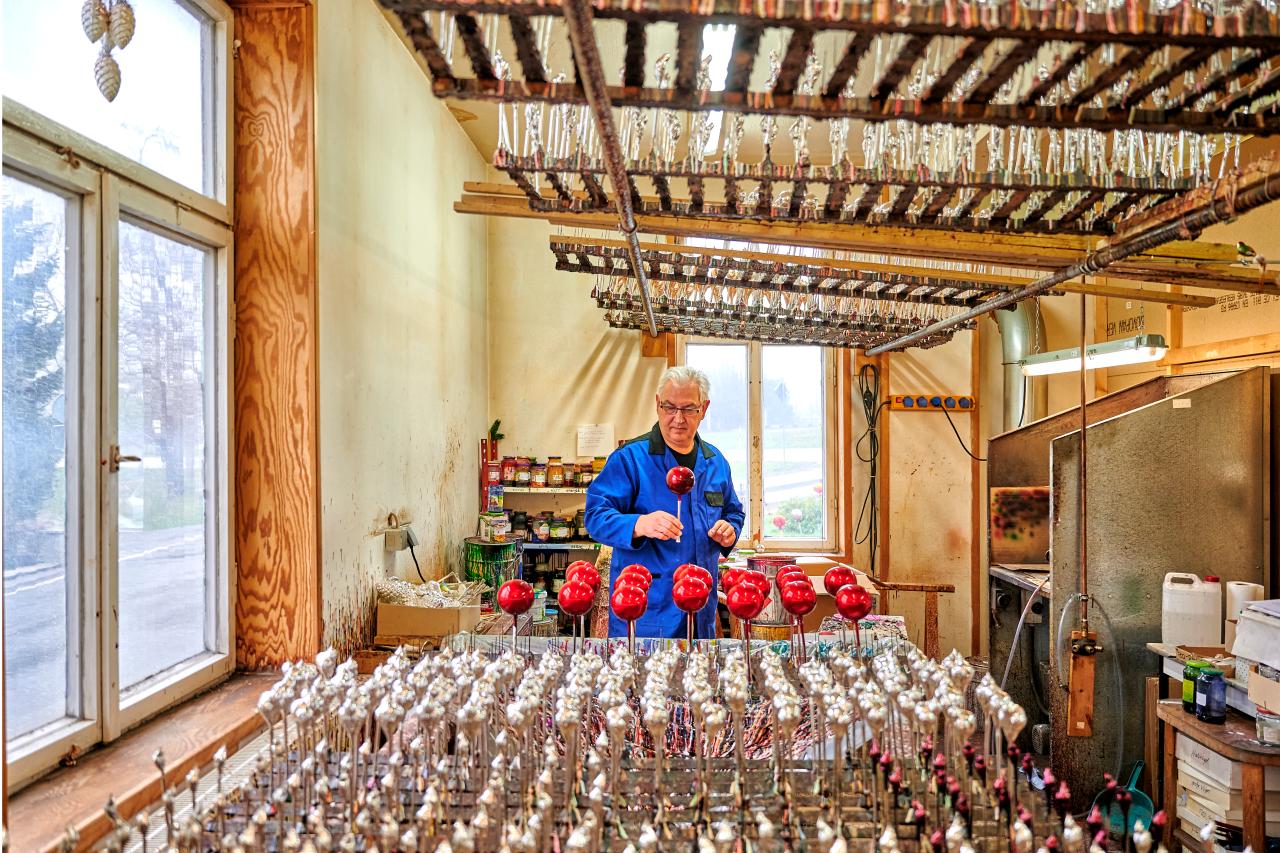 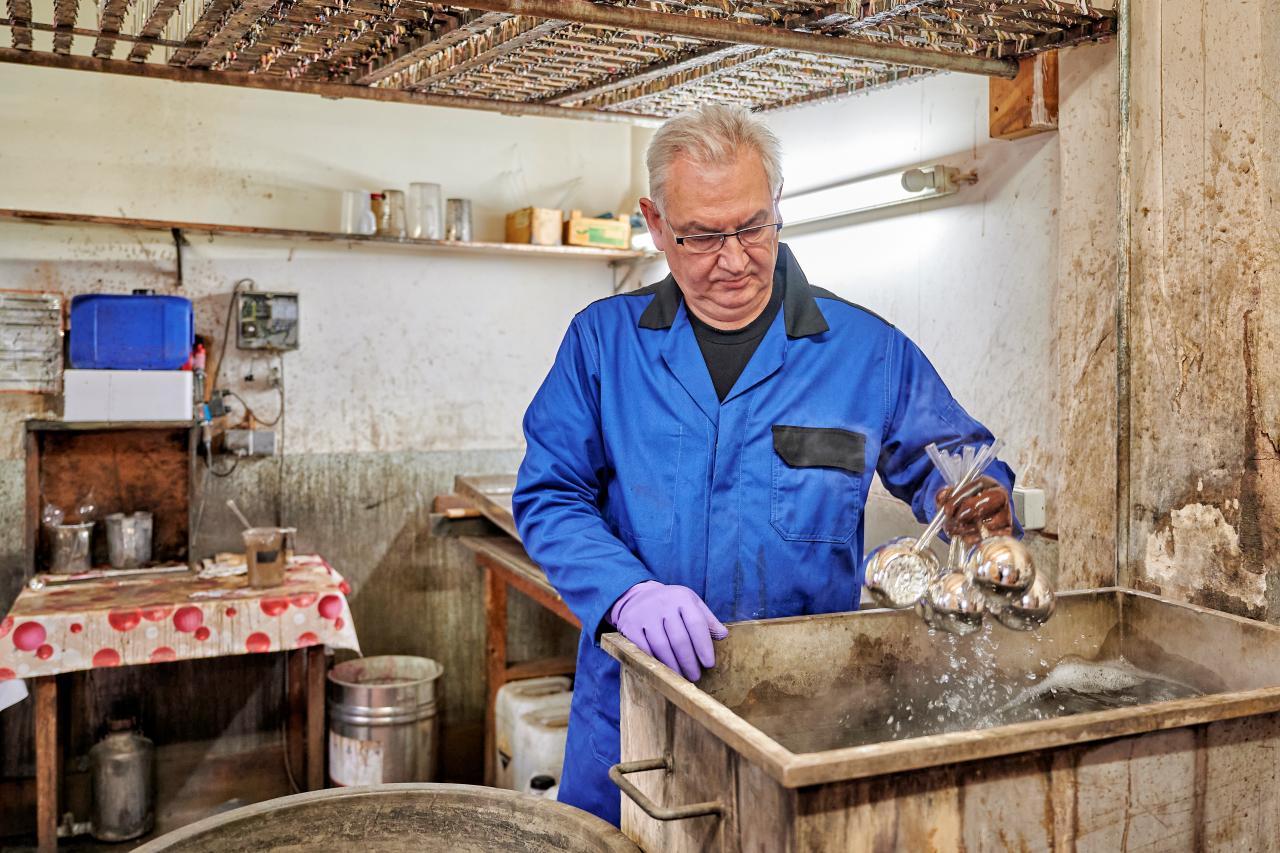 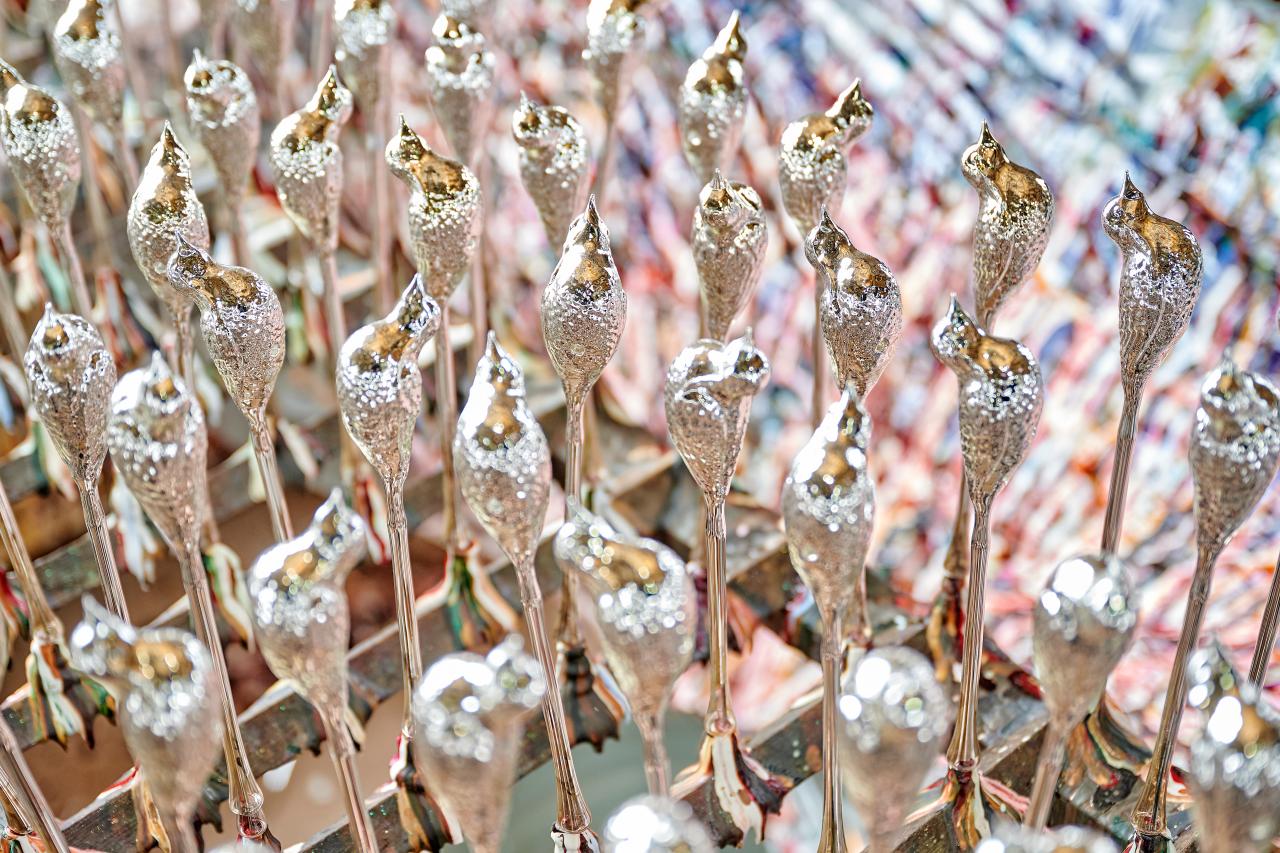 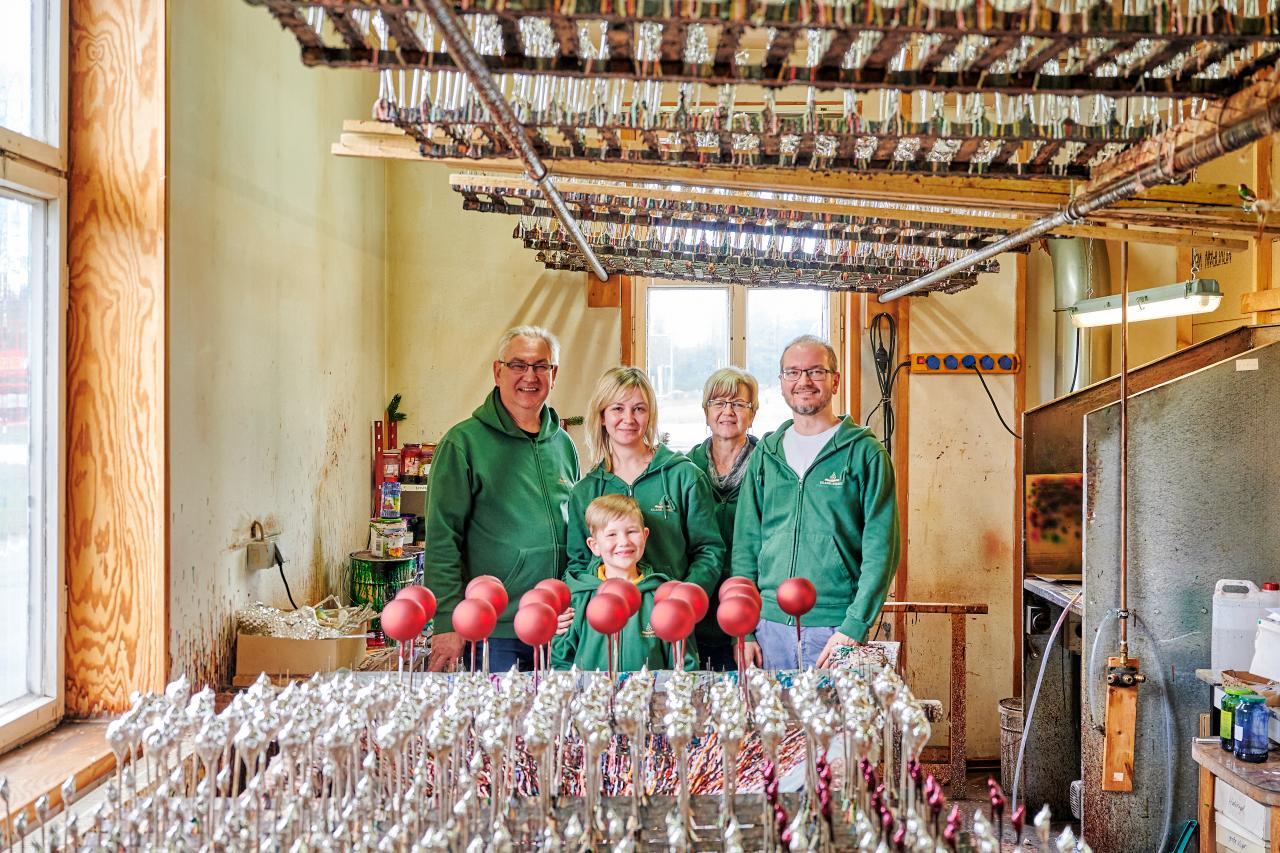 Lauscha is the birthplace of glass Christmas tree ornaments, which were first produced commercially in 1848. Before that time, trees were traditionally decorated with apples and walnuts. Legend has it that the idea of making colourful baubles to use as Christmas tree ornaments came from a poor Lauscha glassblower who was unable to afford the expensive walnuts and apples in 1847. The first picture of a glass bauble on a spruce branch was actually discovered at Steinheid church and dates from around 1830. The new tree ornaments soon found their way into dealers’ catalogues and were exhibited at trade fairs – but they were initially regarded as glass toys. The big breakthrough came in 1871, when Kaiser Wilhelm had his Christmas tree in Versailles decorated with delicate baubles from Lauscha. Soon after that, Lauscha’s Christmas tree ornaments took the whole world by storm, not least America. 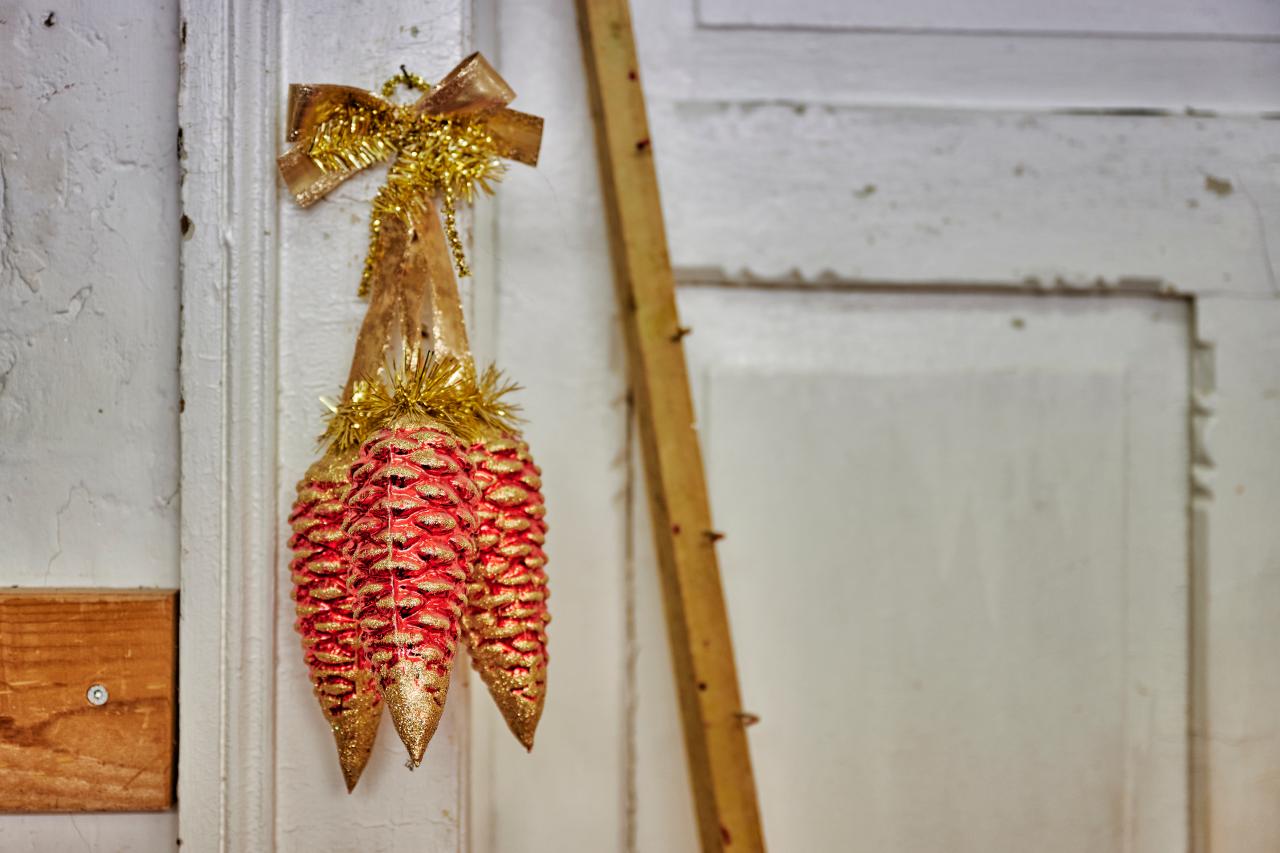 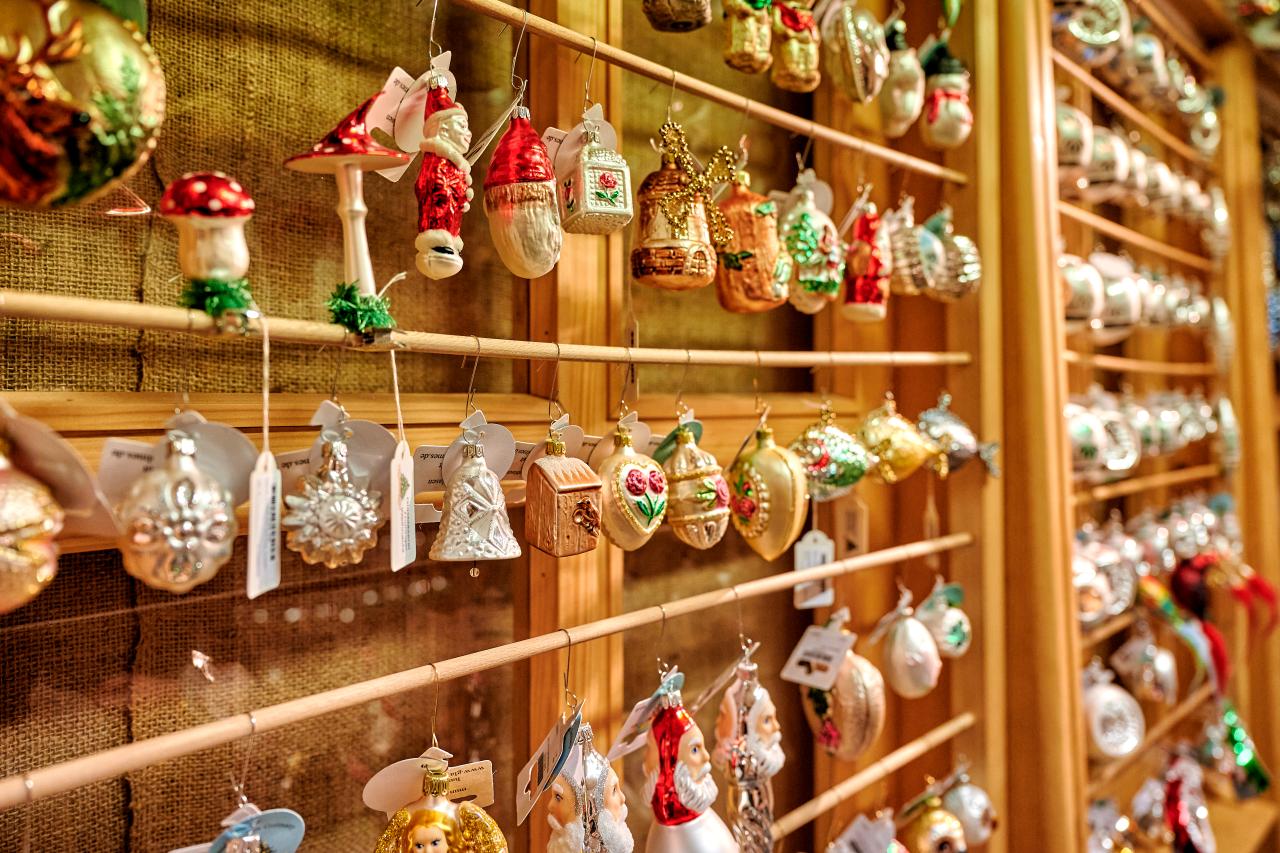 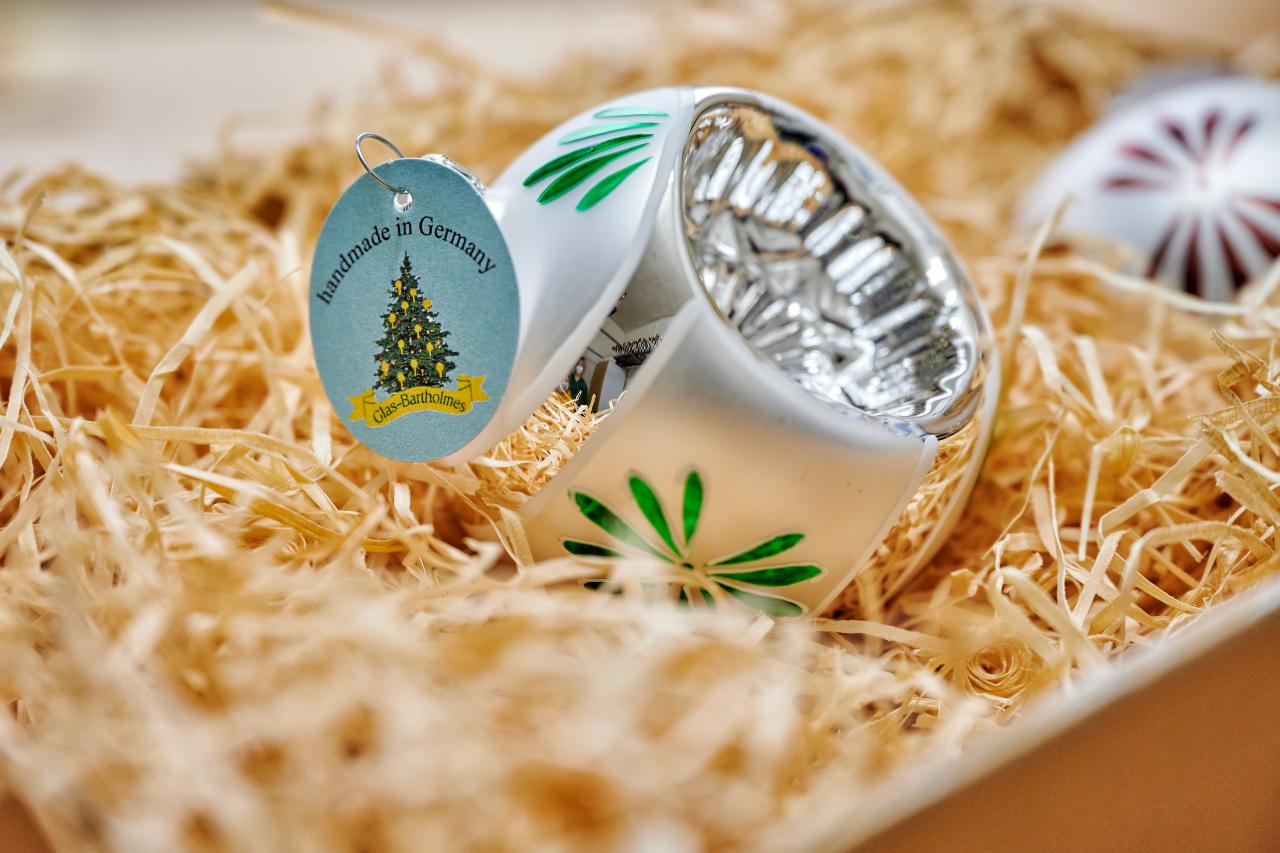 Today, this treasured heritage needs to be protected. Helmut Bartholmes is one of the people who have dedicated themselves to this cause through membership of the Lauschaer Glaskunst® trade association. Their brand provides a guarantee of exceptional quality for traditionally manufactured glass products. The aim is to safeguard the tradition and pass it on to further generations. The German Commission for UNESCO has recognised this endeavour by awarding intangible cultural heritage status to Christmas tree ornaments from Lauscha in March 2021. A high accolade for the region as well as motivation for the future.
The town of Lauscha, along with other towns and villages, including the toymaking town of Sonneberg, is set to become a year-round Christmas destination. A new, themed Christmas experience, to be known as ‘Weihnachtsland am Rennsteig®’ (Christmas World on the Rennsteig trail), is being created in the Thuringian Forest Nature Park. This will be a unique opportunity to bring the craft of glassblowing, along with porcelain production, papier mâché-making, woodcarving and toymaking, into the 21st century. The emblem of the new venture will be a Christmas bauble, of course, designed and handmade by Helmut Bartholmes. 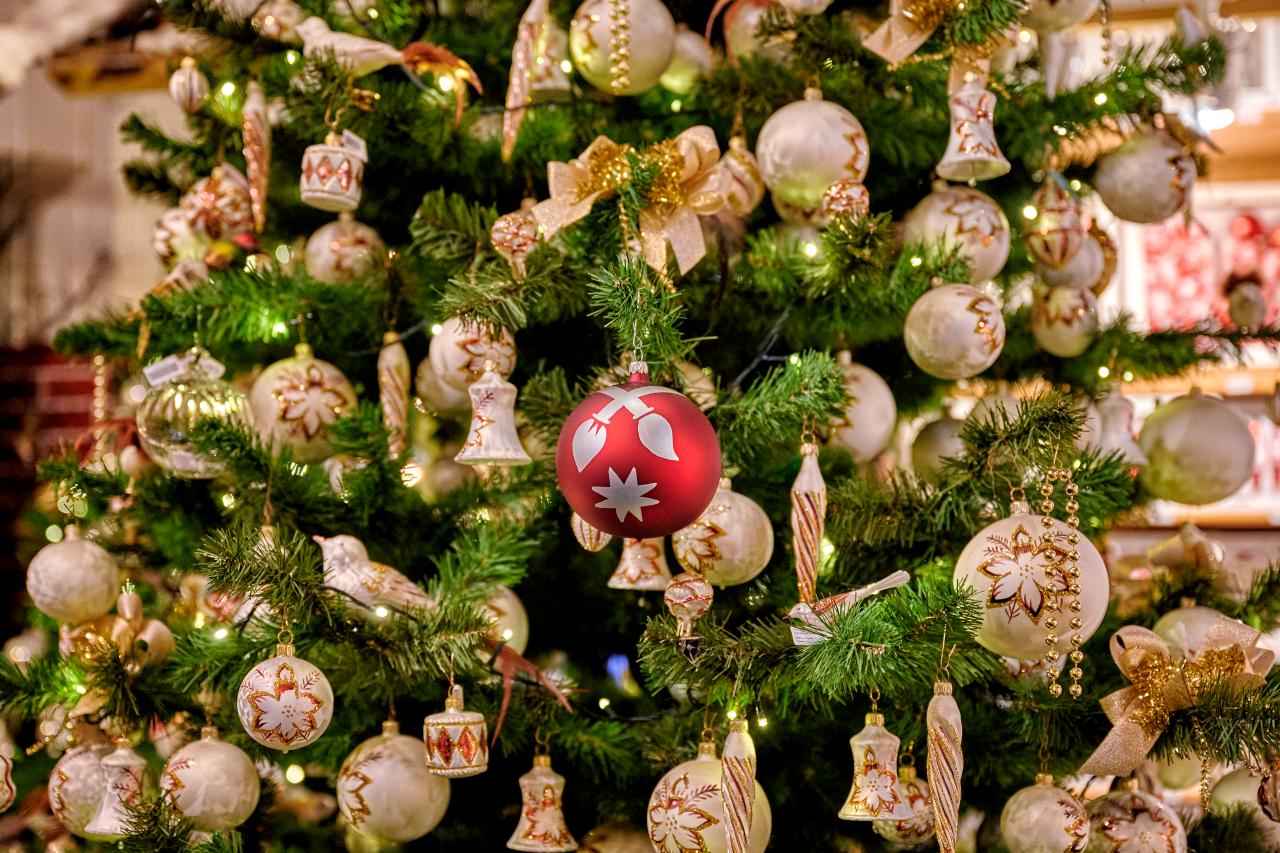 The ‘master bauble’, designed by Helmut Bartholmes of the Thüringer Weihnacht glassblowing workshop, will be the emblem of the Weihnachtsland am Rennsteig® Christmas experience. ©Florian Trykowski, Thüringer Tourismus GmbH