Music from the stars of tomorrow

The Weimar master classes are a wonderful opportunity for young musicians – and an absolute pleasure for the audience.

At one time, the master classes brought people from east and west together. Today, the event remains firmly established in Weimar’s academic and cultural life. And the classes are just as international as ever, with teachers such as the French oboist David Walter.

Guiding the sounds through the room

Sometimes he smiles, leans back and blissfully closes his eyes. Then he lets the playing continue, sometimes even to the end of the movement or the piece ‒ that’s when you know that he is thoroughly enjoying it. But that doesn’t happen often. David Walter is a world-class oboist. As well as composing, he also conducts ensembles and orchestras, and has a professorship at the Paris Conservatoire – a musician of his calibre can nearly always find something that will help his students improve the way they play.

In those moments, nothing can keep him in his seat. He jumps up, gyrates his arms like tiny windmills, swings his hips, and falls to his knees as if in prayer. Sometimes it is almost as if David Walter wants to draw the music out of his students’ instruments using his bare hands, and then escort it through the room to the open window. If you’ve ever wondered what it looks like when someone uses their whole body to make music, David Walter is a prime example. 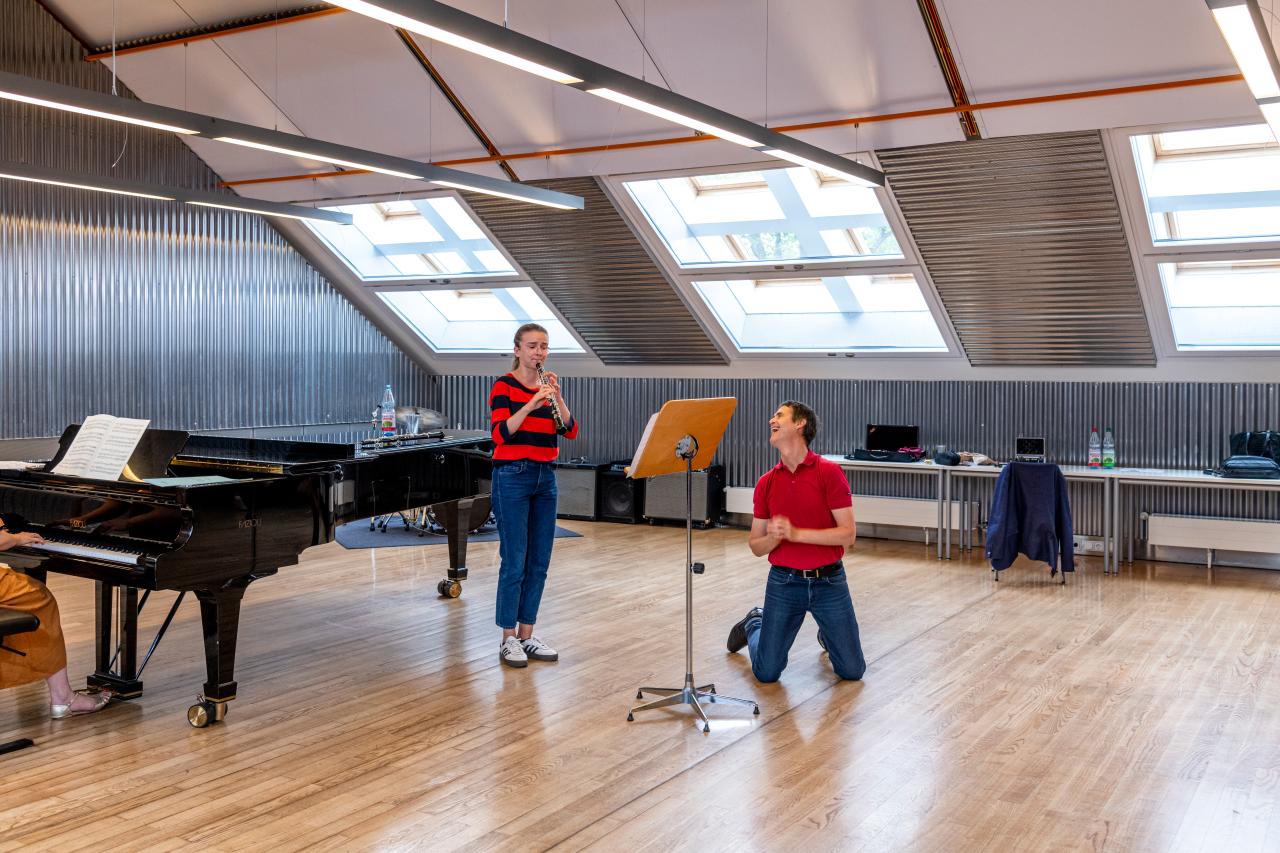 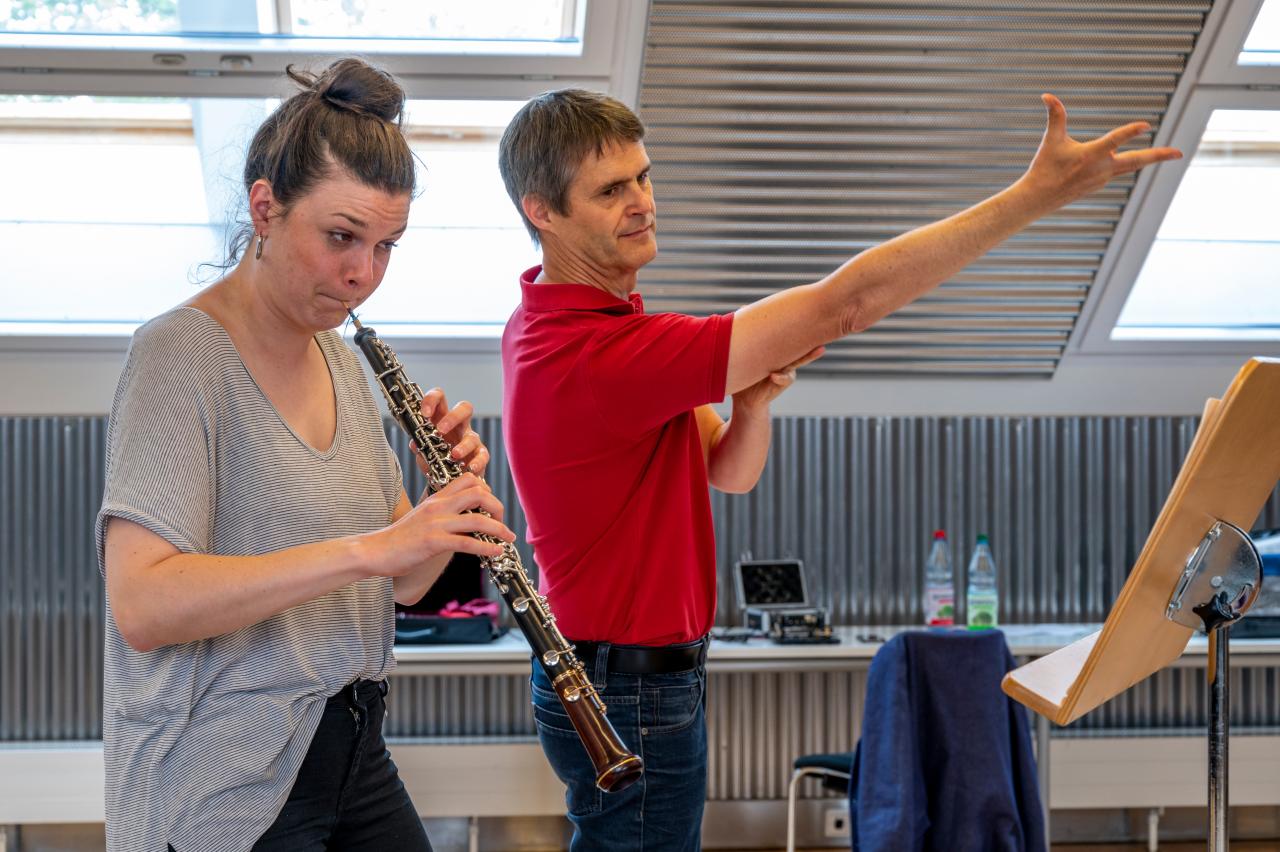 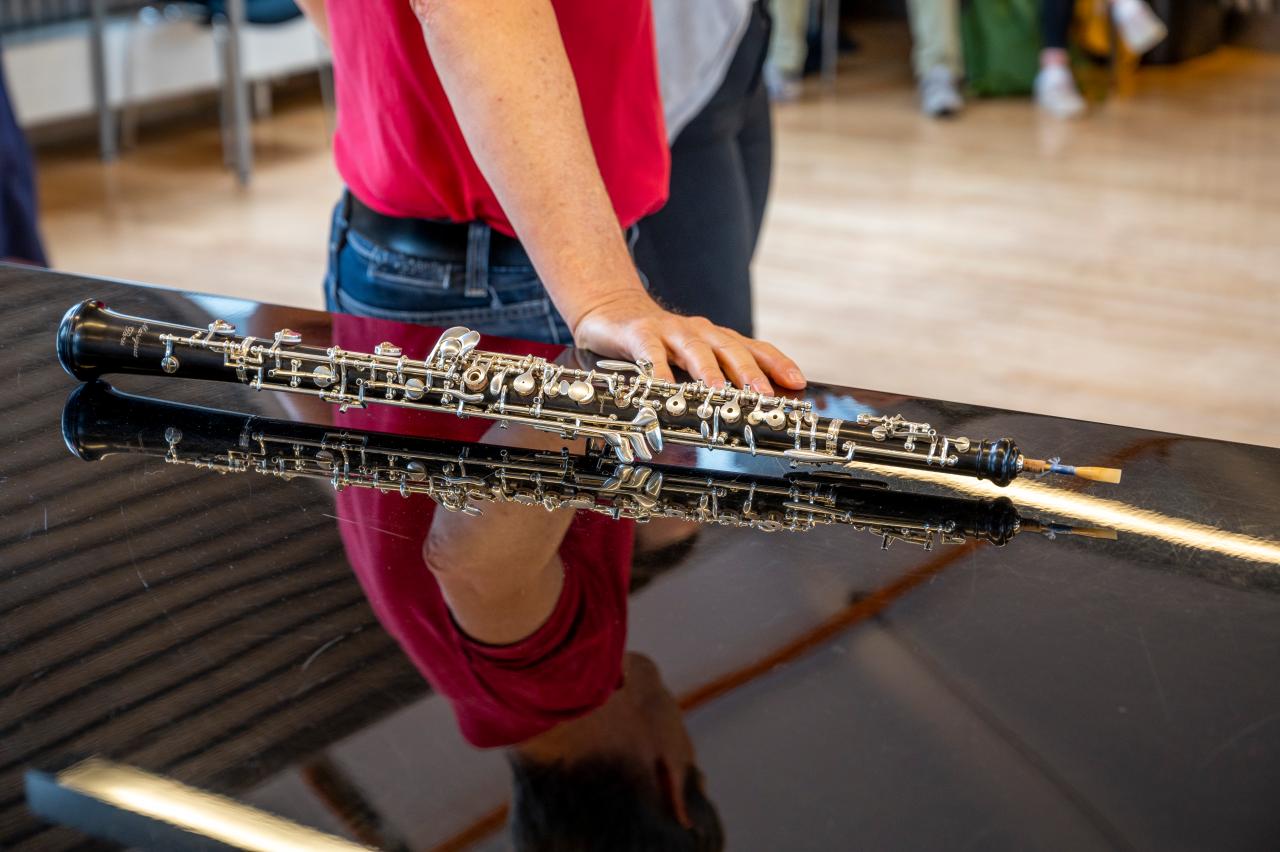 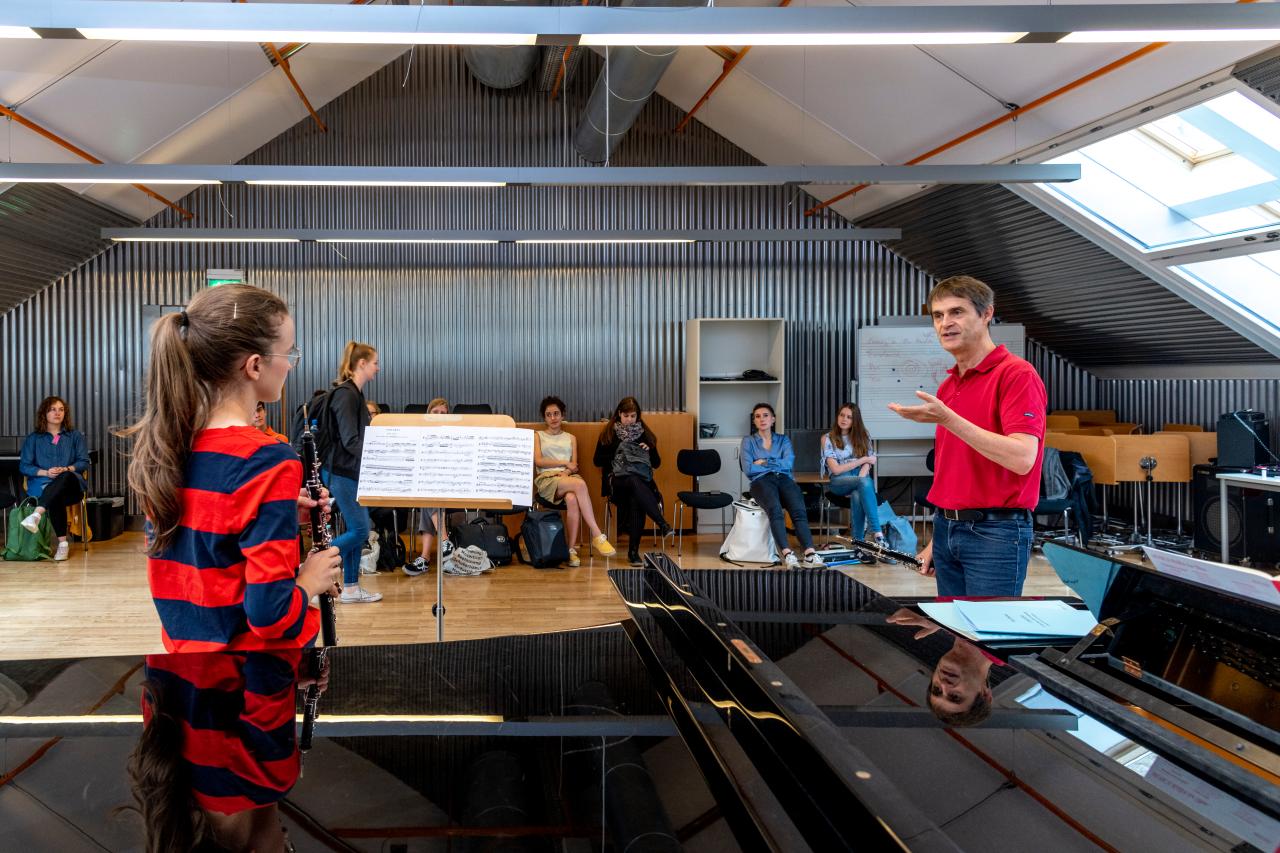 The Weimar master classes show very clearly how the interaction of young musicians from all over the world with teachers from the most celebrated music institutions can produce the sort of musical tension that creates real sparks, both in the rehearsal rooms and concert halls. What started out in the summer of 1960 as a musical encounter for east and west, bringing together musicians from both sides of the Iron Curtain, is now firmly established as an international event of the highest calibre. The master classes at the University of Music Franz Liszt are just as much part of Weimar’s cultural calendar as its famous arts festival. And the public concerts given by the students and teachers are among the highlights of the summer season.

“Pay attention to your breathing! It makes all the difference between a good musician and an excellent one!” That’s David Walter again. His student Viktoria Kassel, who comes from Ulm, is currently studying in London and has returned to her former university town for the class. Later she explains how much she values her professor’s refreshingly different approach. He has also taught her to be more assertive and self-confident in her performance ‒ he often demands that his students display a ‘here I am!’ attitude as soon as they play the first note, knowing full well that most of them are far too reserved. Perhaps that is why he is currently jumping up and down in front of her. He indicates with his arm how one passage of music should flow into the next, clenches his fists and raises his arms into the air. In those moments, he starts to remind you a little of Jürgen Klopp.

David Walter teaches classes like these all over the world. Time and time again, and always with the same enthusiasm. His students are like a big family to him, he says, since music knows no boundaries, which is more important than ever in times like these, and also almost a political statement.
“In my classes, it’s rarely about whether a certain quaver in a prelude by Chopin should be played more loudly or quietly. For me, it is far more important to dispel any sense of doubt that the musicians may have.” Very often these reservations have nothing to do with the music, says Walter. “What kind of person is my student? What have they experienced? What has made them who they are? Those are the questions that I am looking to answer. Then I can help.” Celebrated oboist turned psychologist? “Yes, you could see it like that.”

“The way a musician plays always reflects the person inside.” 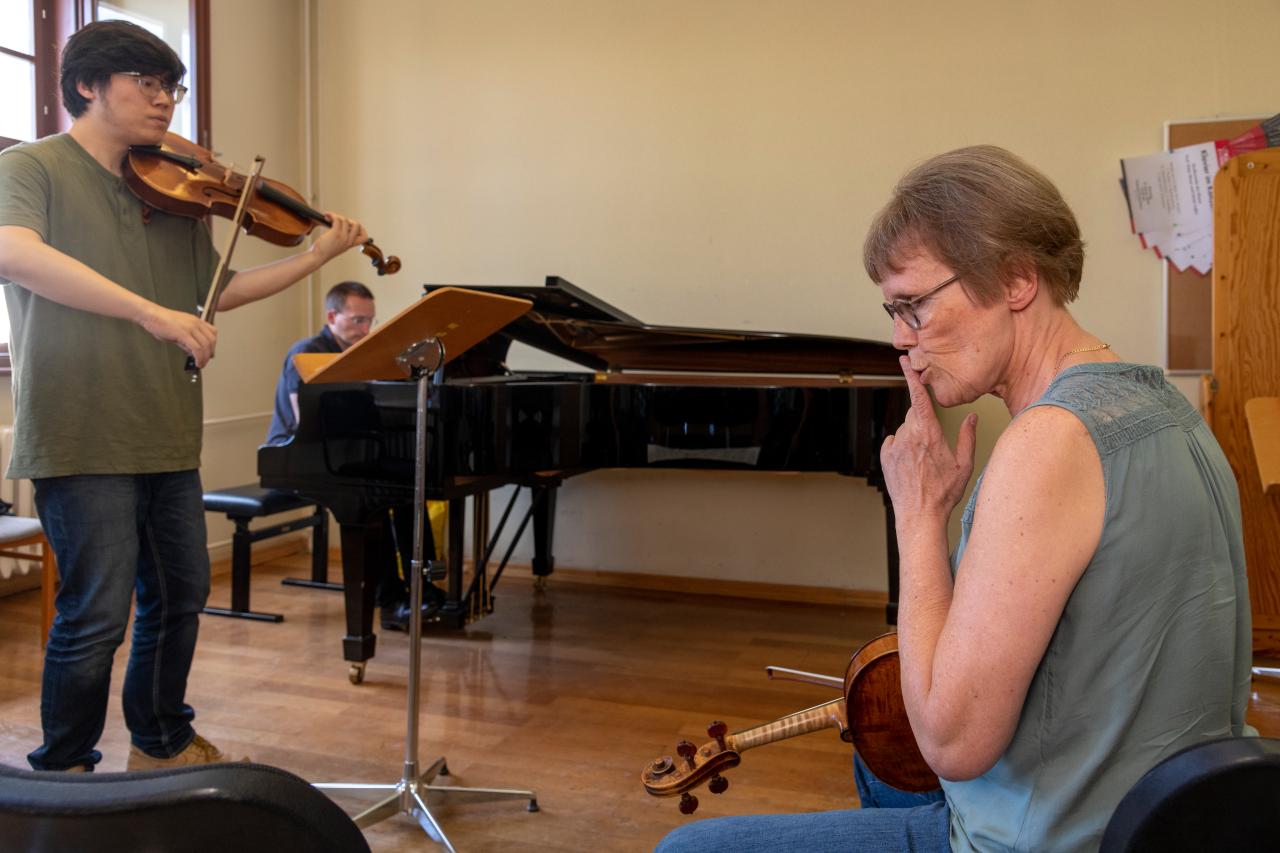 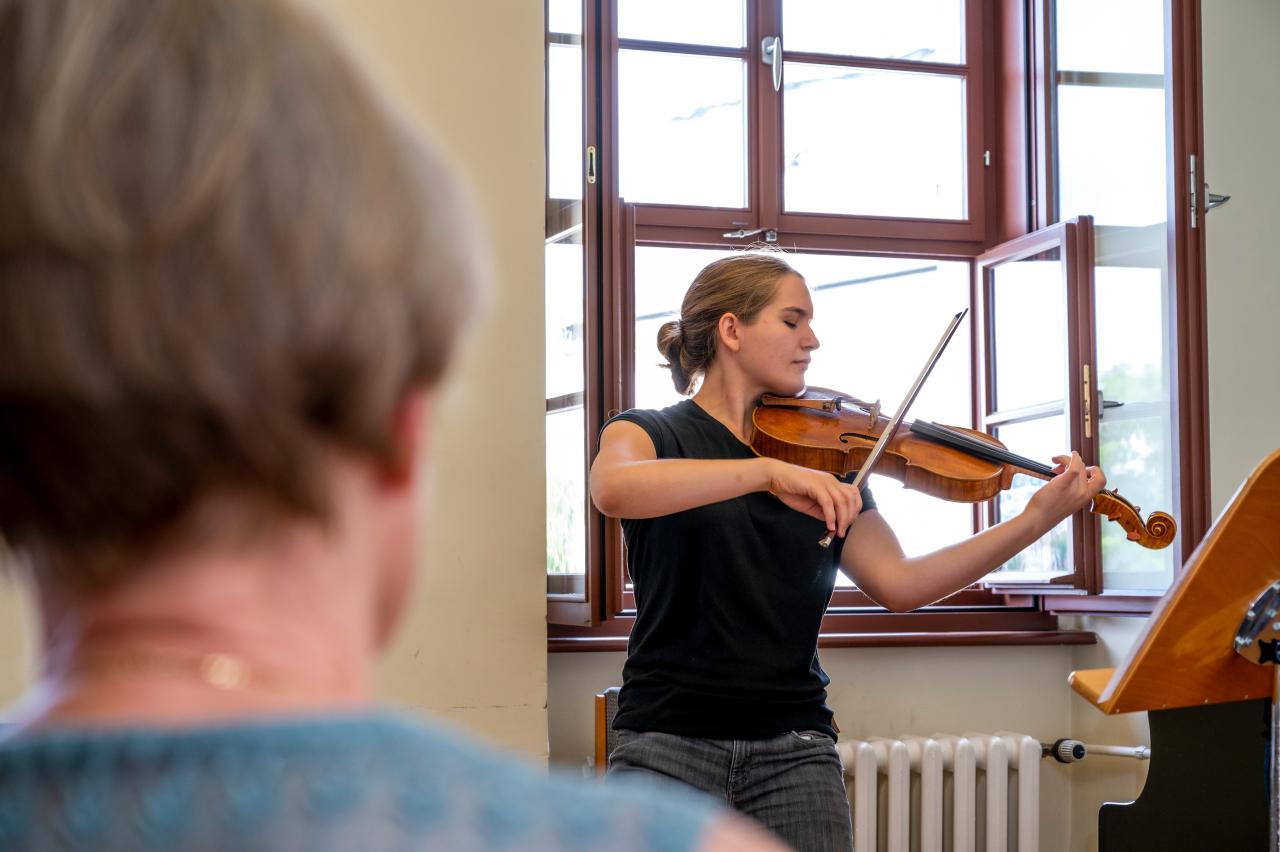 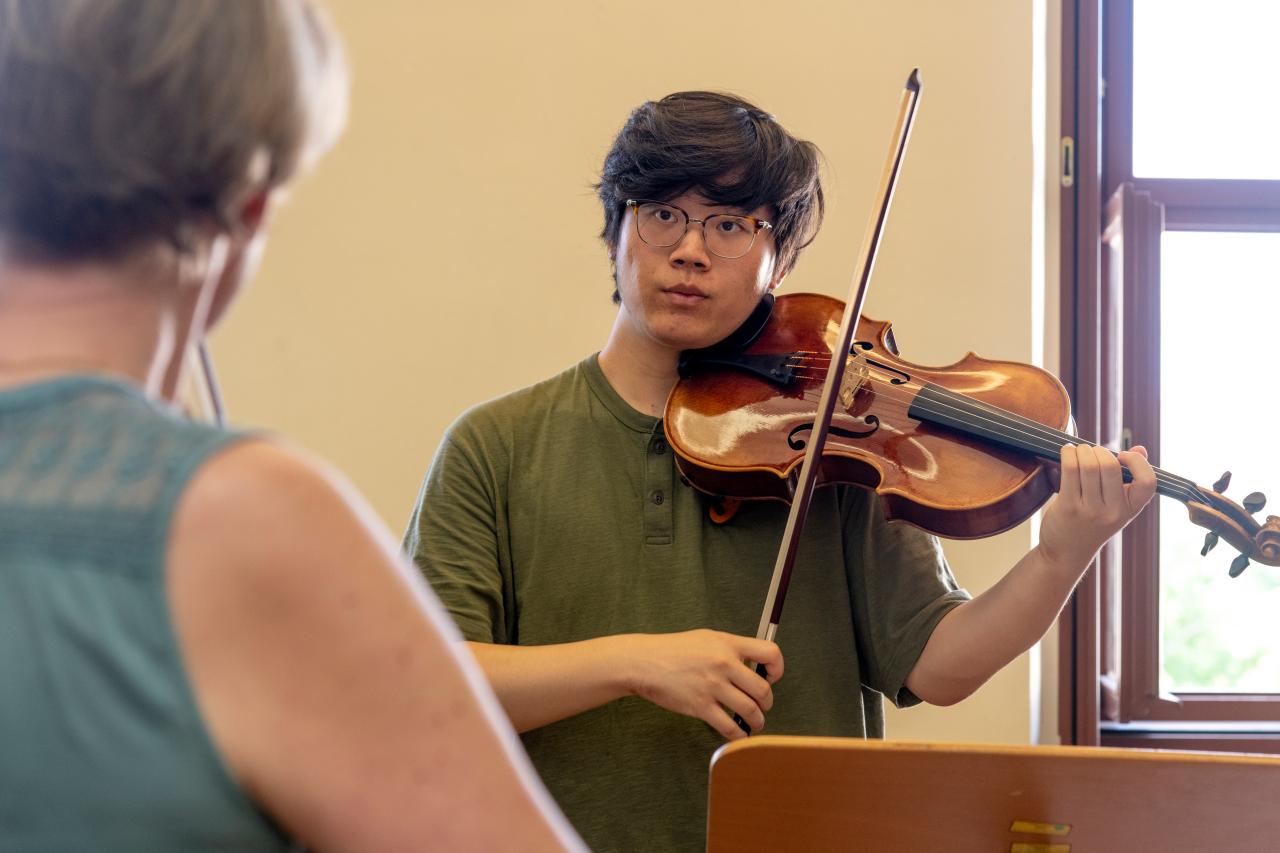 Barbara Westphal also places great importance on establishing a bond with her students during the relatively short duration of a master class. A violist and internationally renowned chamber musician, she has worked as a professor at the Lübeck Academy of Music for three decades. In her Weimar master class, she looks after up to eight students a day, so there is not much time to become closely acquainted. “But it is true what they say ‒ the way a musician plays always reflects the person inside”, she says, adding that this is the main reason why she still loves teaching. “I get to meet new people every day. And if I manage to give them one or two new ideas in class, then I have achieved my aim. Putting those ideas into practice can happen much later at home, whether that’s in Weimar or Beijing.”

Or in Spain. Adrian Verdugo Criado is 17 years old, comes from Madrid, and had searched online for courses that would help him progress with his music. In the end, he decided on Weimar, “because of the rich cultural history of the town.” He is already halfway through his master class. “It is completely different to my school in Madrid. The teachers here know what level you are as soon as you’ve played a few bars. And I expect to benefit from their advice for the rest of my career.”

Criado has to go now: it’s lunchtime. He joins his fellow musicians from Korea, Poland and Piedmont, and they can all be heard loudly discussing Hindemith in the stairwell. They will probably talk about music over lunch too. In the sixty years since master classes began, some 300 visiting professors have imparted their knowledge to many thousands of young musicians. Encouraged them and inspired them, praised them and gently corrected them, kick-started their careers or got them back on track. This summer, it is the next round of master classes, and the next group will be coming to Weimar.

Visit the stars of tomorrow

Every year in mid-summer, the Weimar master classes provide an opportunity to experience music in many different ways, as a visitor or regular member of the audience at the programme of concerts that accompany the classes and which feature performances by both the visiting professors and the students.
More on the master classes