Wagner was no stranger to Thuringia. He visited the Venus Grotto and Wartburg Castle, where he found inspiration for his opera Tannhäuser, stayed in Meiningen with the duke and his family and obtained a fake passport in Jena. His legacy reflects the way he lived his life – bold, unconventional and full of drama …

The rays of the evening sun fall through the windows of Wartburg Castle in Eisenach. By the time Tannhäuser reaches its dramatic climax it will have set. But we’re not quite there yet. Right now, the guests are streaming into the castle, which makes a magnificent backdrop for a summer’s concert evening such as this. The women are trying to get across the cobblestones of the courtyard without damaging themselves or their stiletto heels (‘Squire George’ probably had an easier job in that regard), while the men – mostly in black – offer their support. 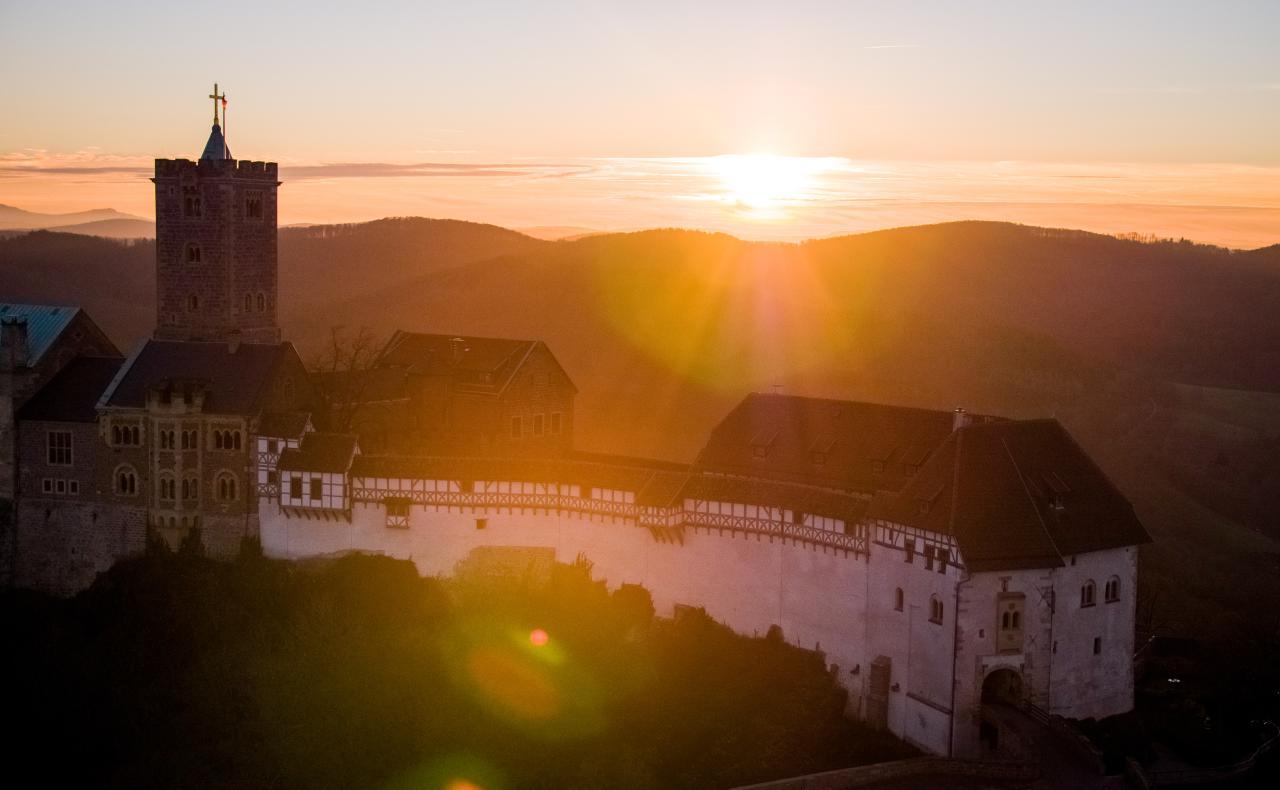 The castle tavern is selling sparkling wine and beer, along with slightly less refined Frankfurters and pretzels to go. Some concertgoers are watching proceedings down below from the windows of the arcade walkway of the main building. A beautiful scene.
There can hardly be a more evocative place to enjoy Richard Wagner’s opera Tannhäuser than its original setting. Wagner visited Thuringia repeatedly, finding inspiration for Tannhäuser at Wartburg Castle, staying in Meiningen with the duke and his family and even obtaining a fake passport in Jena before his escape to Zurich in 1849. 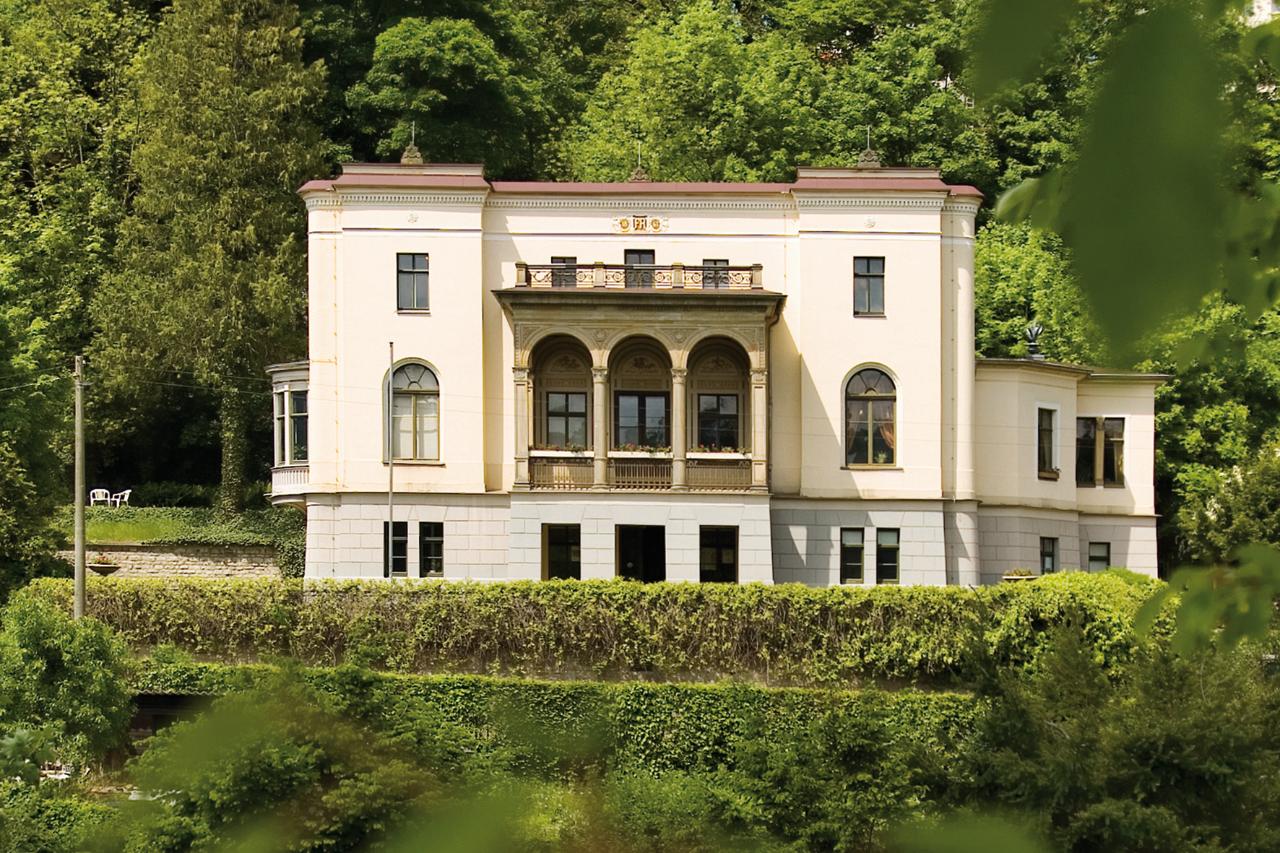 At the foot of Wartburg Castle lies the town of Eisenach, which boasts a wealth of musical heritage. A particular highlight is the Reuter Wagner Museum, whose Oesterlein collection is the most comprehensive Wagner archive after Bayreuth’s. The collection consists of around 5,000 books, musical scores, letters and the handwritten Rienzi score. The Reuter Villa, which houses the museum, also contains a square piano on which Richard Wagner used to play as a boy.
Another fascinating exhibit is a timeline showing what else was going on during the 19th century while Wagner was busy composing. In 1854, when Wagner premiered The Rhinegold, Cologne Cathedral was finally completed. 1874 was not only the year of the Twilight of the Gods, but also saw an assassination attempt on Otto von Bismarck. So what else was going on in the Tannhäuser year of 1845? Alexandre Dumas published The Count of Monte Cristo, and mass production of pocket watches began at Glashütte. In his opera Tannhäuser, Richard Wagner commemorates a legendary battle of the bards in music. As the sounds of the overture begin to fill the Festsaal concert hall at Wartburg Castle, the emotional response of the audience is palpable, even though for many of them it is not their first time listening to Wagner’s music in this very special place.

“Our aim is to become to music what Marburg is to literature,” says Reinhard Lorenz, head of Eisenach’s culture department, who is more of a jazz fan than a Wagnerian himself. Apart from its associations with Richard Wagner, the town also has the Bach House, a multimedia venue that is a big draw for music lovers. And there is a pop and jazz archive that is without equal in Europe, although hardly anyone knows about it (yet).

The Lippmann + Rau musik archive is located on the outskirts of the town in the  Old Malthouse, a distinctive timber-framed building with a jazz cellar. It houses around 150,000 items of recording media and 80,000 books and magazines. Once upon a time, malt coffee was produced here. Now the history of popular music is stored in the spacious lofts, attracting researchers and enthusiasts in equal measure. It’s quite cosy here, between the jukebox, the gramophone and all the shelves stacked high with music. This would be a great place to get locked up in overnight, enabling you to go on your own personal musical journey by playing one record after another …

At Wartburg Castle, Tannhäuser is fast approaching its dramatic climax as the sun disappears behind the mountains. Darkness is descending on Tannhäuser as well. Only in death will he find release. In the twilight of the concert hall, the music is rising to a crescendo. “Whenever I am touched by a note from Richard Wagner, I am deeply moved,” is how Dr Nike Wagner, Wagner’s great-granddaughter, explains her own personal feeling about Wagner.

The famous Meiningen Theatre also keeps returning to Richard Wagner. The composer knew the town personally, having visited it for several days, and he regularly hired musicians from the Meiningen Court Orchestra to play at the Bayreuth Festival.
Read more here

To fully understand Richard Wagner, you will also need to look at his great advocate, Franz Liszt, and at Weimar, the home of German Classicism. Until 1861, Franz Liszt worked for the Weimar Court Orchestra. While he was in charge, it premiered Wagner’s Tannhäuser and Lohengrin, among other works. Franz Liszt’s daughter Cosima went on to marry Richard Wagner.
Read more here