And, as the lights gradually come on in Café Stilbruch and the other welcoming bars on Wagnergasse, our gaze extends beyond the houses and lanes to the winding Saale river and to the natural scenery that seems to be pushing its way into the city from every direction. To the hills ‒ Kernberge, Sonnenberge, Hufeisen and Jenzig ‒ in short, to all the places that this wonderful walking trail, the SaaleHorizontale, will take us tomorrow and the day after. 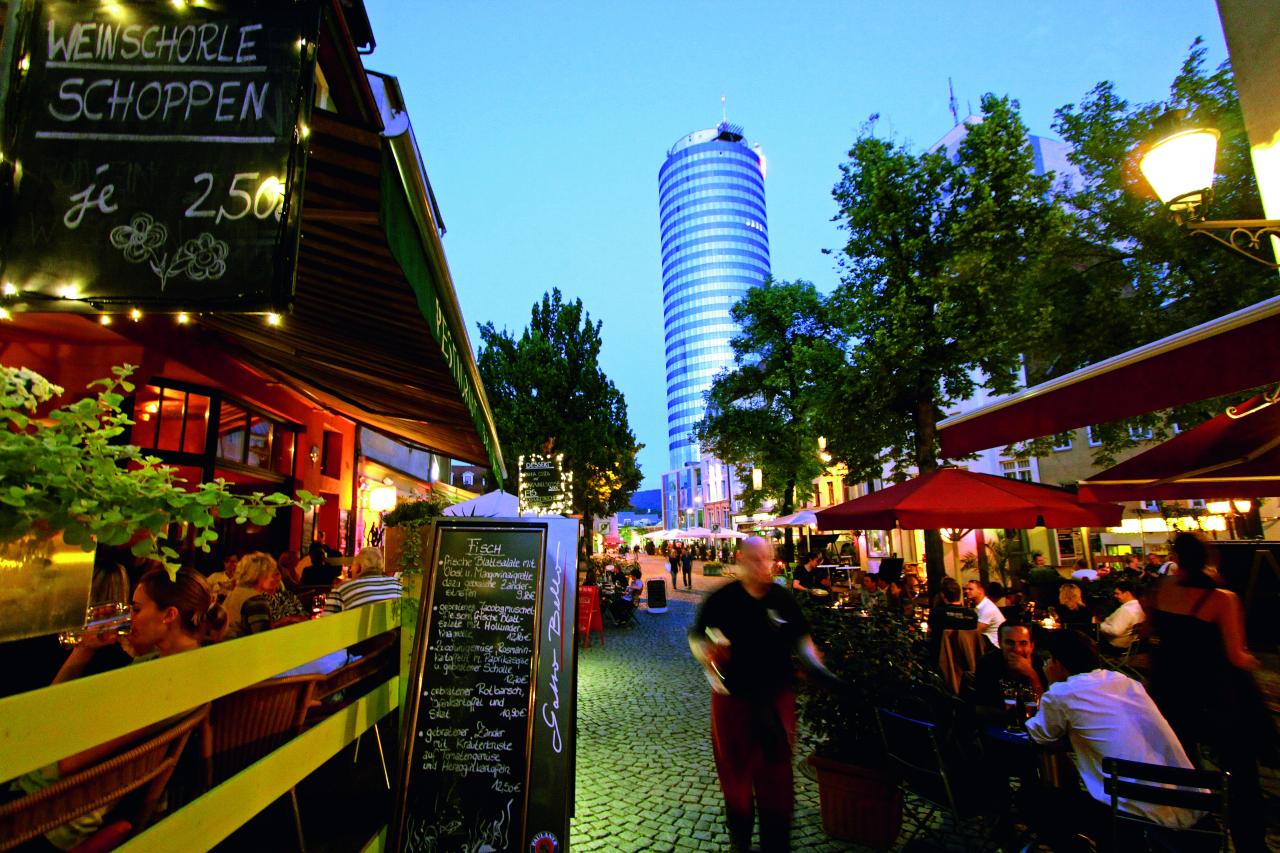 But for now the walkers are still standing on the JenTower‘s observation platform. The panoramic views from up here are nothing short of spectacular, well worth a minute’s ride in the elevator and the €4.50 admission. From this vantage point, you would never tire of looking at the city. There it lies, like a huge, comfortable bed, surrounded by hills like a fluffed-up feather quilt. The tower stands 150 metres tall, and was built at the heart of the old quarter in 1972. It doesn’t exactly blend in with its surroundings, but nonetheless it is a statement, a modern landmark and a symbol of this region’s ambition. Thuringia’s second-largest city is renowned as a high technology hub, and it is growing. Some 111,350 people live here, a quarter of them students. It has youth, dynamism, progress, knowledge and confidence. In days gone by, the students used to sing about the good life in Jena, and you can begin to see why. 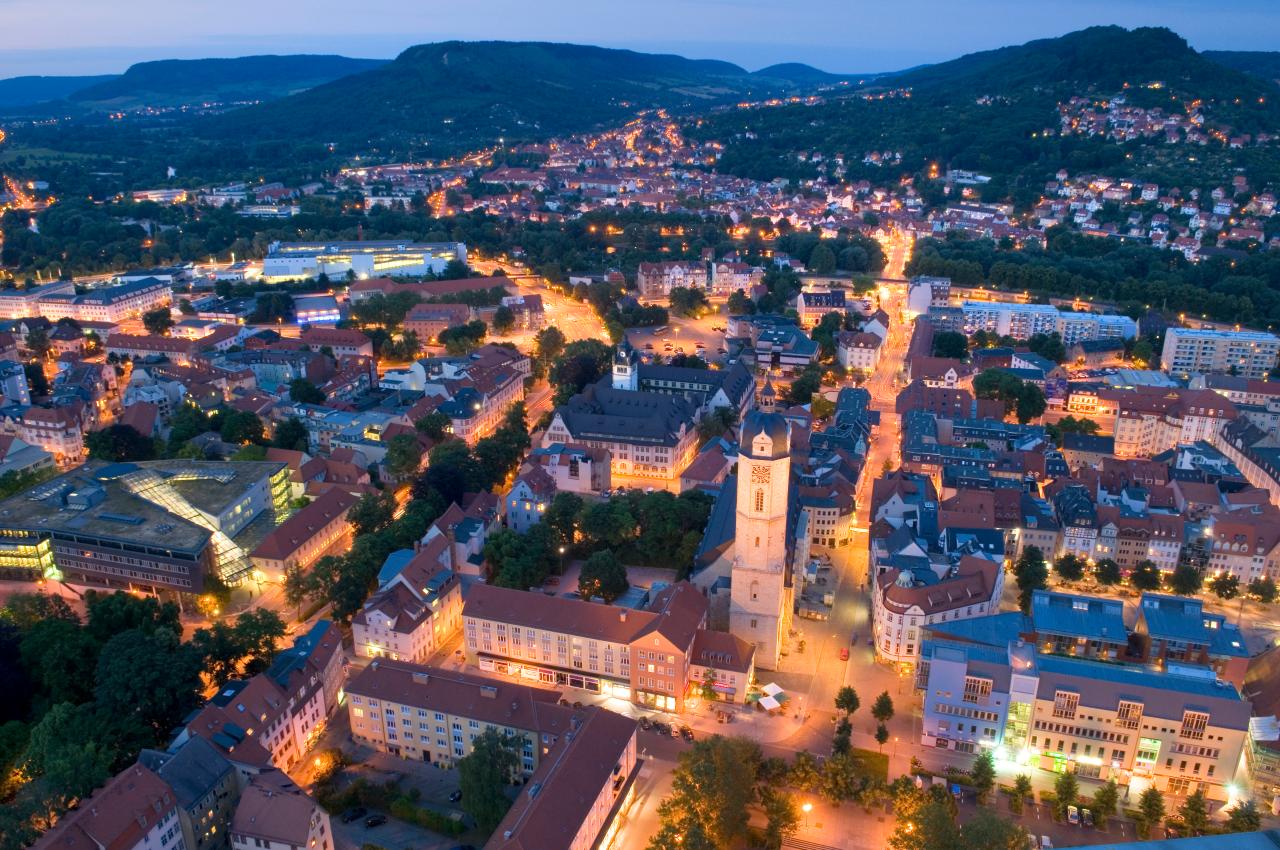 The area around Jena is great for walking. The SaaleHorizontale walking trail, which winds its way around the city for 72 kilometres, is an absolute delight for hiking enthusiasts, not least because of the amazing views. If you walk the trail from the south, from the starting point in Lobeda, you are soon treated to stunning vistas of Jena ‒ especially between Fürstenbrunnen spring and Studentenrutsche, where it becomes narrow and exposed, and hugs the steep fossil-flecked limestone slopes. At this point, you are high above the city, with impressive panoramic views opening out in front of you. The noise from the city is muffled, and the hustle and bustle appears inconsequential from up here. You feel at one with nature, and that instils a sense of calm. But do stay alert, as the ground falls away steeply right next to you. Sure-footedness is called for! You could almost imagine that you are in the Alps, right here in the heart of Germany. Eventually, the ambient hum of the city dissipates and the sounds of nature take over. You suddenly find yourself deep in the middle of a beech forest and far away from Jena. This turns into a sparse copse of black pine, followed by meadows where up to 30 varieties of orchid grow. Time for a break in the cosy beer garden at Fuchsturm tower, before returning once again to the lush green of the beech forest. You begin to notice a different scent, different light and a growing feeling of being part of nature. Then, all of a sudden, you catch a glimpse of the JenTower between the trees, and the city gradually comes into view once more. This interplay between the urban and natural landscape is a recurring feature all along the route. 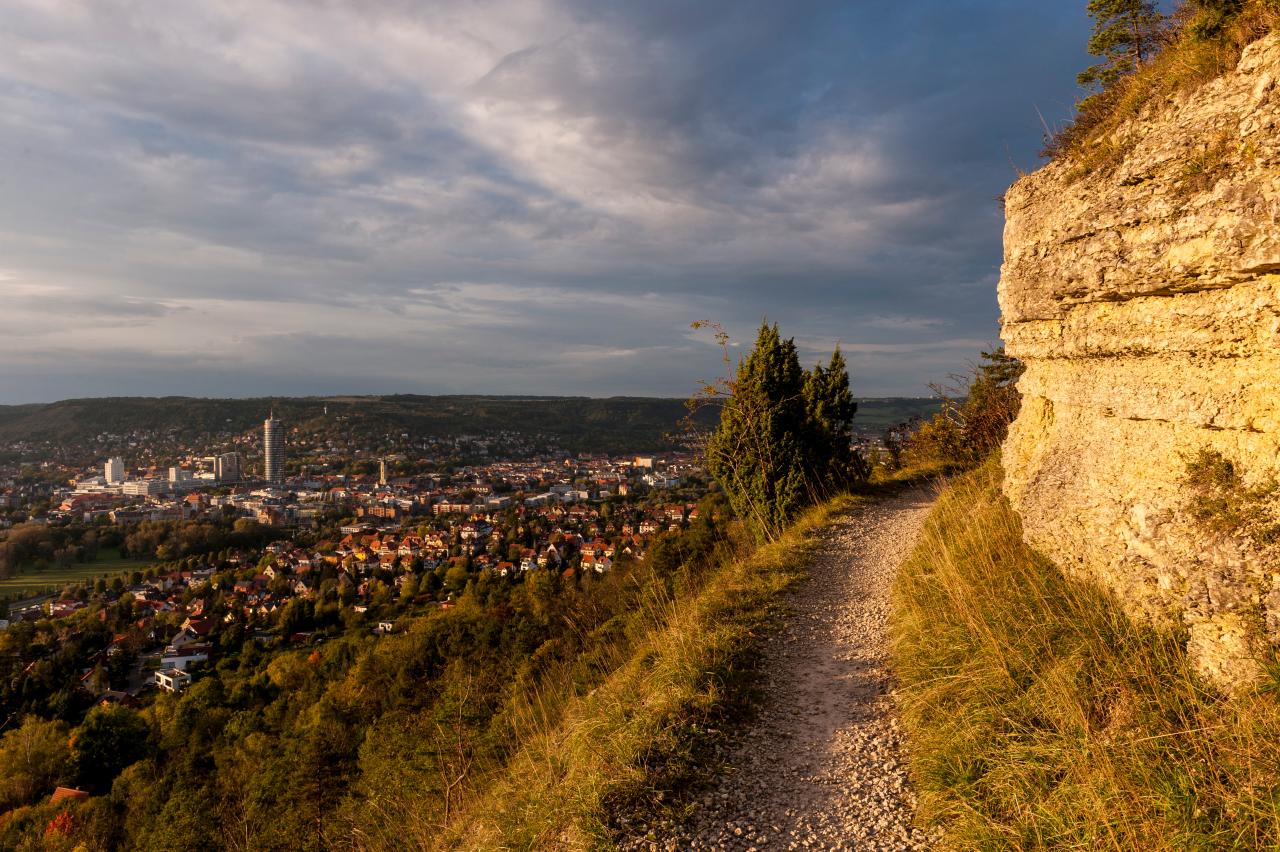 That sense of being at one with nature yet never far from the city continues as we reach our destination for the first day: the Jenzighaus. This traditional restaurant backs onto the forest, but its terrace offers sweeping views across the rooftops of Jena. The Jenzighaus is not easily accessible. To get there, you either have to make your way along the SaaleHorizontale trail or walk up from the city below, which takes a good 30 minutes. Hardly anyone drives up. “People are worried about their cars on the tight corners,” says restaurant manager Annette Goldstein. “There’s only one taxi driver who is willing to come up here.” As well as the staff, of course, who know how to navigate the treacherous hairpin bends.

The Jenzighaus restaurant makes for an ideal retreat because of its exposed yet secluded location. Before long, a sense of tranquillity sets in and everyday stresses fade away. But it wasn’t always like this. For a long time, it stood forgotten and neglected on this spectacular ridge. Annette Goldstein explains that her boss brought the restaurant back to life in the winter of 2011, as she puts a hearty herb roast with Thuringian dumplings on the table in front of us, along with a glass of Apolda Glockenpils beer. Thankfully, weary walkers don’t have far to go for a good night’s sleep either, as there are four comfortable double rooms available upstairs. 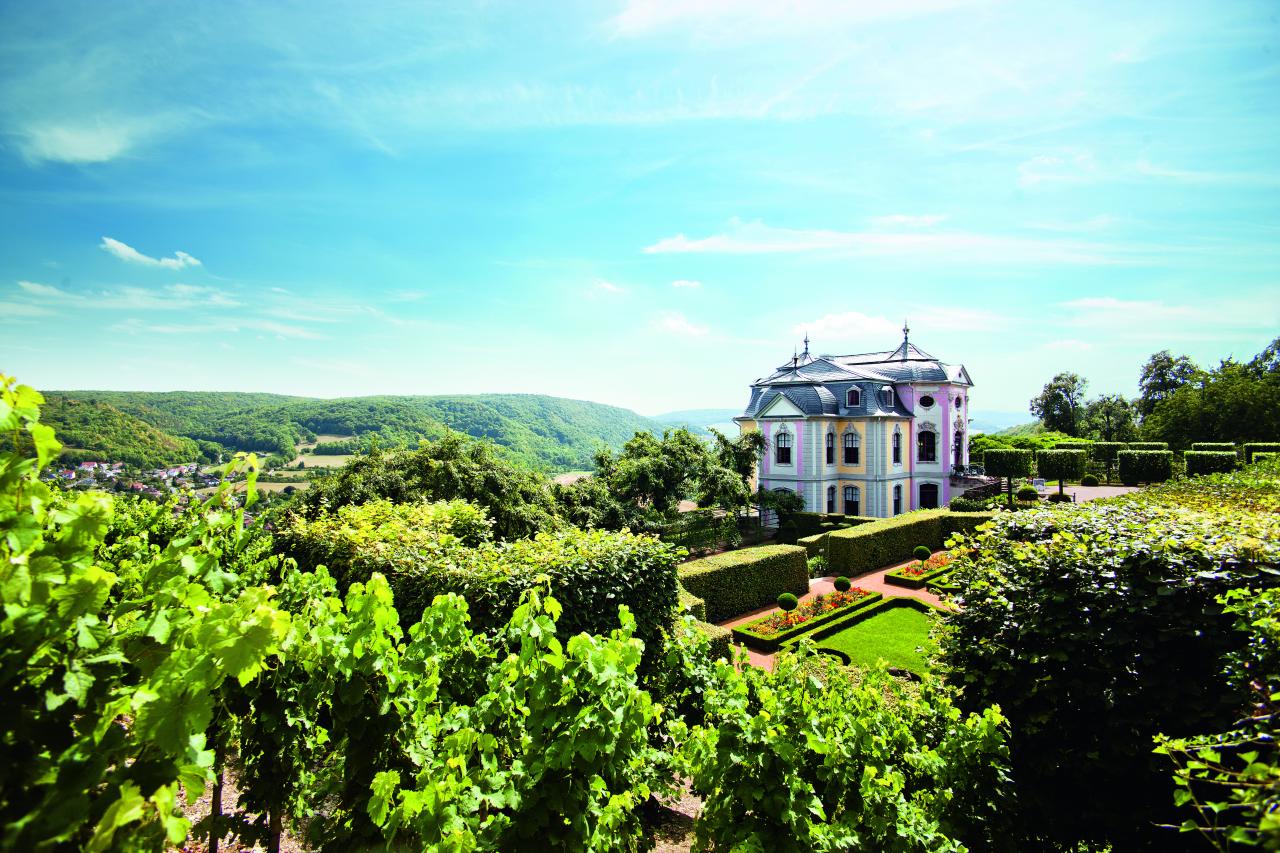 Breakfast is at 8am. It takes a good few hours to walk the 25 kilometres or so to the Dornburg Palaces, the destination for this weekend’s walk ‒ especially as the trail turns briefly from horizontal to vertical at various points along the way. But first we’re heading down through the beech forest to Laasan, a charming little village with a pretty half-timbered town hall, which is tucked away in a side valley. Jena has now disappeared behind the hills. The terrain is characterised by rolling hills, interspersed with dense forests. Beutnitz comes into view, and the route continues through meadow orchards to the rocky Zietschgrund valley and into Tautenburger Wald forest.

The warmth of the sun penetrates the beech foliage. You get into your stride, your weary legs are forgotten, thoughts come and go, and the rhythm of the walk takes over. Suddenly, you catch sight of them: the Dornburg Palaces, all laid out before you, 90 metres above the Saale valley, looking as if they were floating on air. To the east, the Renaissance Palace, where visitors can gain an insight into the life and work of Goethe. To the west, the Old Palace, which harks back to the days of Emperor Otto I. And in the centre ‒ a true sight to behold ‒ the Rococo Palace, which showcases the dining traditions of the royal court. Four hectares of parks and gardens, modelled on the English and French styles, connect the three buildings to form a majestic ensemble. Time is rapidly marching on. In the evening sun, the rose arches and pergolas at the Dornburg Palaces are casting long shadows, creating a romantic mood. 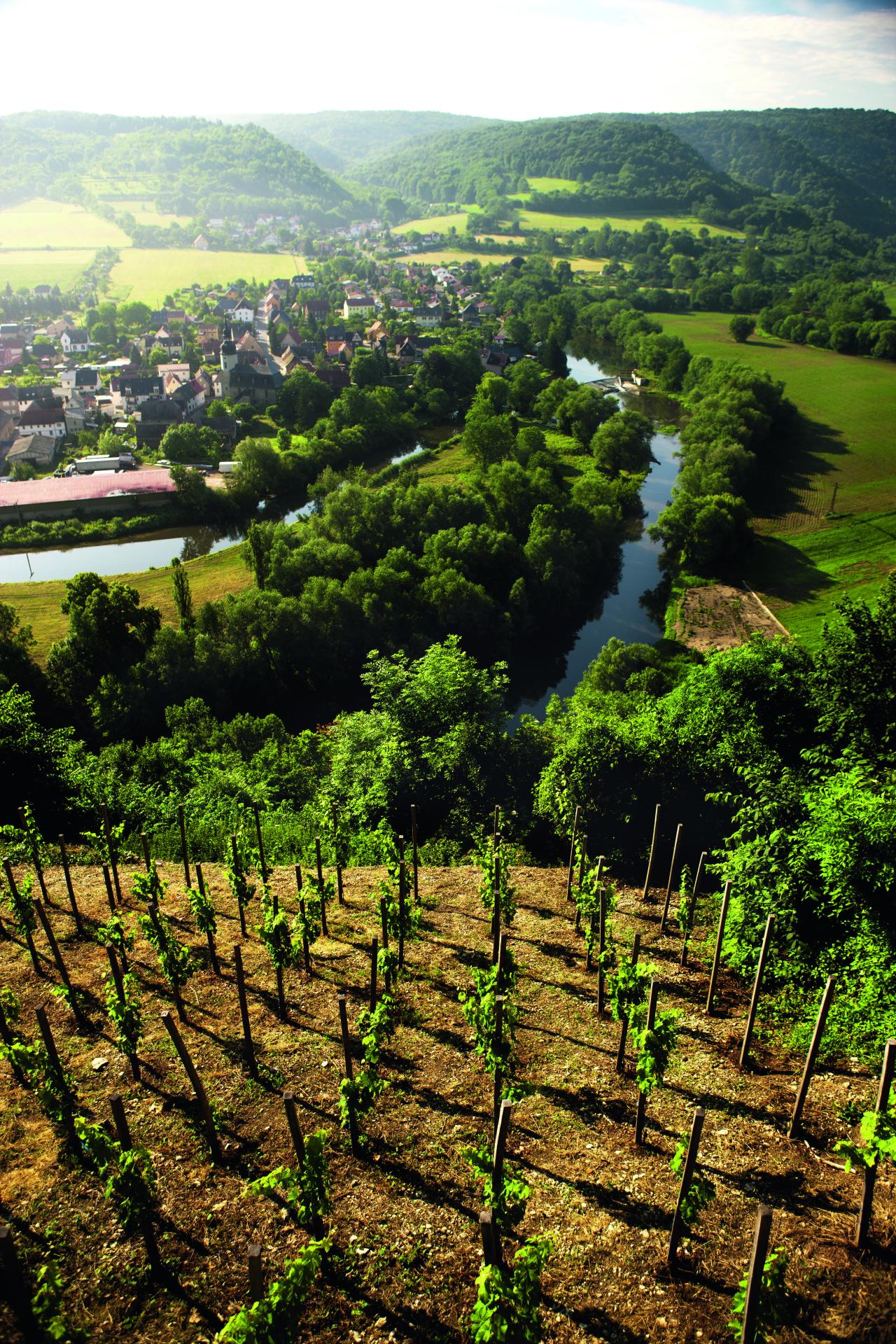 Weary from the day’s walking, you sit on the wall in front of the palaces, with the lush green vineyards down below, and look back at the route you’ve covered ‒ the ruins of Kunitzburg Castle, the Jenzighaus restaurant, Fuchsturm tower, Sophienterrasse, and the meandering river Saale. Far on the horizon, the JenTower glistens, and the city is covered in a hazy glow. You slowly leave nature behind as you ease yourself back into civilisation.