A globetrotter on staycation

History lessons at the House of the Weimar Republic

Always carry a bit of home in your heart

Whenever I travel I get asked lots of questions about my home. Most people have never heard of ‘Thüringen’ or even Thuringia. Admittedly, it’s a bit of a tongue-twister in English. I explain to them that it is a federal state, located in the heart of Germany. And then I tell them about Wartburg Castle, the Thuringian Forest and historical towns such as Weimar. Once I mention Weimar, there’s often a hint of recognition from whomever I’m talking to. They rack their brains and frequently reply something along the lines of “Ah yes, of course, the Weimar Republic.” I usually smile and nod, but I have to admit, I can’t contribute much in the way of additional information. History has never been my strong point. And that has been nagging me for quite a while. I’ve been asking myself why so many people all over the world have heard of this Weimar Republic. What exactly happened back then, and why was it so important?

So I decide to go exploring a bit closer to home for once. Travel broadens the mind. But to misquote Goethe “Why roam abroad when the good lies so near?” So on my free weekend I get in my little car and head to Weimar. The last time I came here I was still at school. We went to visit the Goethe National Museum and the Buchenwald memorial site on a school trip. The historical centre of this buzzing cultural hub has lost nothing of its charm since then. I stroll around the pedestrianised streets for a bit. The sheer number of visitors drives me more or less on autopilot to Theaterplatz square with its Goethe and Schiller statue, a very popular photo subject for the many tourists. And here I find what I’m after – the ‘Haus der Weimarer Republik’, according to the large letters on the front of the building opposite the German National Theatre. That’s where I’m going today. They could not have chosen a better venue for this museum. In 1919, the National Assembly convened at the German National Theatre. Exactly one hundred years after the Weimar Republic was founded here, a museum opened in this authentic location. With its large windows and a direct view of the busy Theaterplatz square, it is a memorial site with relevance to the present day as well as a forum for democracy. 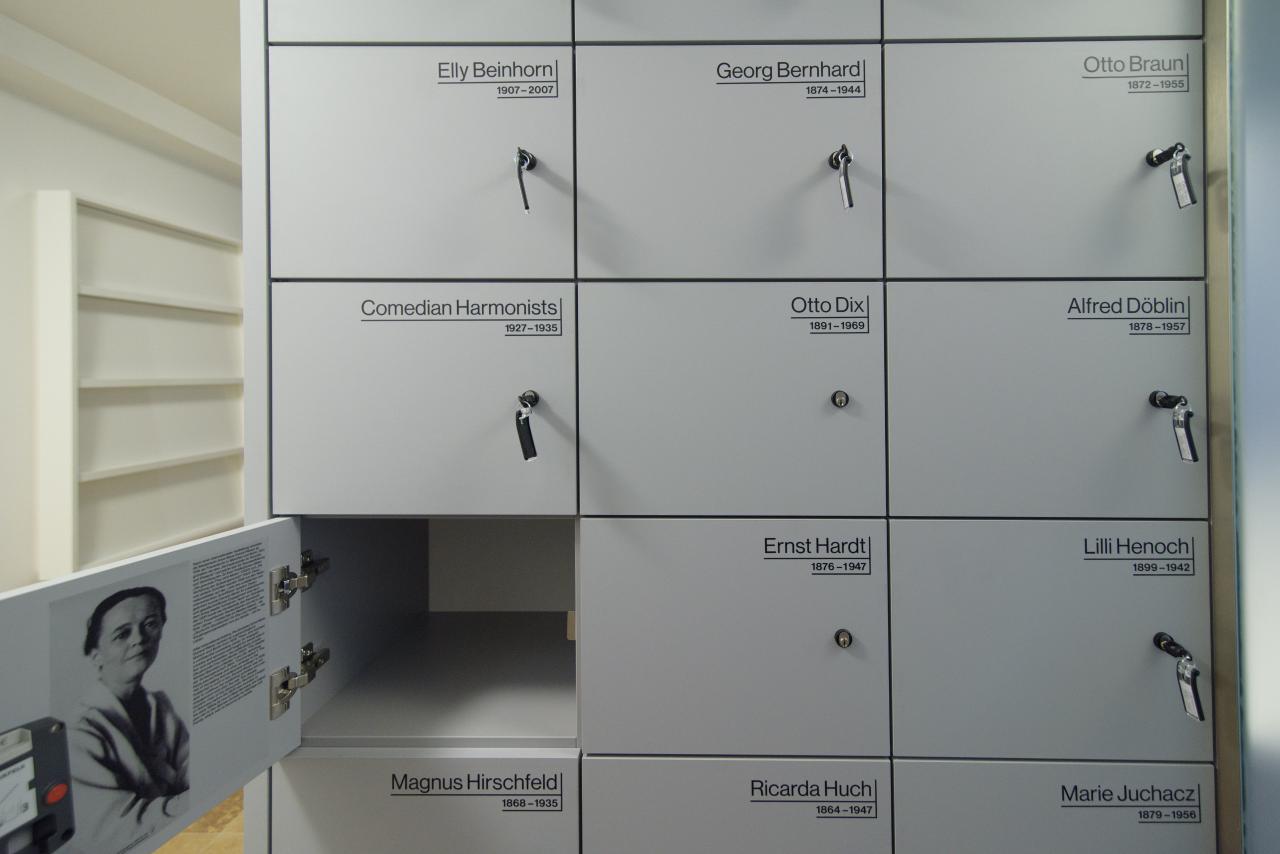 Each of the lockers at the museum carries the name of a notable figure from the Weimar Republic period ©Candy Welz, Weimarer Republik e.V.

We start with a film

I enter the building. The longish foyer is intended as a small visitor centre. You can divert straight to the café, consult a map to find other sites related to modernism in Weimar or simply buy a ticket for the exhibition, as I’m doing today. My journey back in time begins with a short film in the small cinema auditorium. The cinema is free of charge – ideal for curious visitors wanting a taste of the exhibition – and offers a multimedia introduction to the history of the Weimar Republic. Right next door I can drop off my bag. The lockers carry the names of famous Bauhaus artists, as well as actors and politicians of the period. Quite an amusing idea, I think, and I opt for the Comedian Harmonists.

The exhibition itself consists essentially of a single room with a large, bright skylight, and is accessed via the ‘Revolution Passage’. Here, the end of an era and the ensuing transition from the rule of the Kaiser to German democracy around the time of the First World War is impressively conveyed. I learn that the Weimar Republic only lasted for a relatively short time, from 1919 to 1933. 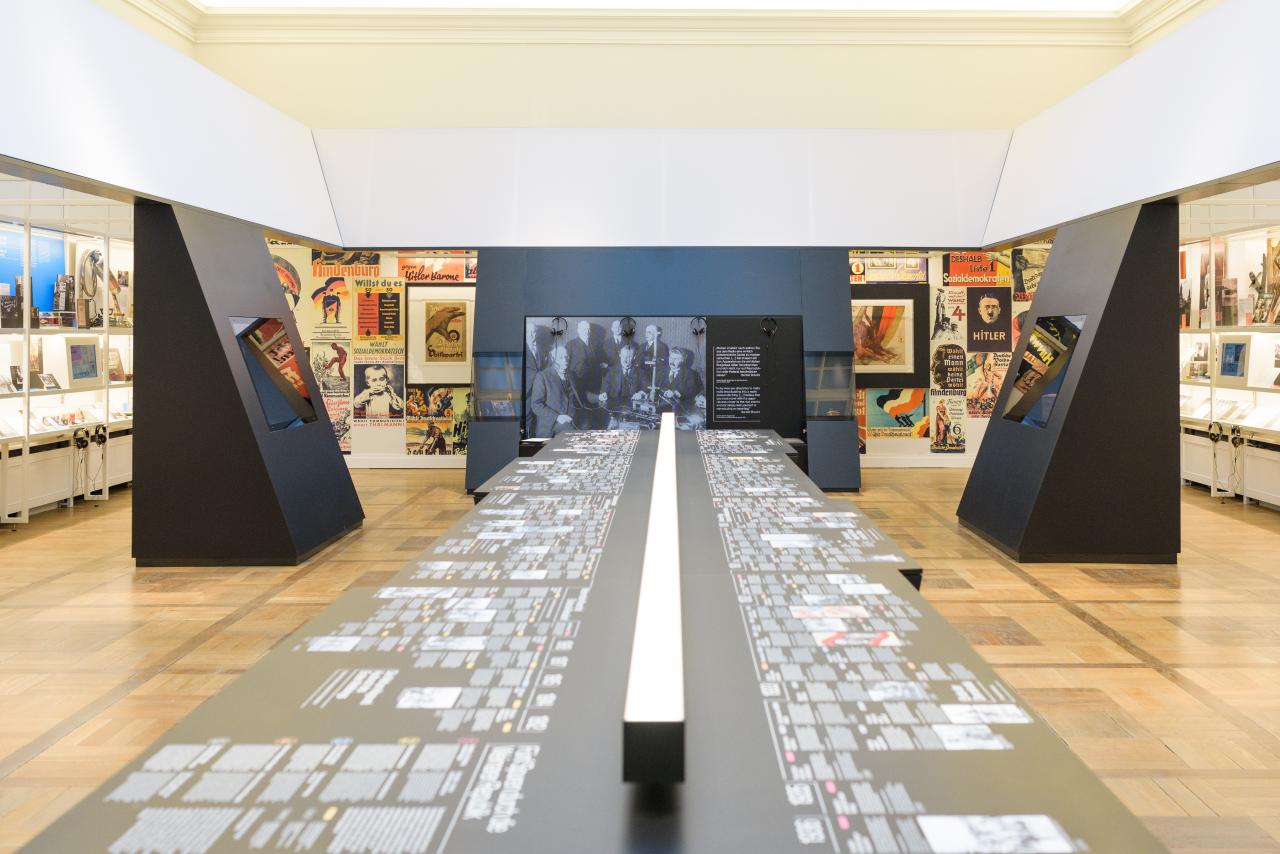 The timeline at the exhibition in the House of the Weimar Republic provides orientation ©Candy Welz, Weimarer Republik e.V.

An exhibition space with ‘time capsules’

The Revolution Passage contains two of the exhibition’s six fascinating themed areas. Four more ‘time capsules’ provide authentic glimpses into the years 1919, 1923, 1929 and 1932 using short films. They also whet your appetite for delving further into these areas along the sides of the room, where posters, flags, historical equipment and other items are on display. Like everything else in the museum, these displays are explained in two languages, German and English, and illustrated with black-and-white photographs from the period. A total of more than 20 tactile and audio stations enable visitors to explore the time of the Weimar Republic in more depth. I find the special interest themes, such as the revolutionary impact of the invention of the radio and its effects on society, particularly enlightening.

A huge illuminated timeline in the centre of the room helps me to get my historical bearings. This table display runs along the length of the room, putting the major events of the period in focus and illustrating them with pictures. Unlike most exhibitions, this one is designed to stop you moving through it in a circle. I start in the centre – at the timeline – then move outwards past a media column (time capsule) to the side of the room, and then return to the centre to start again, in a sort of star-pattern. I keep stopping to immerse myself time and again, as the exhibition space contains just so many unexpected revelations waiting to be explored.

A feeling of freedom

I am so fascinated by the many different aspects the exhibition covers that I don’t realise how long I’ve been here. In the blink of an eye, two hours have passed, and it’s time for a quick break in the museum café. I hadn’t previously noticed the little artists’ garden behind it – a real insider’s tip! It’s slightly hidden, with a small stage, and makes for a wonderful haven in the heart of Weimar. As I’m sitting and relaxing in the café while looking out at Theaterplatz square through the large windows, I begin to reflect on how many major achievements and important aspects of modern life have their origins in the Weimar Republic. They symbolise the courage to make a fresh start, and the desire to bring about a new, democratic world. Votes for women, freedom of speech, freedom of assembly and freedom of religion, the introduction of unemployment insurance and the eight-hour working day are just a few examples of what we owe to it. Even the black, red and gold of the German national flag as the symbol of the new nation received a mention in what was then one of the most modern constitutions in the world. Much of the content of the 1919 constitution later became the foundation of the today’s German Basic Law. The Weimar Republic laid the groundwork for a democratic Germany. I am overcome by a feeling of freedom and gratitude for these hard-won freedoms, which many countries, and therefore many of my friends around the world, still cannot take for granted.