Gems of Jewish culture in Erfurt

Expeditions into Jewish life in a city

If you are looking for that one moment in time that brings the 900 years of Jewish life in Erfurt into sharp focus, almost like a magnifying glass, it would be that day in 1998 when a construction worker pulled a piece of metal out of the ground at the construction site on Michaelisstraße. The Erfurt man believed it to be an old pewter plate. He was mistaken. The item he was holding was not made of pewter, but silver. And it was just the beginning.

Hidden below, beneath the wall of a cellar entrance, lay a hoard of medieval silver coins and over 700 pieces of jewelry, many of them unique. The Erfurt Treasure wasn’t the only exciting find in those times. Only a few years earlier, the Old Synagogue had been rediscovered. Restoration of the medieval building was underway. Both discoveries provided key puzzle pieces for the reconstruction of Erfurt’s substantial Jewish heritage. Perhaps the most precious asset for the Jews living in or visiting Erfurt today, the discoveries are proof of the continuance of Jewish culture in Thuringia over many centuries – despite  catastrophic disruptions. This State of Thuringia celebrates this continuance in the anniversary year 2021 with events in numerous cities and communities. 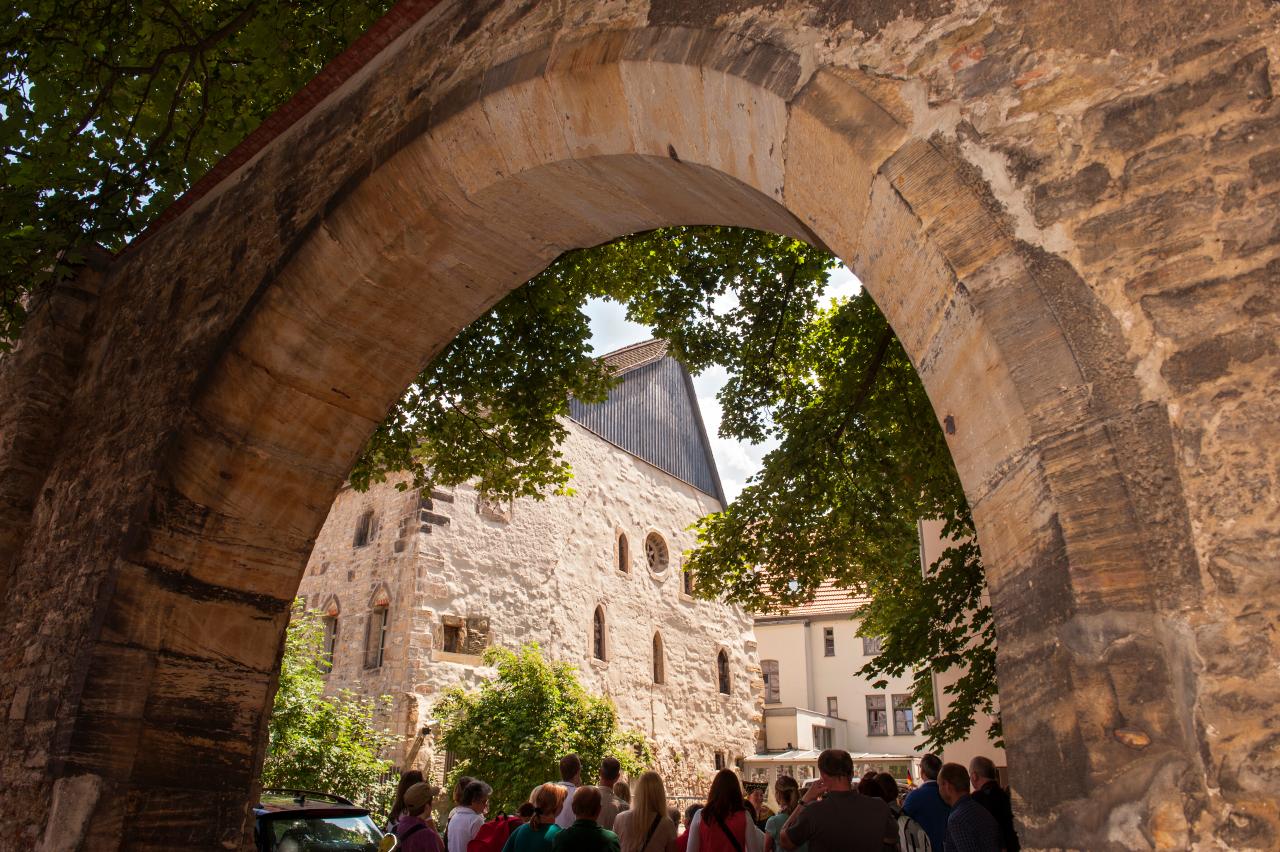 View to the Old Synagogue in Erfurt ©Martin Kirchner, Thuringia Tourism Board

A kehilla with mikveh, synagogue and cemetery

Erfurt has always been the center of Jewish life in Thuringia. In the Middle Ages, the city was one of the largest in the Holy Roman Empire, an economic and cultural hub at the crossroads of key trade routes. The first Jewish community in Erfurt was established in the late 11th century. Historical records describe this community as kehilla, a Jewish community with a synagogue, cemetery and a mikveh. Then the plague swept across Europe and Jews were accused of poisoning the wells. In Erfurt as elsewhere, Jews feared the worst. Faced with persecution, they hid and buried their valuables. One of them was Kalman von Wiehe, a banker in Erfurt. He was probably the original owner of the treasure found in 1998, almost 650 years after the massacre of 1349 and half a millennium after the Erfurt city council banned Jews from the city.

And what a treasure it is! With a weight of 29.5 kilograms – most of it due to the 3,141 silver coins and 14 silver ingots of varying sizes – the Erfurt treasure is hefty indeed. It also comprises over 700 individual works of Gothic goldsmithery. Some of these are most exquisitely made, including the unique gold wedding ring dating from the early 14th century. Did you know? According to historians, the Gothic period was an age of jewelry lovers. Looking at the artful rings and brooches, you get an idea of what that really means. Women and men alike adorned themselves with these and often wore more than one piece of jewelry. Kalman’s treasure is today on display in the Old Synagogue. With the nearby Small Synagogue meeting place and the New Synagogue on Max-Cars-Platz, the Old Synagogue forms the heart of Jewish Erfurt. Throughout the past few centuries, this medieval synagogue served, first, as a warehouse, then as a restaurant and cafe with a ballroom and bowling alley. Unrecognized during the Nazi era, the Old Synagogue escaped destruction. 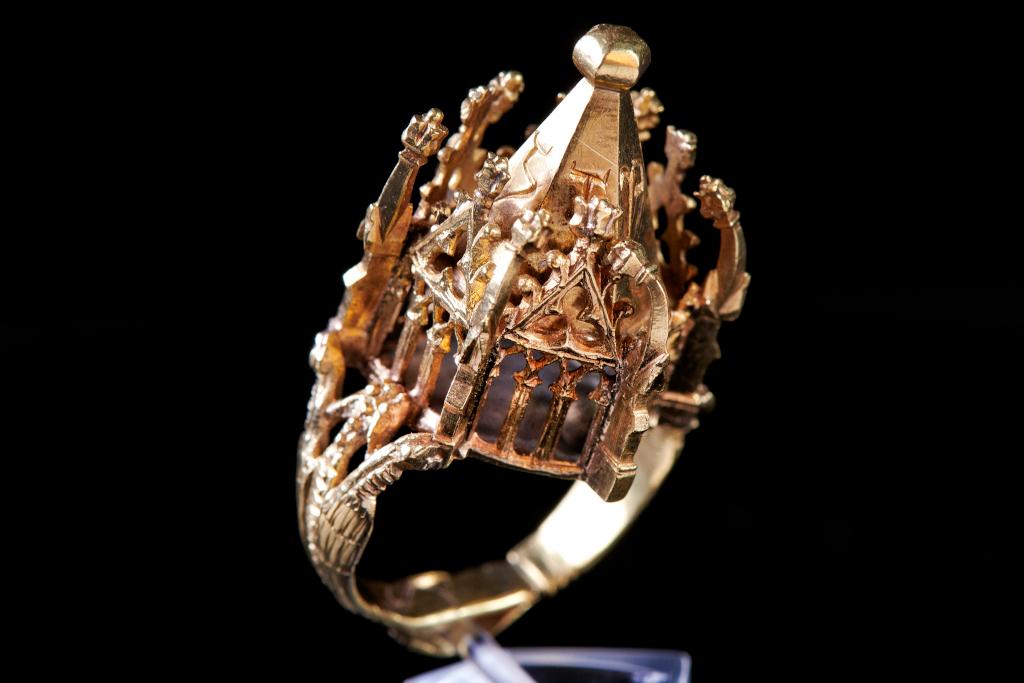 The Hebrew inscription “mazal tov” and the miniature building gracing this wedding ring suggest that the original owner was Jewish. With only three medieval rings of this kind remaining worldwide, it is the most important piece of the Erfurt Treasure. According to Jewish tradition, the wedding ring is made of nothing but pure gold and was worn only during the wedding ceremony. Almost five centimeters high, the Erfurt ring shows two joined hands as a symbol of marital fidelity. The precious gem also holds a charming little secret:  whenever you move it, you hear the chime of a small gold ball rolling around inside.

The Old Synagogue: museum and exhibit

It wasn’t until the 1990s that the original character of the Old Synagogue was rediscovered. The best-preserved synagogue in Central Europe with parts dating back to around 1100, the Old Synagogue, like the Erfurt Treasure, was found by accident. It is now both a museum and a historic site.

Jews have lived in Erfurt for a very long time, and archeologists keep discovering new evidence of medieval Jewish culture. The mikveh on the banks of the river Gera, right next to the Krämerbrücke, was discovered only recently, in 2007. Records of its existence had been found long before – documents from 13th century show that the Jewish community had to pay taxes for the mikveh – but nobody knew where exactly in the old town the ceremonial bath had been.

Besides the synagogue and cemetery, the mikveh is central to Jewish communities. The basin of the medieval bath in Erfurt, unused for many centuries, can be seen from the outside through a window in the ceiling of the protective construction covering the historic site. The interior of the mikveh can be visited only on guided tours. As you stand in the anteroom and look down on the immersion basin, you feel immersed in Erfurt's history. A city that reveals its secrets bit by bit, often aided by chance.

With its wealth of medieval Jewish sites, Erfurt will be applying to be included in the list of UNESCO
World Heritage Sites. more here