Garden design on the river Ilm

“Paths are silent guides,” says Andreas Pahl, quoting the great landscape gardener Prince Pückler and points to a romantic, moss-covered stone structure flanked by a curved bridge – a picture-perfect ruin. The spruce trees nearby were by no means coincidental either. Weimar’s green spaces are admirable!

The latest trends often come from England and that was true even in the early 19th century. Starting in 1811, at a time when the English style of landscaped park was immensely popular in Germany, Duke Carl Friedrich of Saxe-Weimar-Eisenach had the baroque gardens around Belvedere Palace, his summer residence, completely remodelled little by little. Gone were the geometric flower beds, pruned hedges, and avenues laid out in radial formations. Instead, he embraced the British style of wide-open spaces and a more natural look with meadows, and with sculptures and other decorative features romantically scattered around the grounds. When you stroll through Belvedere Palace park today, which is connected to Weimar’s old quarter via a four-kilometre-long, dead-straight avenue, you hardly notice the point at which the park stops and nature begins. The transitions are fluid. There is the smell of hay, sheep are grazing on the flower meadows, and the pathways wind their way playfully under chestnut trees, linden trees and larches.

“Paths are silent guides,” says Andreas Pahl, quoting the great landscape gardener Prince Pückler. “Look here: the path takes us first to the copper beech, then to the weeping beech, then on to the fountain, before the view of the large grotto opens out in front of us.” He points to a romantic, moss-covered stone structure flanked by a curved bridge – a picture-perfect ruin. The spruce trees nearby were by no means coincidental either, as Pahl explains, but were supposed to add to the brooding atmosphere.

He is a horticultural consultant at the Klassik Stiftung Weimar foundation, to which Belvedere Palace belongs. And he knows a great deal about the extensive palace park. “Fifteen kilometres of pathways run through the park,” he says. “You might think that you are randomly strolling through the countryside, but everything here follows an unseen script. The next ornamental feature is always just around the corner. The rose berceau or the Borkenhäuschen. All of the little gems that walkers come across are very precisely planned.” 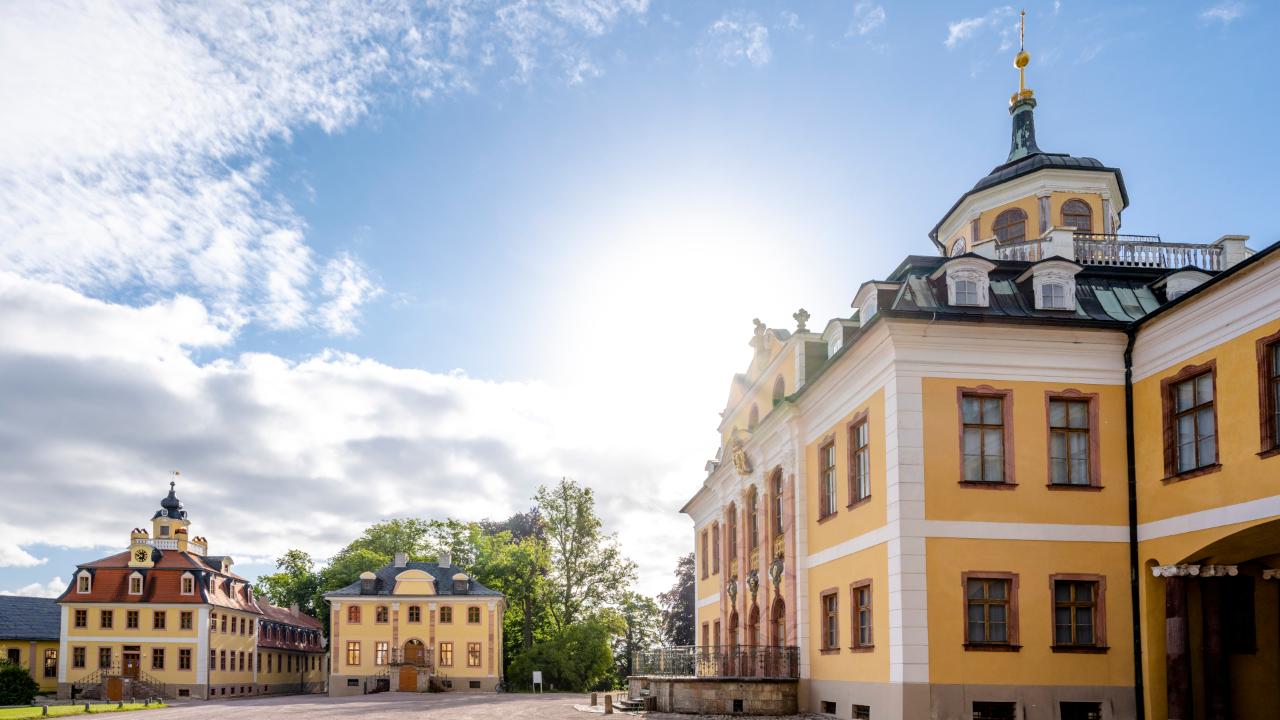 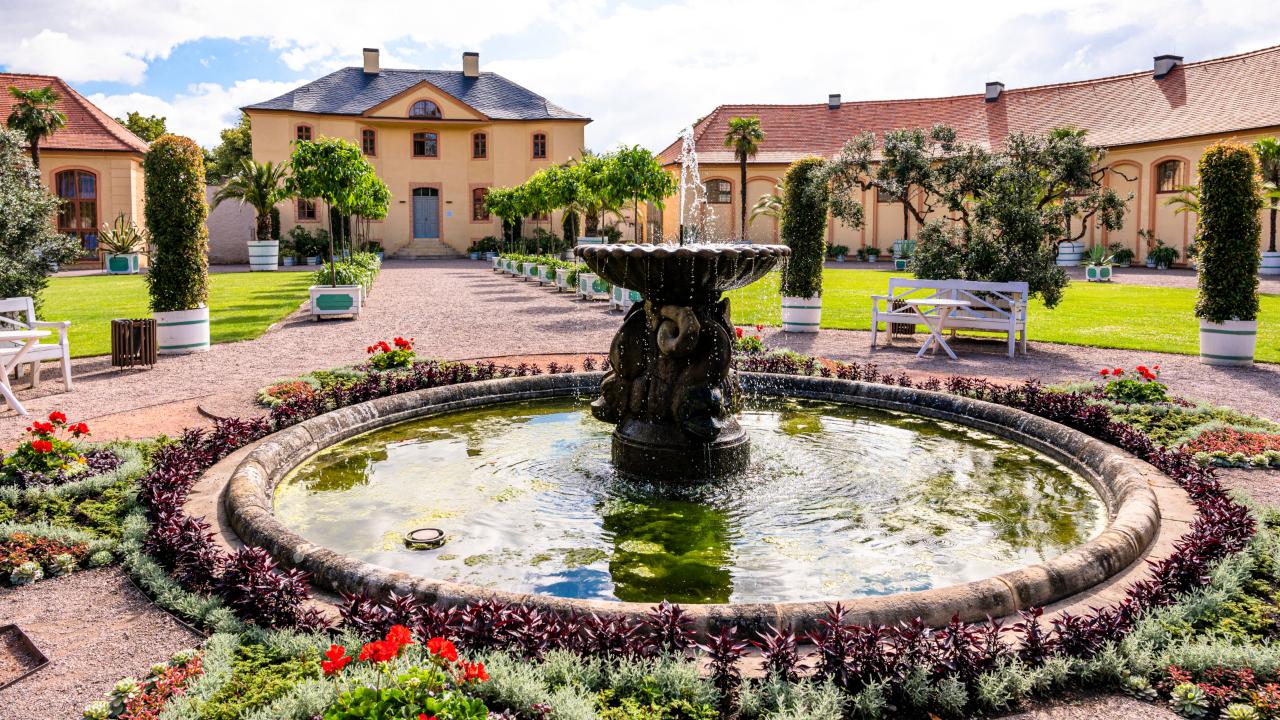 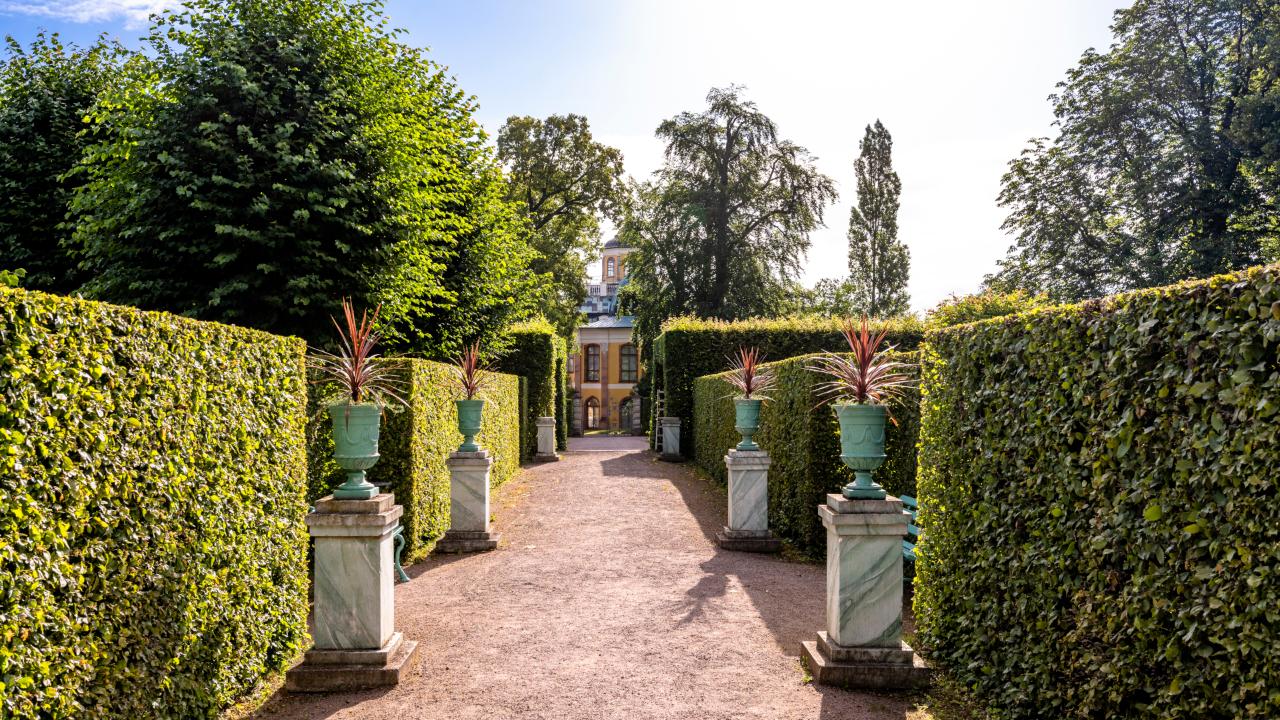 All very English you might think? Not quite! Duke Carl Friedrich had the Russian Garden at the palace set out more formally in the baroque style with a cupid garden and 200-year-old hornbeam trees forming dark arbours, under which the promenading ladies with their fair complexions would have been well shaded from the sun. It also features a linden garden and a symmetrical arrangement of statues depicting the seasons. The garden is an exact replica of a garden in St. Petersburg. It was created for Carl Friedrich’s wife, the Grand Duchess Maria Pavlovna of Russia, to make the move to the town more agreeable and to help her overcome her homesickness. With success, it seems. “The illusion is almost perfect,” says guide Andreas Pahl with a smile, quoting a letter from the Duchess to her mother in Russia. 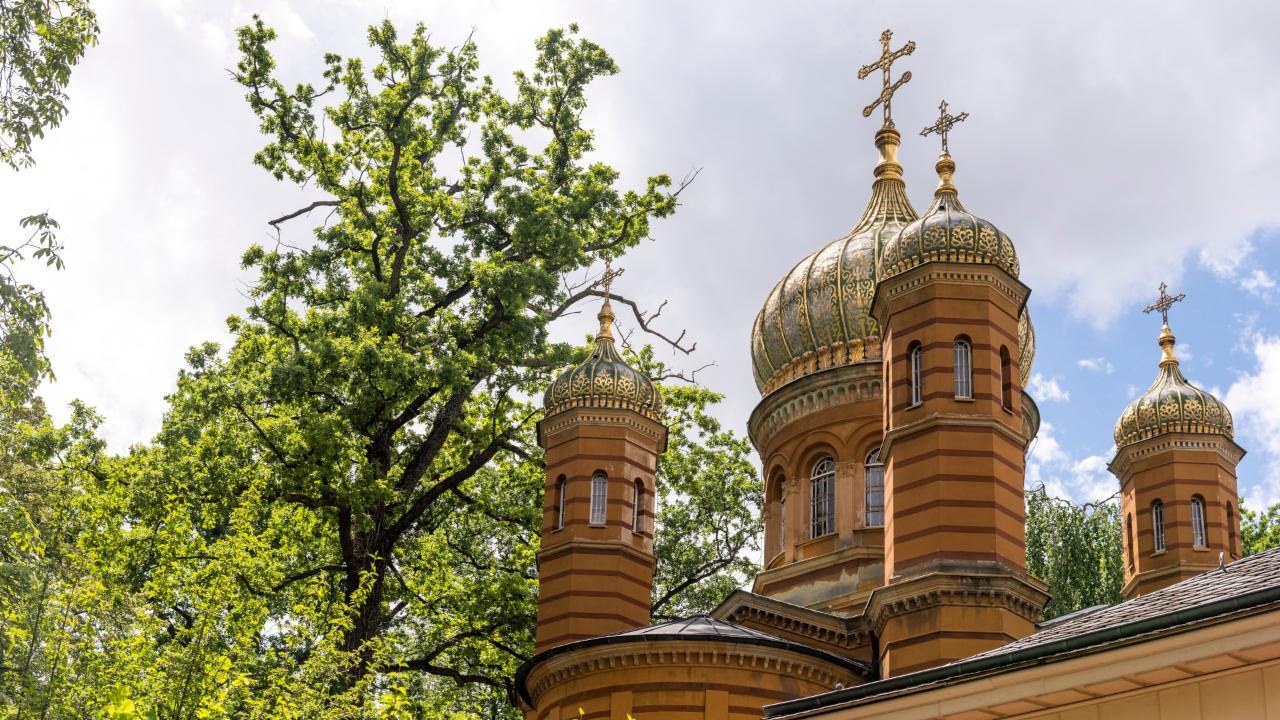 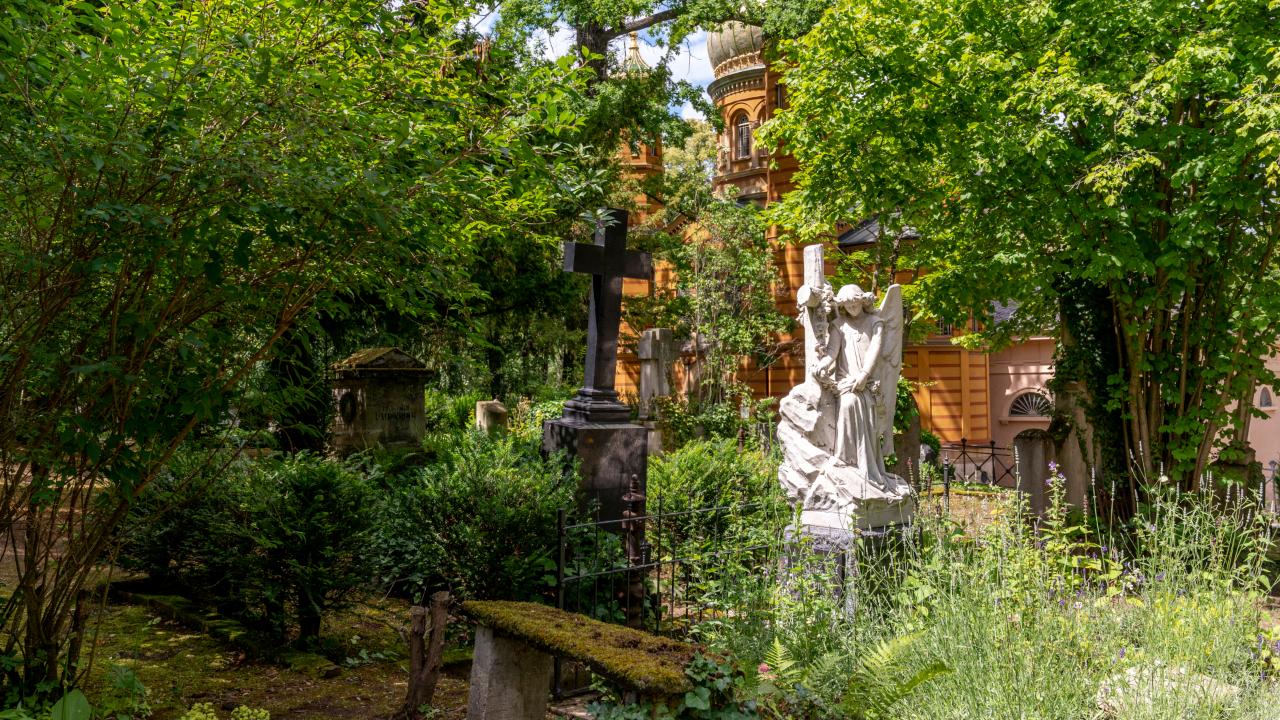 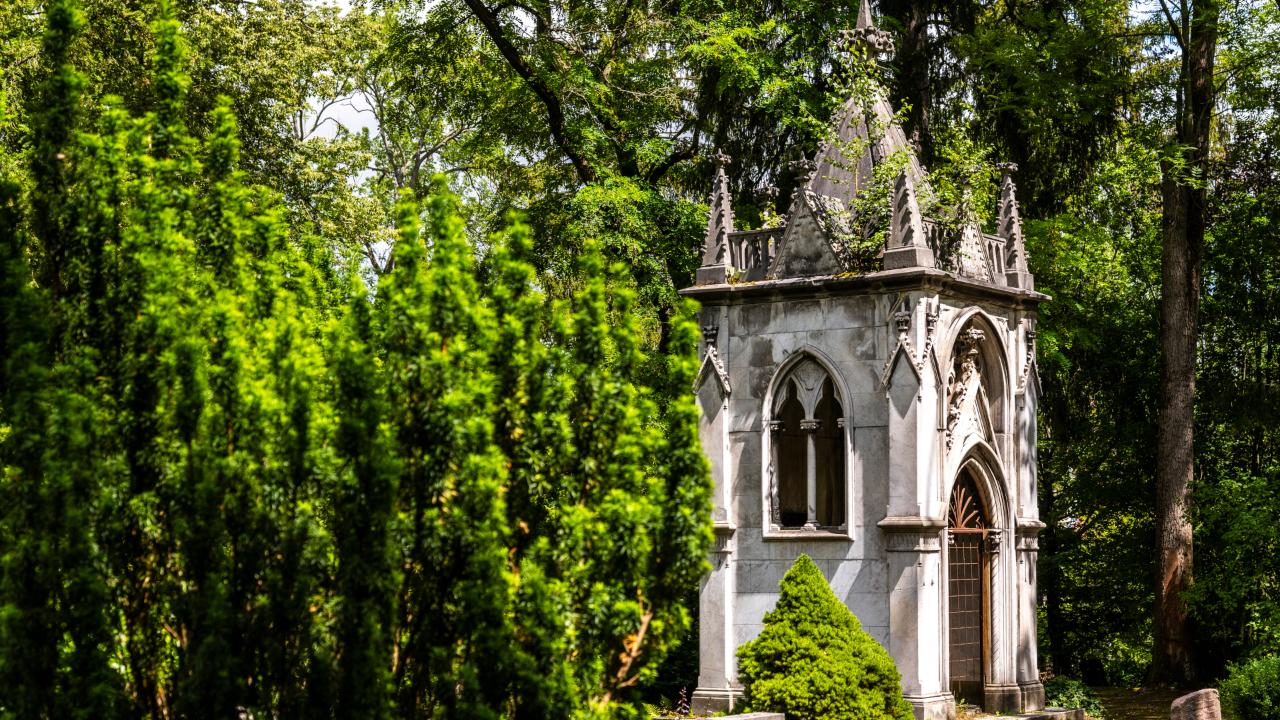 Parks, gardens and cemeteries with historical significance, Thuringia offers them in many facets of garden design. Six of them are located in and around Weimar. One such site is the historical cemetery, an exceptionally atmospheric place, where you can walk between the moss-covered gravestones. Goethe’s family was laid to rest here, as was his trusted friend Johann Peter Eckermann. Goethe himself is buried next to his fellow poet Johann Friedrich von Schiller in the ducal crypt, which is located in the middle of the cemetery.

The idyllic Kirms-Krackow Garden opposite Weimar City Castle is a vibrant place, full of life. It is a prime example of an 18th-century Biedermeier garden, of which there are very few in Germany today. “Biedermeier gardens were small and symmetrically arranged walled gardens,” explains our guide Steffen Meyer. “The idea was that people should be able to step out of the house and into the garden to take a short walk and get some fresh air.” 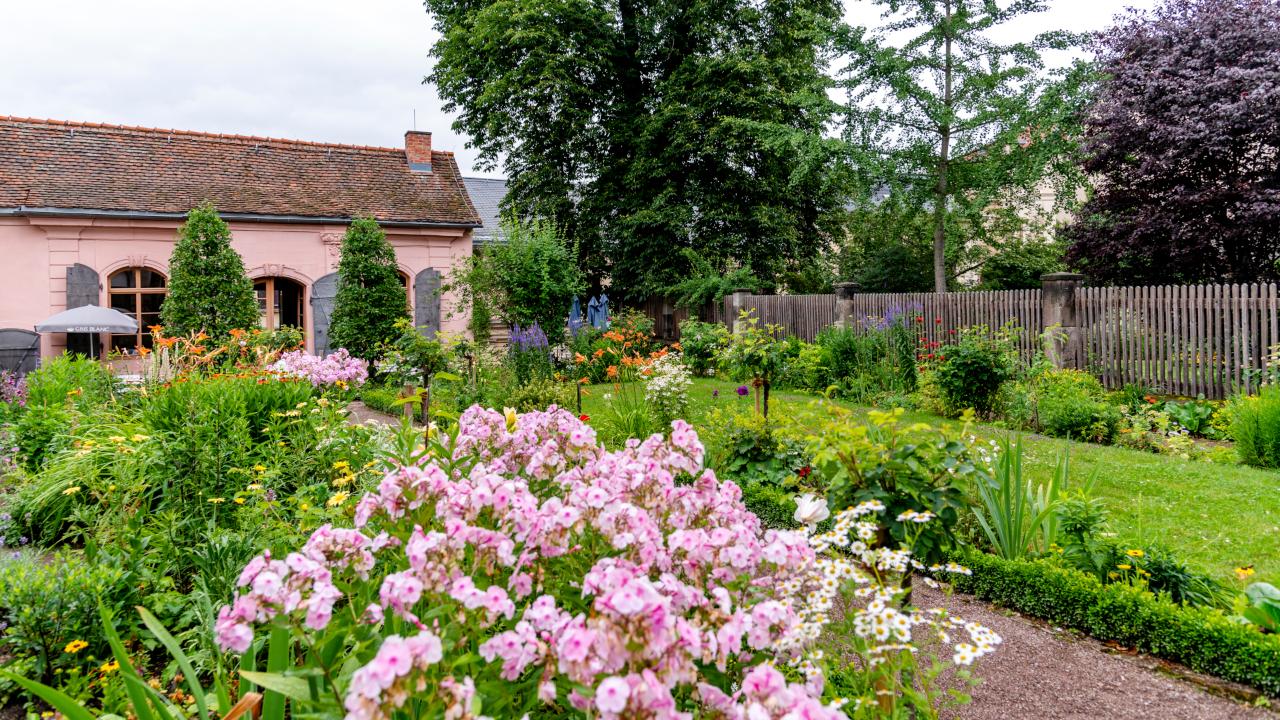 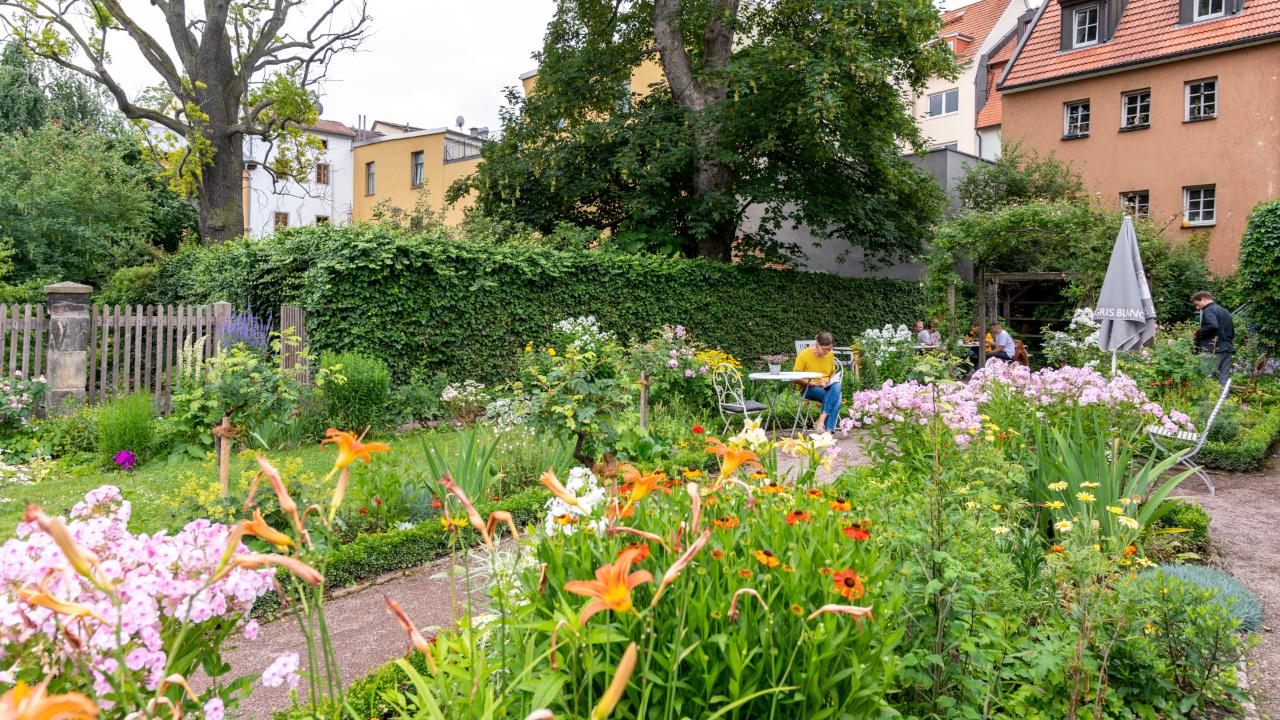 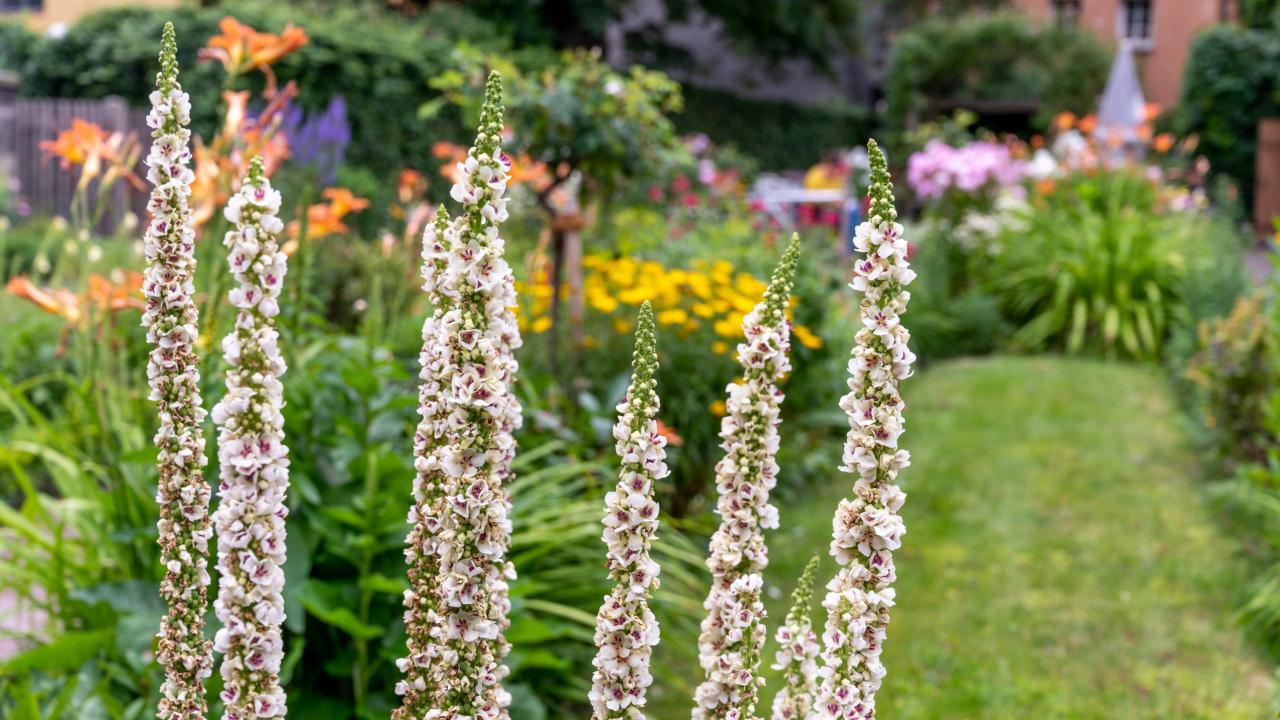 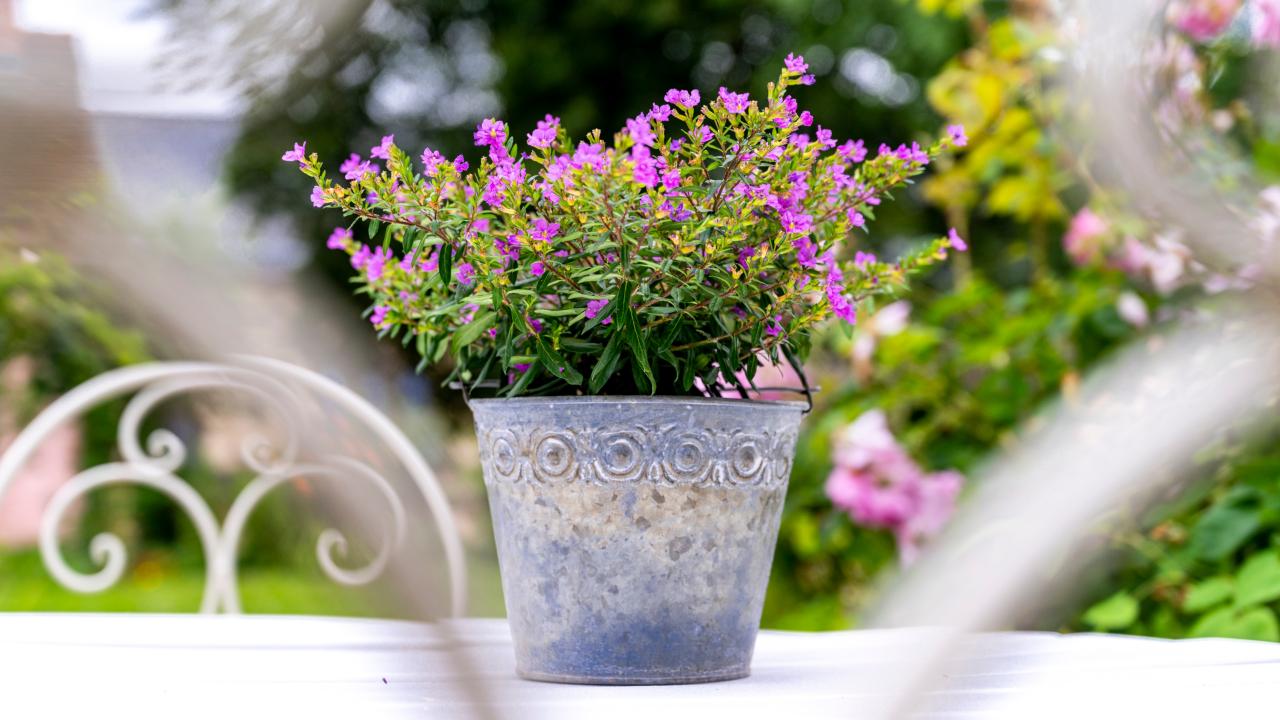 Today, you can still stroll through Kirms-Krackow Garden on narrow gravel paths between espalier fruit trees and flower beds filled with auriculas, phlox and hollyhocks, framed by box trees. Franz Kirms, who created the garden, had a love of flowers and an interest in the cultivation of plants. He earned a living as the finance director at the royal theatre in Weimar. “Schiller came here to settle his fees, Iffland invited himself for dinner, and Hans-Christian Andersen stayed at the house when he was passing through the town,” says guide Steffen Meyer in a manner so descriptive that he almost brings the era of Weimar Classicism to life. It’s wonderful to think that the cultural greats from Weimar sat with Kirms in his garden pavilion and played cards. “Yes, that’s exactly how it was!” says Steffen Meyer, laughing. 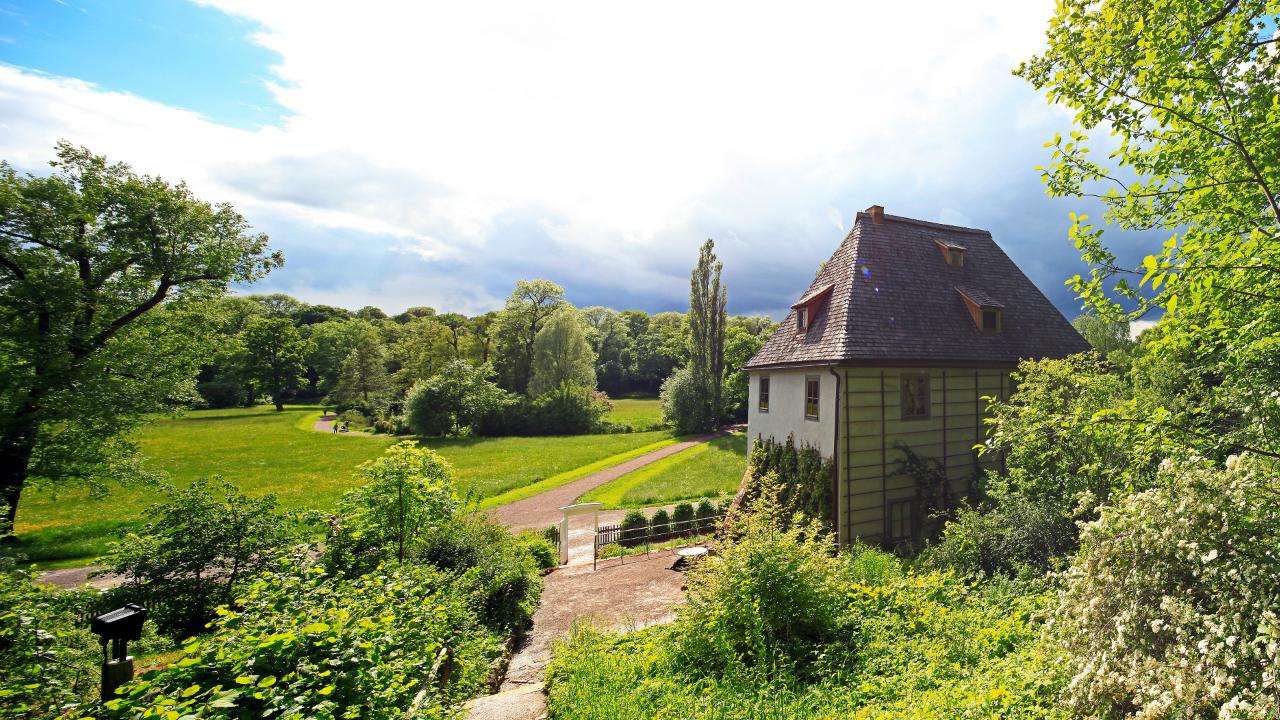 And, while we are on the subject of Weimar classicism: in the extensive Park on the River Ilm, a park designed in the English style, a real highlight is the ‘Garten am Stern’ created by Goethe.

The poet retreated to his hillside property called Goethe Garden House when he needed peace and quiet away from the hustle and bustle of the town. He called his creation ‘Gärtgen vorm Thore’ and planted it himself – with a ‘Malvenallee (an avenue of mallows), an area of park resembling an English landscape garden, an orchard, and beds for planting strawberries and asparagus, which, in practice, was largely taken care of by his wife Christiane. Goethe himself preferred to take a more intellectual approach to the subject of vegetable cultivation.

He also entrusted the key to the house and garden to his close confidante Charlotte von Stein. He had a love poem engraved in stone at her favourite spot, which was on a slight elevation with views of the countryside.