From the baroque to Japan

Thuringia’s parks and gardens could not be more varied, ranging from Far East bonsai culture to the scent of over 450 types of rose and a 160-hectare royal country park. On this voyage of discovery I look at ornamental flower beds, marvel at landscape architecture and enjoy a balmy summer breeze amid flowering vines.

Relaxing with tea and roses

The aroma of freshly brewed tea drifts across from the Japanese tea ceremony as koi carp swim beneath the sparkling surface of the water – am I really still in Thuringia? I certainly am. This is the rose town and spa resort of Bad Langensalza. It boasts a total of ten themed parks and gardens where you can relax and recharge.

The Japanese Garden aims to spread happiness among its visitors, as indicated by its name, ‘kofuku no niwa’, which means ‘the garden of bliss’. The layout represents the different landscapes of the Japanese islands. I start by walking across a pond along a zigzagging walkway. Its shape is supposed to help throw evil spirits off my track, which would certainly be a useful first step towards a state of bliss!

The calming effect of water is evident throughout the park. A waterfall burbles peacefully as it flows into a pond and then seems to continue its path across the rock garden, where wave-like tracks are carefully raked into the gravel. I cross the gravel pond on large individual stones. 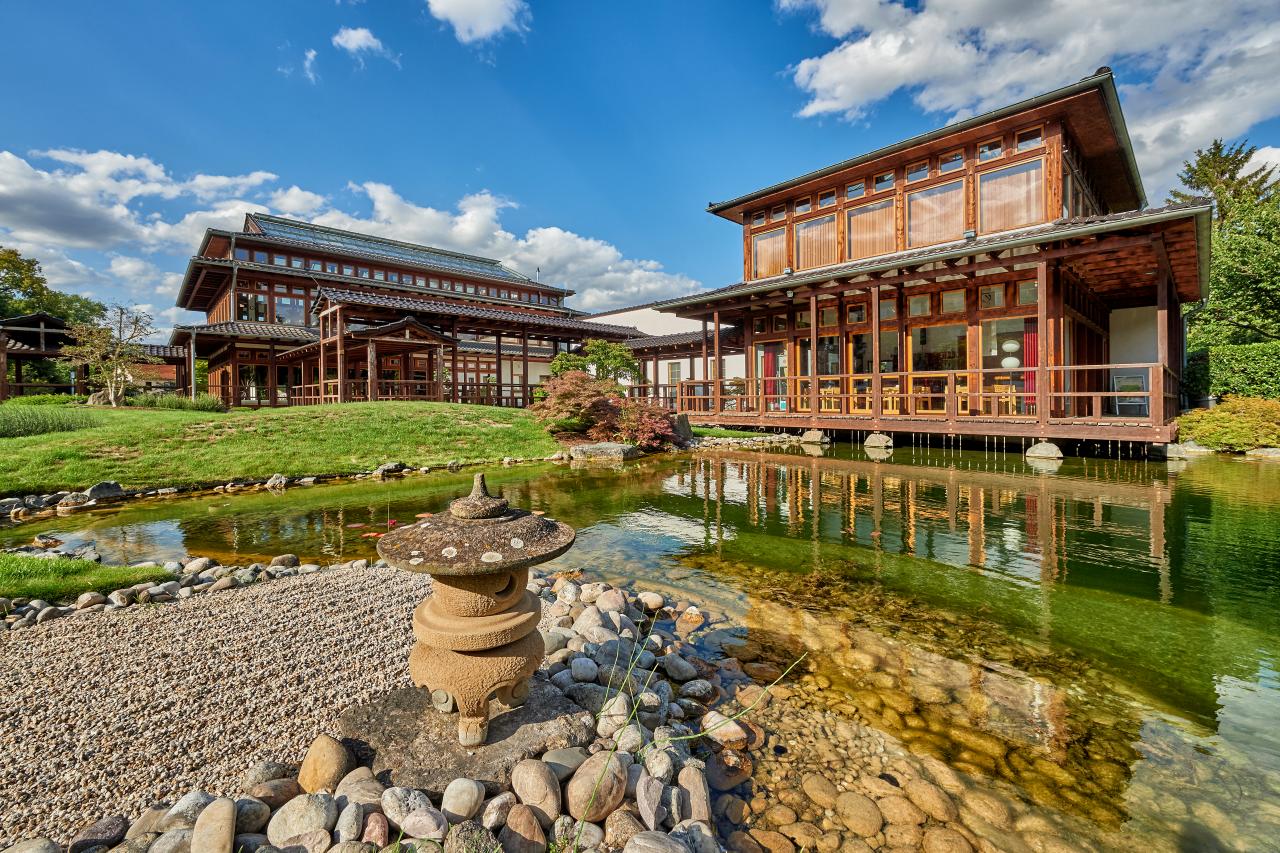 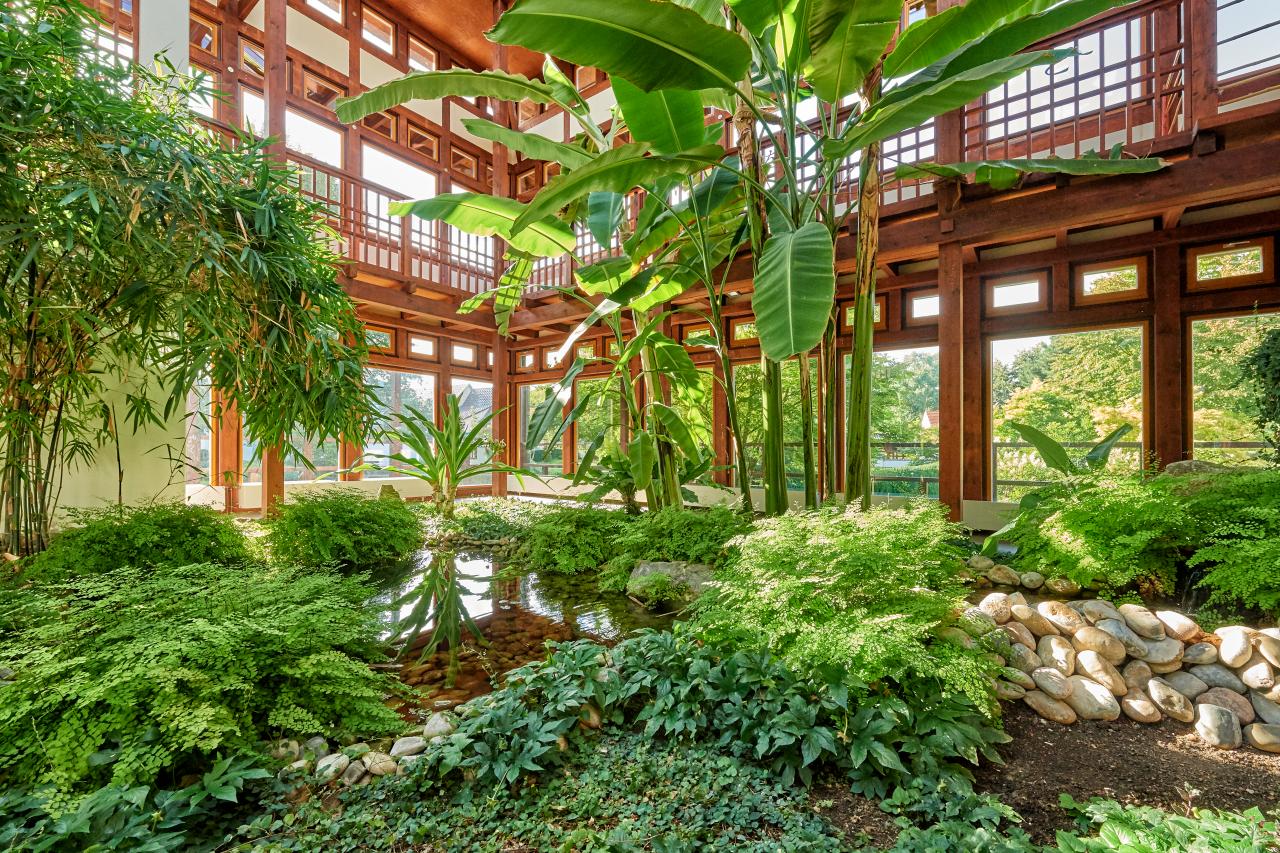 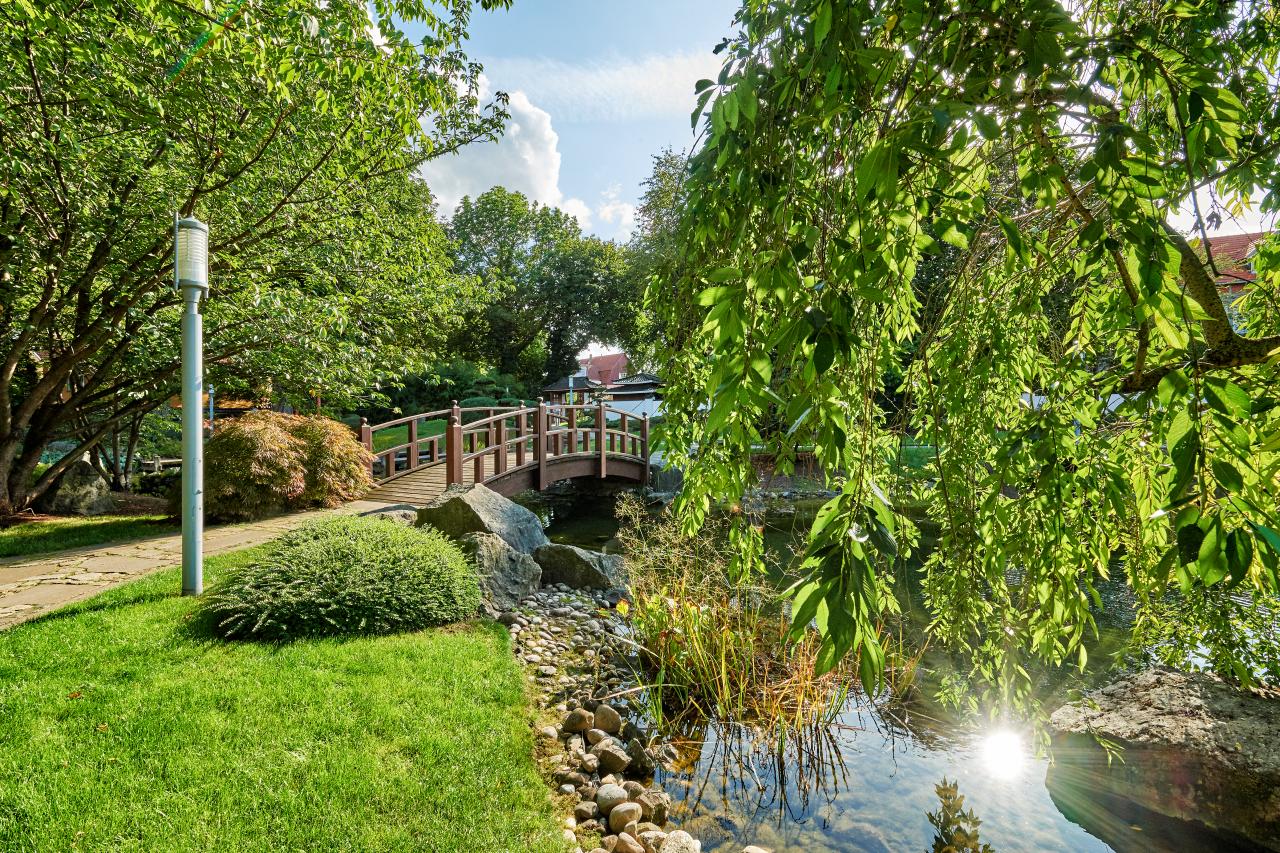 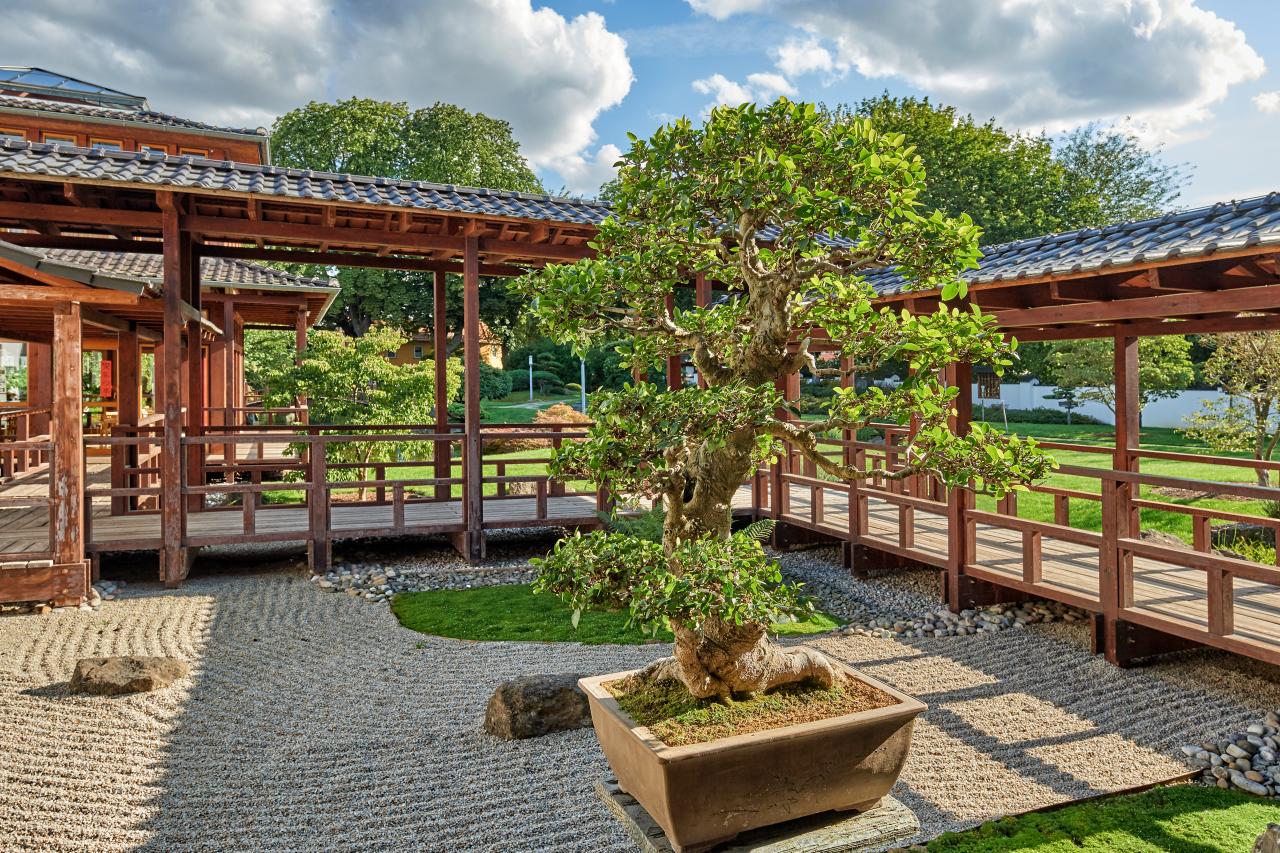 The gravel beds in the Japanese Garden are meticulously raked ©Florian Trykowski, TTG

A few minutes’ walk from this Japanese oasis I discover a magnificent sea of flowers – the Rose Garden, a riot of colours and floral fragrances created by more than 450 types of rose. Every single plant is neatly labelled with its name. I stroll through the rose-covered pergola, enjoying the shade and stopping for a chat with one of the gardeners. Long spells of warm temperatures take their toll on the plants and the roses require extra care at such times. Visitors should make sure to ‘scale’ the lookout hill, which offers superb panoramic views of the garden’s opulent floral displays. 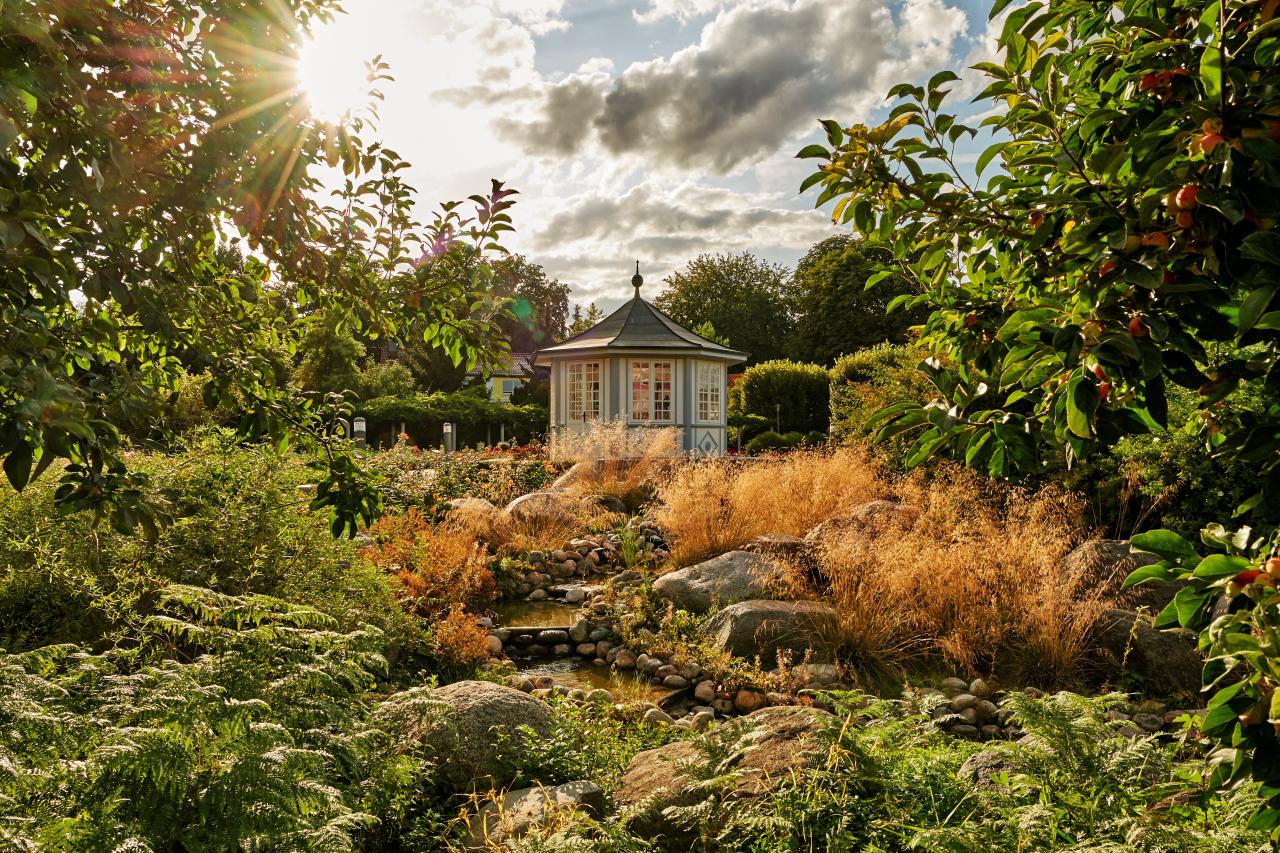 Next to the entrance to the Rose Garden is the Rose Museum, which showcases more than a century of rose breeding and rose growing history in Bad Langensalza. Anni Berger, one of the town’s most notable personalities, remains Germany’s only recognised female rose breeder. She was also chiefly responsible for establishing Bad Langensalza’s rose tradition.

A touch of English class

A real gem awaits me on the outskirts of Bad Liebenstein. It may be called ‘house’, but that description is somewhat misleading. Tucked away in the forest, Altenstein House and Park covers a total of 160 hectares. A look through the gate, set within a crescent of former offices and service buildings, reveals a stately home in all its splendour. I feel like Kate, the Duchess of Cambridge, visiting one of her idyllic country estates. 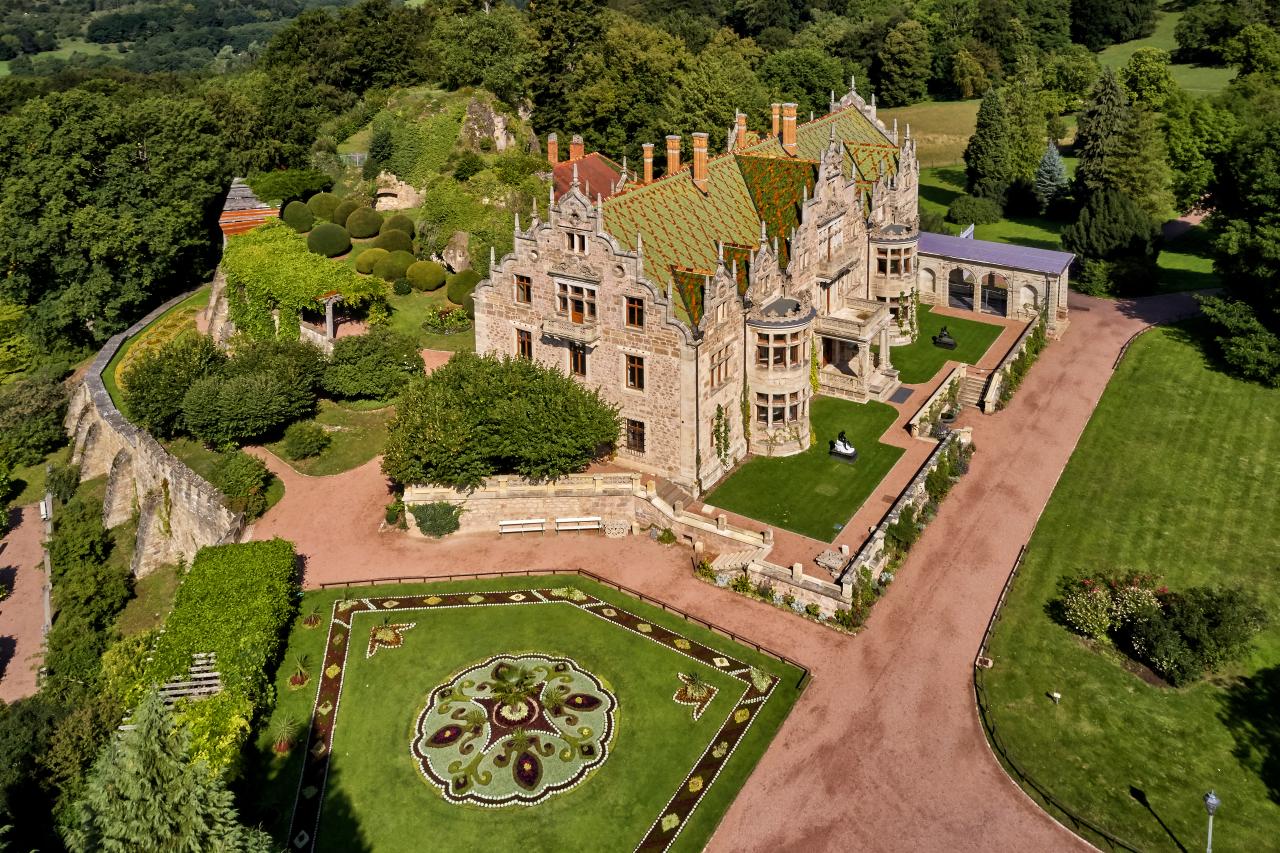 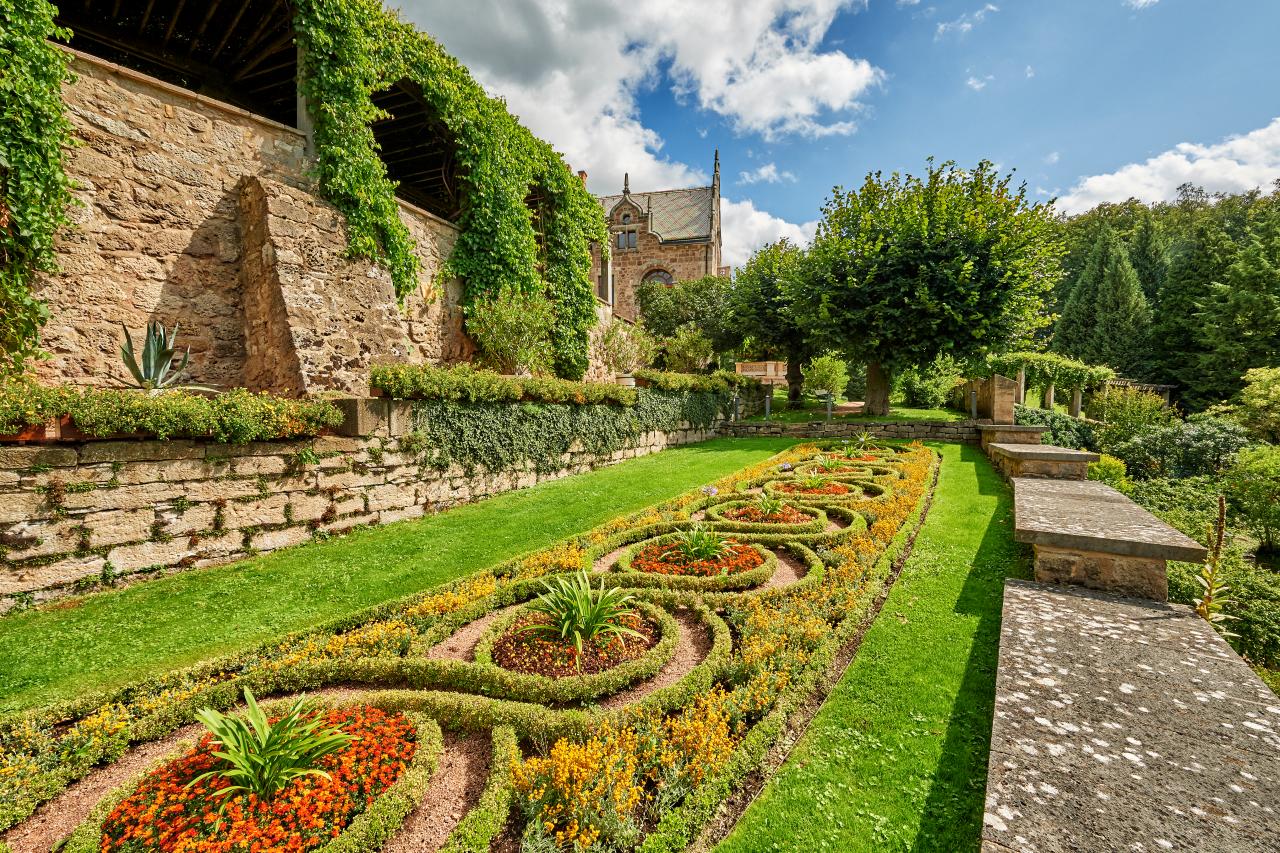 Even at second glance the building looks rather unusual for Germany – it was remodelled in the style of an English country house at the end of the 19th century . That means semi-circular oriels, arched windows, curved gables with obelisks, and tall chimneys on the roof, resulting in a striking appearance. To me it seems delightfully romantic, and I notice my thoughts drifting off … what I wouldn’t give to be a princess for a day!

The huge park with its varied design and hidden treasures is also a true delight. I learn that most of the woods on the estate are not due to random propagation – many of the trees were specifically planted to create a landscaped park that would seem as natural as possible. This unspoilt appearance is in direct contrast to the immaculately tended formal gardens around the mansion itself. My gaze is drawn to an impressive display of carpet bedding featuring succulents, and also to the knot garden. 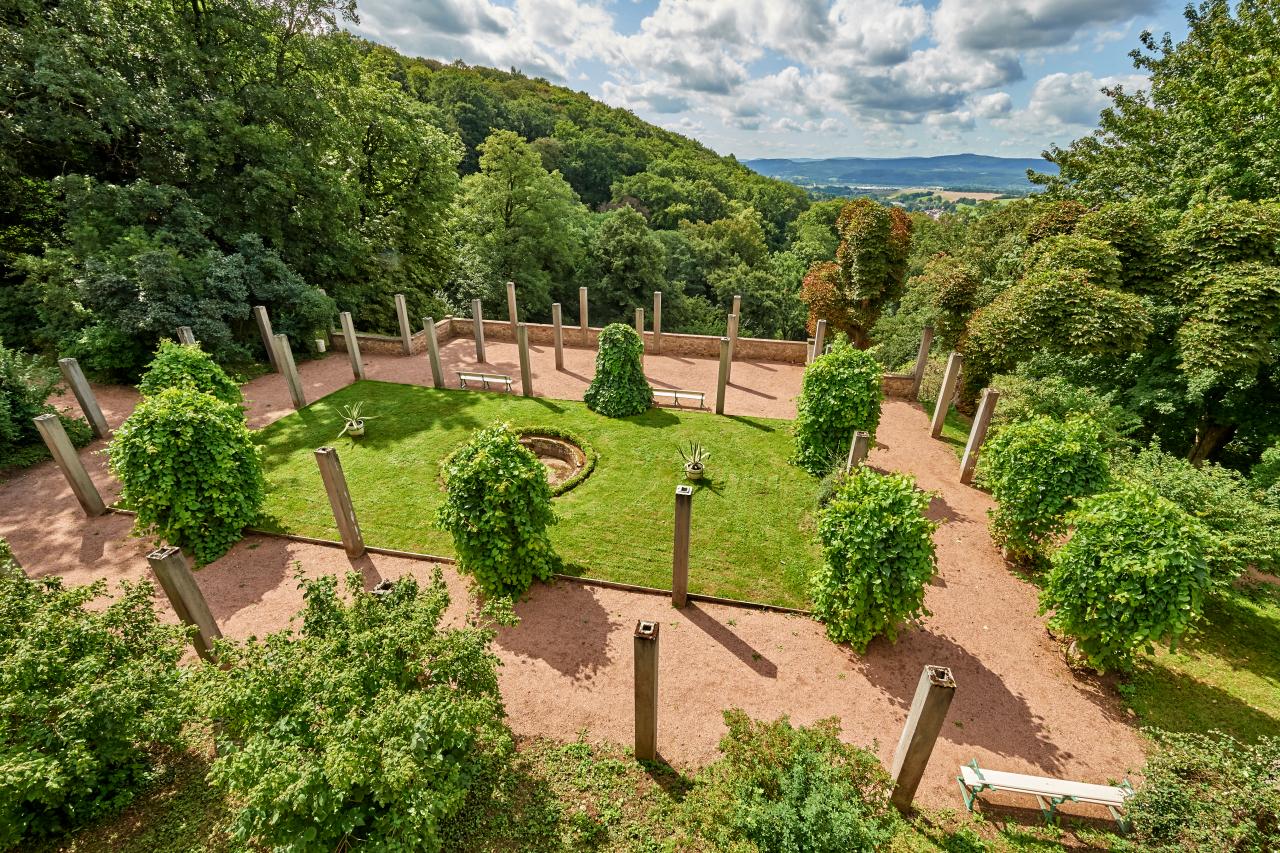 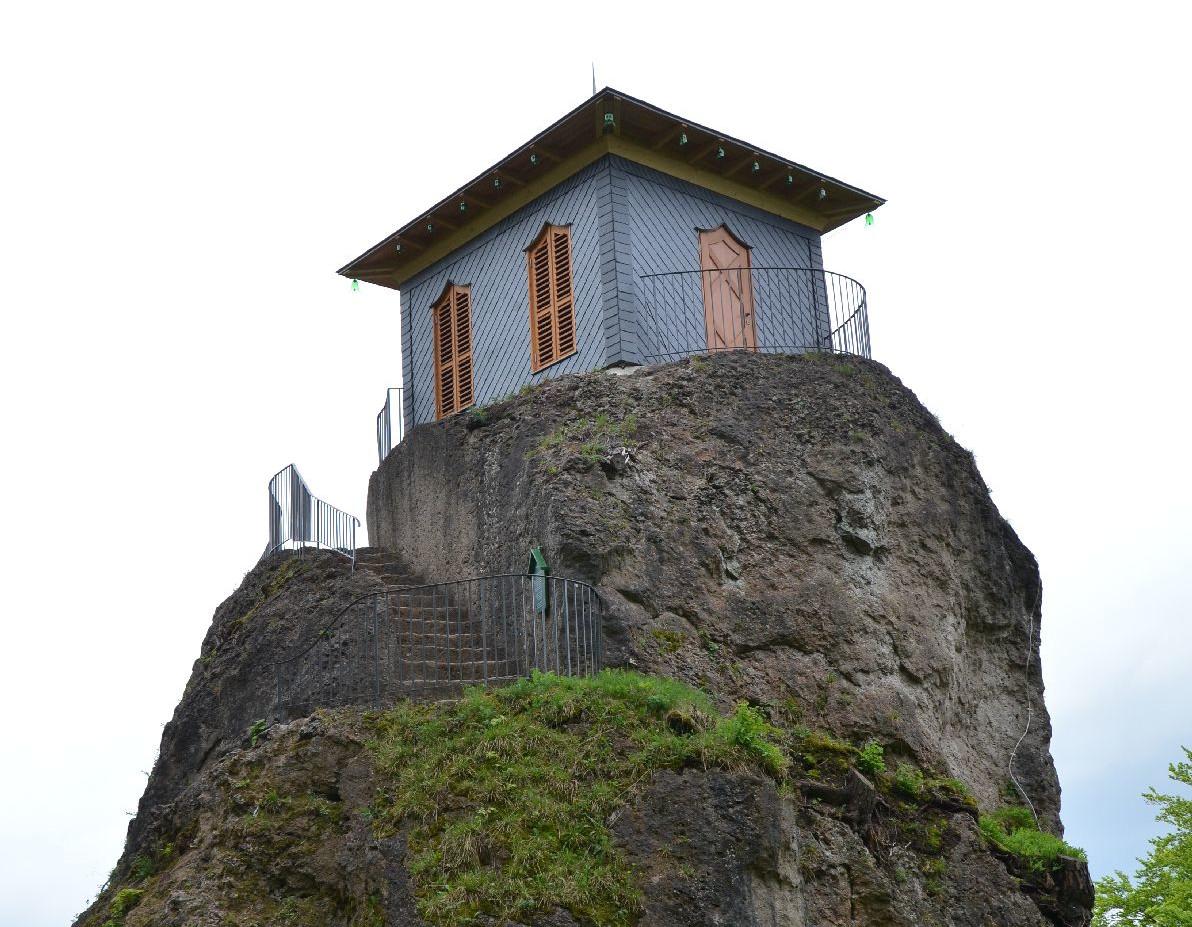 The terraced gardens and the densely covered pergolas are also very romantic and offer stunning panoramic views across the Werra valley.

Three circular trails invite visitors to explore the large park, featuring hidden architectural gems such as the Knights’ Chapel, the little Chinese teahouse and the ‘flower basket’. All three of these sites have been constructed on rocky crags in direct line of sight with each other – it’s quite something to behold.

Bad Langensalza has been a spa resort for more than 200 years. Its sulphur springs were discovered at the start of the 19th century, with thermal saltwater and mineral springs being opened in 1996. The various gardens were created to offer spa visitors and their guests additional options for recreation. The origins of the health resort of Bad Liebenstein date back even further. As long ago as 1601, people used to talk about Liebenstein’s miracle spring. Duke Kasimir of Coburg had the spring encased in a drinking fountain in 1610, which heralded the transformation of the town into a fashionable spa resort. One reason why Duke Georg I of Saxe-Meiningen built his summer residence at Altenstein was the rise of Liebenstein as a health spa based on its mineral springs. The renowned landscape gardeners Prince Hermann von Pückler and Peter Joseph Lenné were among those who provided input for the design of Altenstein Park.

The balcony of Thuringia

The Dornburg Palaces and Gardens form a particularly beautiful ensemble. Set high above the Saale valley, the three palaces from different architectural periods can been seen from far and wide. They are linked by the palace gardens.

My personal favourite is the panoramic vista across the Saale valley available from the clifftop. With the sun above me and birdsong in my ears I walk along the vines until I spot the little vineyard house. The Rococo Palace itself looks like something from a fairytale – I’m expecting Sleeping Beauty to step out of the gates of the ornate palace and stroll through the immaculate garden at any moment. The rose-covered pergola opposite provides welcome shade, its leaves rustling softly in the gentle breeze. Dornburg is famous for its roses. Much like Bad Langensalza, it boasts a wealth of historical and contemporary varieties.

Johann Wolfgang von Goethe was similarly impressed by these beautiful surroundings. He enjoyed both the view and the magnificent ornamental gardens with their amazing colours. 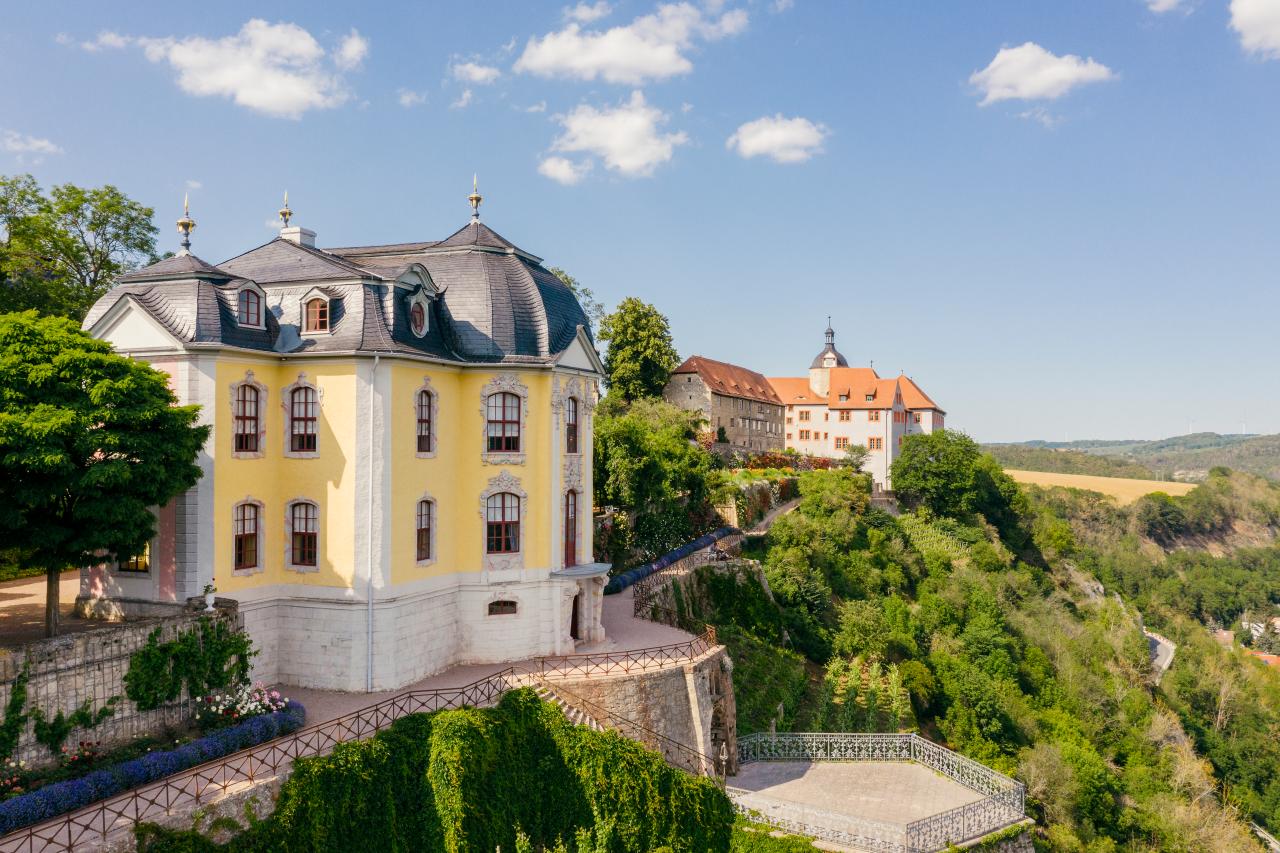 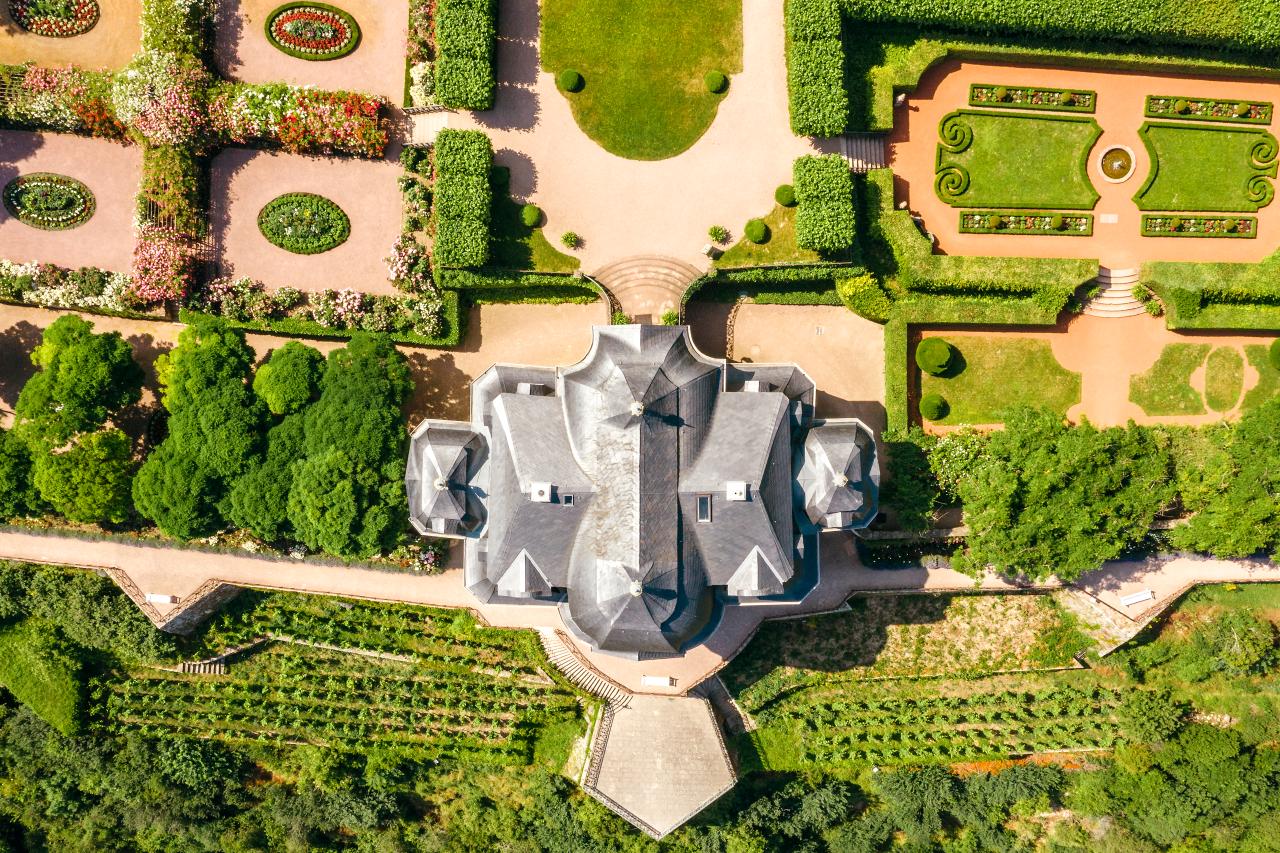 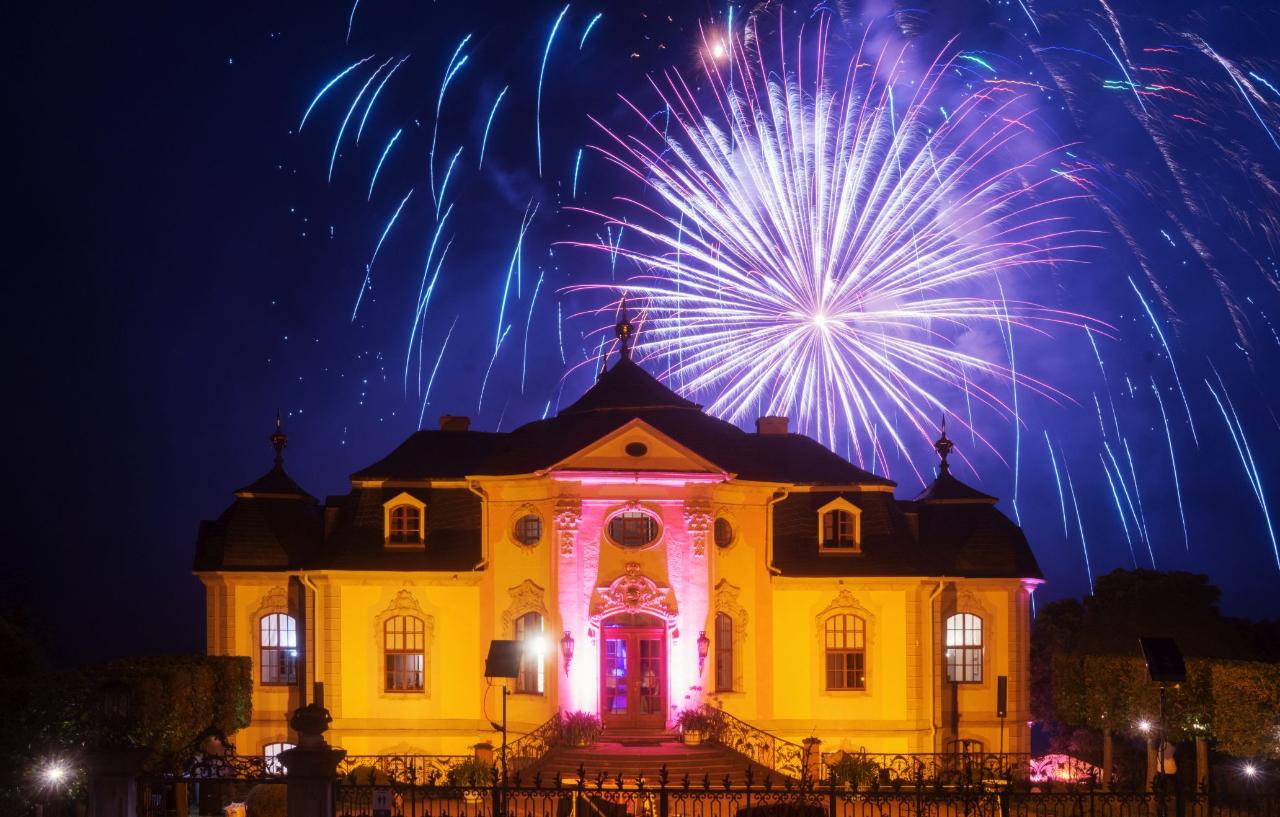 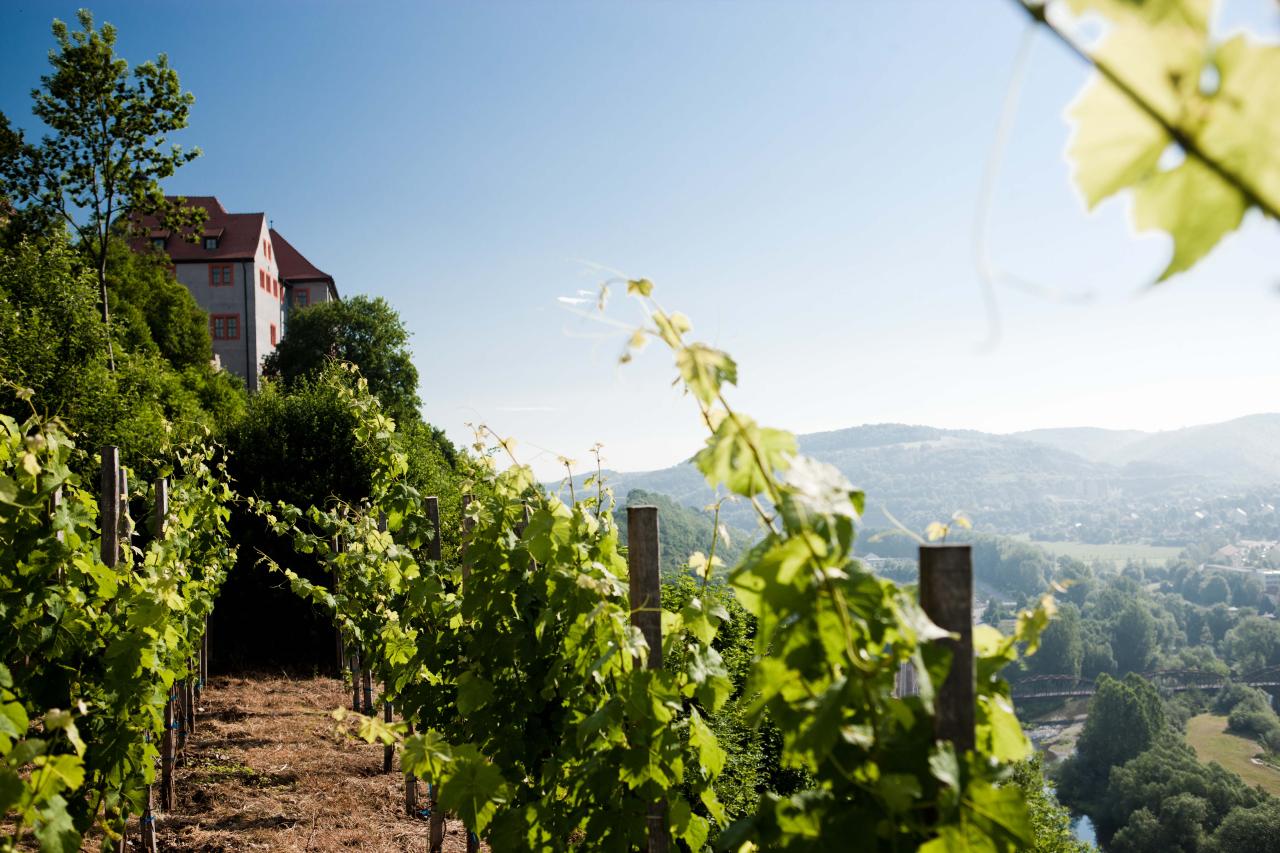 The Renaissance and Rococo palaces have been turned into museums, and tours are available. The rooms in which Goethe lived are located in the Renaissance Palace. The royal stables opposite the Rococo Palace house the Bauhaus Workshop Museum, with authentic tools and equipment from the Bauhaus period.