Between 1775 and 1788, Johann von Goethe frequently visited Kochberg Castle on foot, on horseback or – later on – in a carriage. The charming moated castle was built in around 1600 amid the foothills of the Thuringian Slate Mountains. Today, walkers can follow in the great poet’s footsteps on the Goethe Trail, which runs for almost 30 kilometres from Weimar via Schwarza to Kochberg Castle.

“My soul seeks you in Kochberg”

Visitors are drawn here to explore Goethe’s illustrious relationship, but above all by the magnificent, six-acre landscape park created by Charlotte von Stein’s eldest son, Carl, in the early part of the 19th century. Completed in around 1840, the park was rejuvenated in the 1970s. Carl’s creation was an idyllic haven of beauty. From the Liebhabertheater right next to the castle, which still stages plays to this day, paths wind their way beneath magnificent old trees to enchanted places, such as tower ruins, a walled grotto with a burial ground, and a bathing house and pond. The pond also feeds a rivulet that runs through the grounds and on to the jewel of the park: the Blumentheater flower display.

Goethe was a regular visitor here between 1775 and 1788. The manor with its castle and park is almost completely intact, and you can take a 360° virtual tour of the grounds on the Klassik Stiftung Weimar website.
Find out more 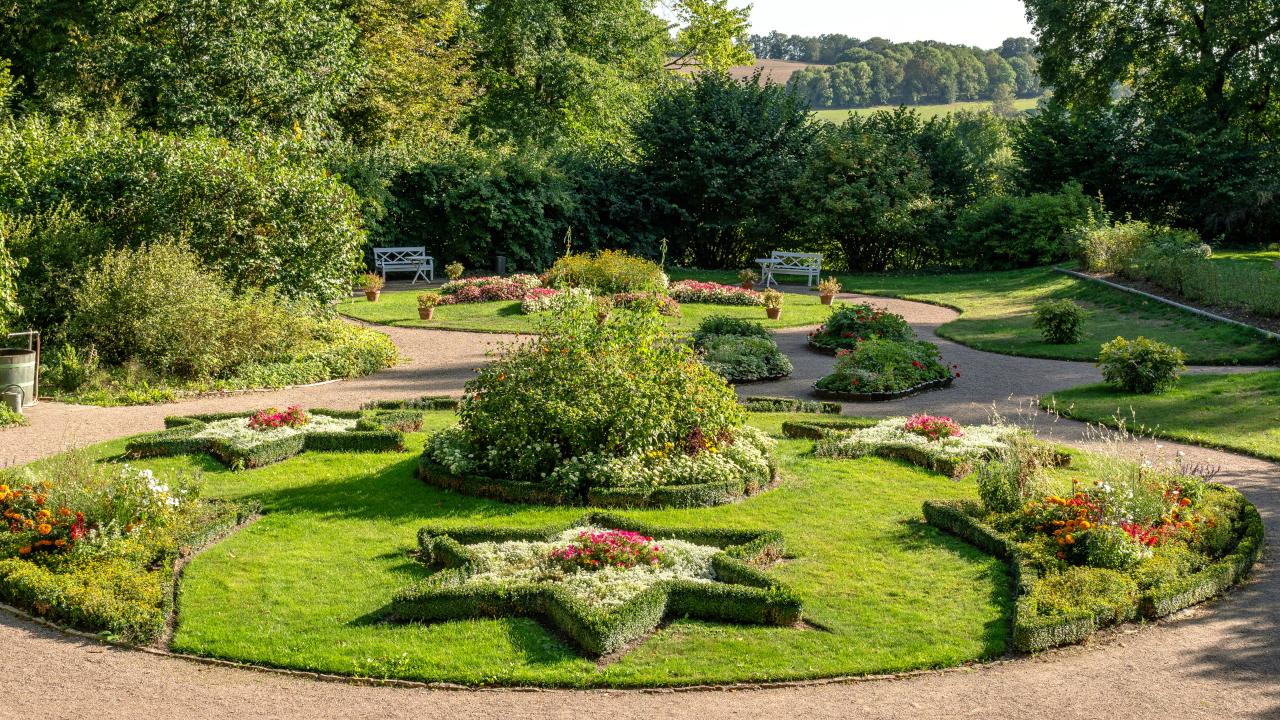 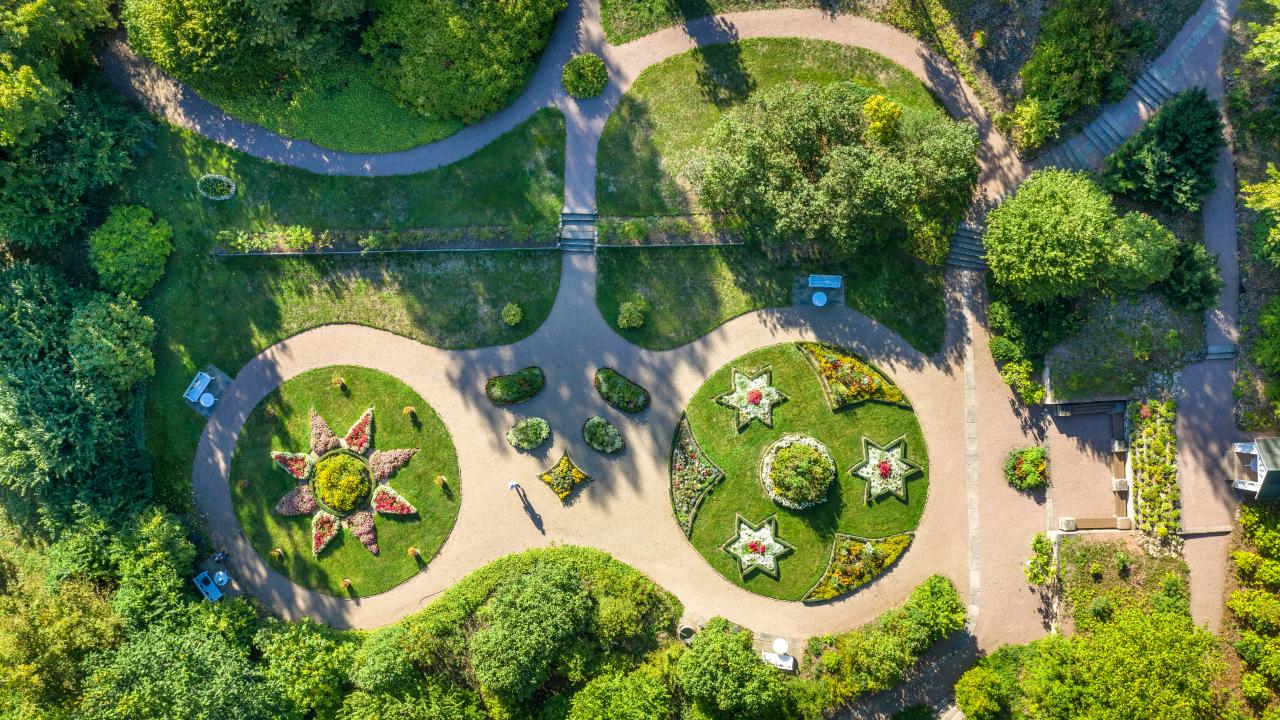 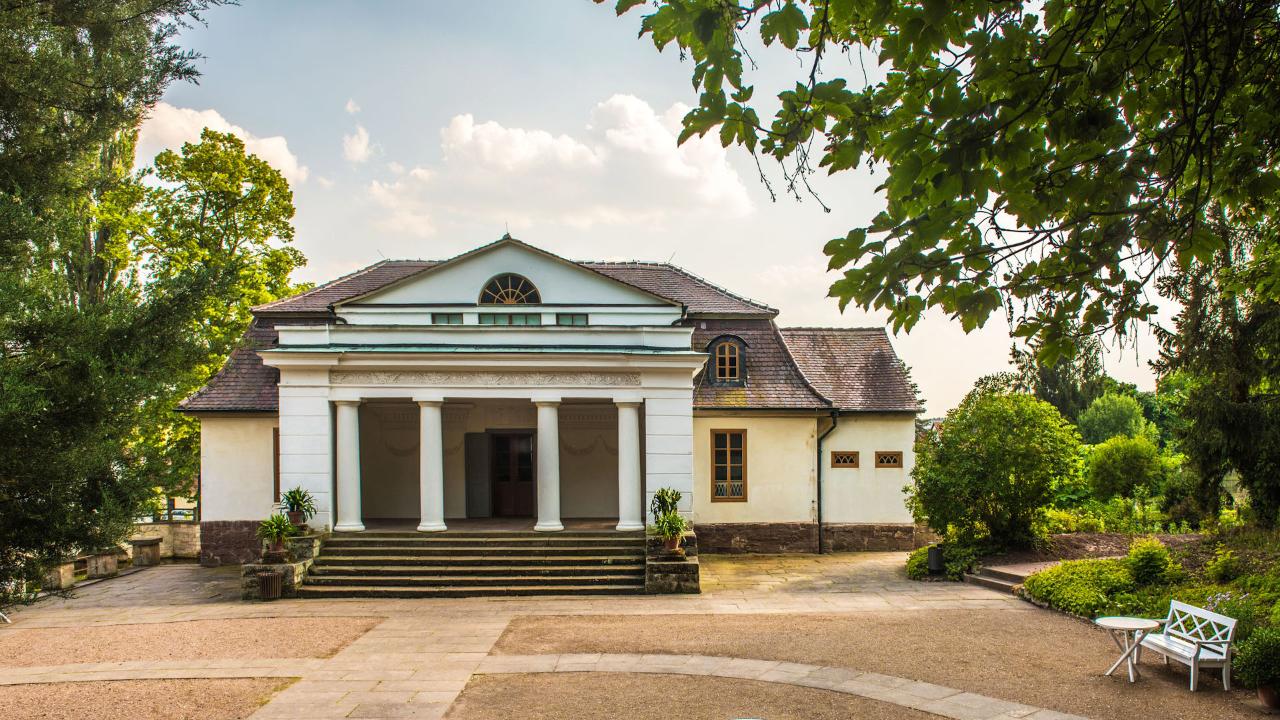 Flowers and box trees have been arranged on two circular beds to look like the sun, the moon and the stars, shining beautifully and brightly. Opposite, some steps covered in flowers lead up to a small hut from where you have a wonderful view over the colourful beds. The design still follows Goethe’s colour wheel, with the flowers staggered in complementary colours from the light edge to the strong centre. The poet would have enjoyed visiting even without Charlotte.

This theatre is a real gem, and was built in around 1800 by Carl von Stein, Charlotte von Stein’s eldest son, who wanted his own little slice of Weimar-style culture on the Kochberg estate. Today, renowned artists perform works here from the baroque, classical and Romantic periods to widespread acclaim.
discover more