A tale of music and theatre

Wow, this looks very grand! I’m really impressed by Elisabethenburg Palace’s semi-circular facade. From above, it probably looks like half a doughnut or a crescent moon. Behind it lies the courtyard with the marble fountain and the grand three-winged palace complex. Elisabethenburg Palace was the residence of the Dukes of Saxe-Meiningen. At the end of the 19th century, under Duke Georg II, its court theatre and orchestra drew attention and admiration across Europe. I’m keen to find out more and head off on my tour of discovery. Two floors, 50 exhibition rooms, and me and my camera!

All good things come in threes

As I approach the main entrance, I read the display cases and signs, and it hits me that this is quite a busy place. In the past, the semi-circular building was home to the ministries of the Duchy of Saxe-Meiningen, but now you will find the mayor’s office, the registry office and various other public and municipal offices here. The oldest part of the palace, called Bibrasbau, houses the Meiningen state archive, the municipal archive and the Max Reger music school. But I’m much more interested in the palace’s three-winged complex, so I continue to make my way past posters and signposts. All good things come in threes, as the saying goes, and there are three museums to explore here: Elisabethenburg Palace Museum, the Zauberwelt der Kulisse theatre museum in the former ducal riding hall, and the Literature Museum in the Baumbachhaus. Well, I’ll just have to see how much time I have! 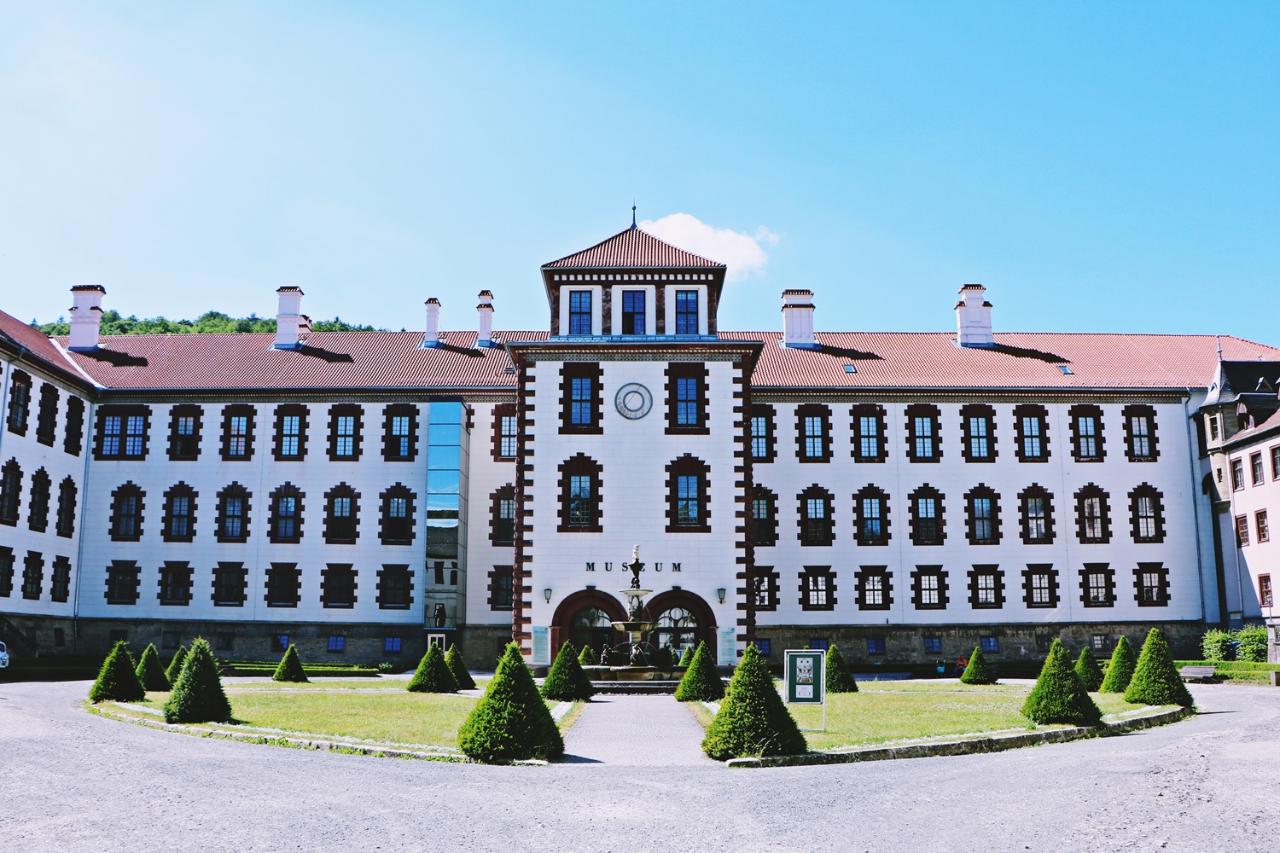 On the spur of the moment, I decide to ask the staff and the cashier at the palace’s ticket office for their insider tips and favourite places. And they don’t need long to think about what sets their heart fluttering. For the lady (the cashier) it’s the Adelaide Room, for the gentleman it’s the Music Room. That’s easy enough to remember. I begin my foray into the museum and climb the old stone stairs. “All original 17th century!” chimes the voice of the helpful staff member behind me as I whip out my camera to photograph this impressive staircase. Having arrived on the upper floor, I join an informative tour about the many journeys of Duke Georg II of Saxe-Meiningen and Helene von Heldburg. I learn that the two of them loved places with beautiful architecture and drew on their experiences when back in Meiningen. Tratzberg Castle in South Tyrol, for example, was one of their influences. Their other great passion was music and theatre. In 1876, Georg II visited the Bayreuth Festival and was so taken with it that he established the Meiningen Theatre, which later earned him the nickname Theaterherzog, literally ‘theatre duke’. What I particularly like in this section of the museum are the ‘12 things you should know about Shakespeare and Meiningen’. I’ll tell you part of the story, but you’ll have to visit the museum to find out more. Georg II was so crazy about Shakespeare’s plays that he travelled to England to see them performed, and fell in love with two Shakespearean actresses during his lifetime. 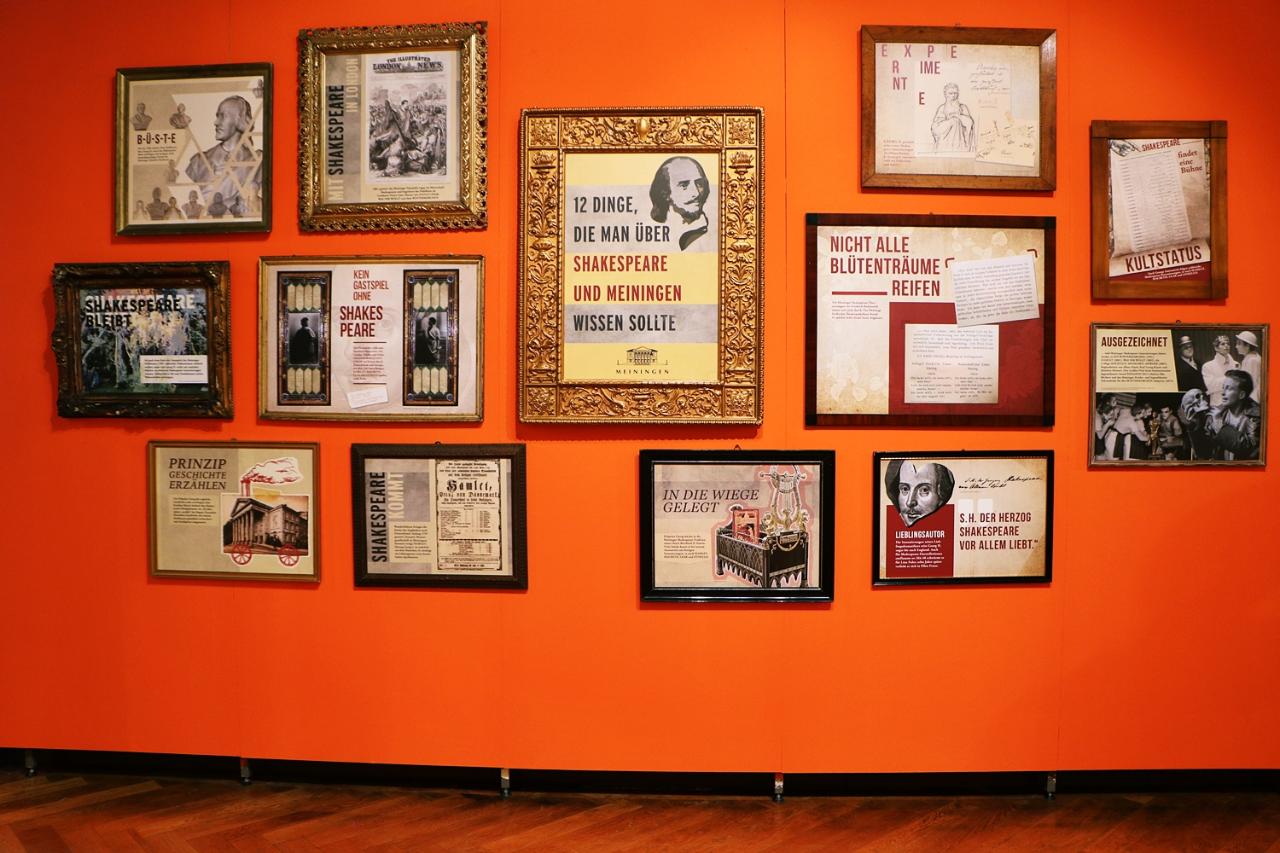 After taking in the ducal living room with its exquisite furniture, wooden ceiling and beautiful fireplace, I encounter the composer Max Reger. Or should I say his briefcase, his conducting score and baton, and his cigarette case and nicotine tablets. To fully appreciate this display, it’s important to know that the composer, pianist and music director was for some time addicted to beer, wine, cognac and tobacco. No wonder given his workload, which alongside his job as music director to the court included busy tour schedules and teaching at Leipzig Conservatory. That would take its toll on anyone, even a great like Max Reger! His desk and a grand piano from his wife Elsa Reger’s estate are on display in the museum. Besides Reger, composer Hans von Bülow and actor Ludwig Chronegk also worked in rooms at the palace. Even Johannes Brahms was a frequent guest at the palace during his visits to Meiningen for work and to see friends.

The sound of historical instruments

You simply have to see this. Or should I say, hear this! You enter the former ducal library and see the collection of historical musical instruments. As you approach the display cabinets to take a closer look at the lute, harp, violin and other priceless instruments, they suddenly start playing – just like that! A step to your left and the next instrument starts playing. Another step further and it’s the next one. This exquisite collection and the ducal dining room are highlights of the new exhibition at the palace. And you can see why. I look around and notice that all the other visitors are equally spellbound. My tour continues through magnificent palace rooms with equally luxurious interiors: the Wooden Room in the Empire style, the Red Room, the Yellow Room and, last but not least, the magnificent Marble Hall, which is still used today as a venue for concerts and events. 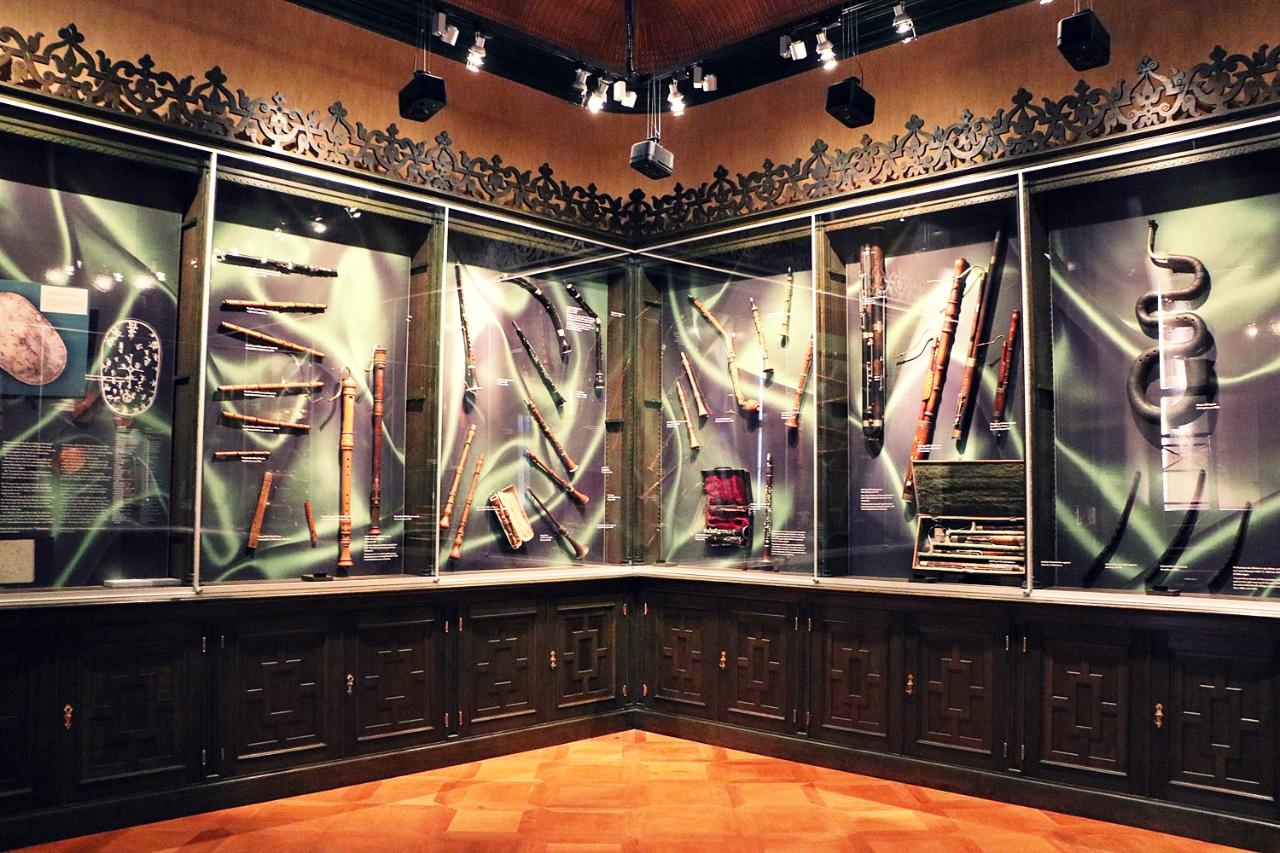 It might even be the world’s most beautiful baroque café. I’ve certainly never seen anything like it. White stucco and elaborate decorations at every turn. Large mirrors in between, the oversized windows lined with heavy red curtains gathered at the sides with cords. I briefly step outside onto the terrace of the tower café and am thrilled by the magnificent view over the roofs of Meiningen. You really have to come and see this! Back inside the Hessen Room, I spot the cake counter with any number of freshly baked delights to choose from. I settle for a piece of nut brittle cake – yum! My batteries recharged, I head off for the second part of my tour.

What connects Australia and South Africa with Meiningen?

The middle floor of the palace is mainly dedicated to the art collections. I’m amazed by the huge number of coins on display, and read on a sign that Meiningen was not only a royal seat but also an important mint for more than 200 years. I stroll through rooms with historical furniture and countless paintings, including works by the court painter Carl Wagner. And finally, I come to the cashier’s favourite place: the Blue Salon, or Adelaide Room. Everything is bathed in a delicate blue. Your gaze wanders from the glittering chandelier to the gold-framed mirror and on to a beautiful writing desk and the many paintings on the walls. And there she is: Adelaide. From a distance, you might actually think she’s real. The longing look out the window speaks volumes. She came a long way in her lifetime: Adelaide, Princess of Saxe-Meiningen, became Queen of the United Kingdom and Ireland in 1830. Two cities, one in Australia and one in South Africa, were named in her honour. But never mind that, I think this is now my favourite room as well! 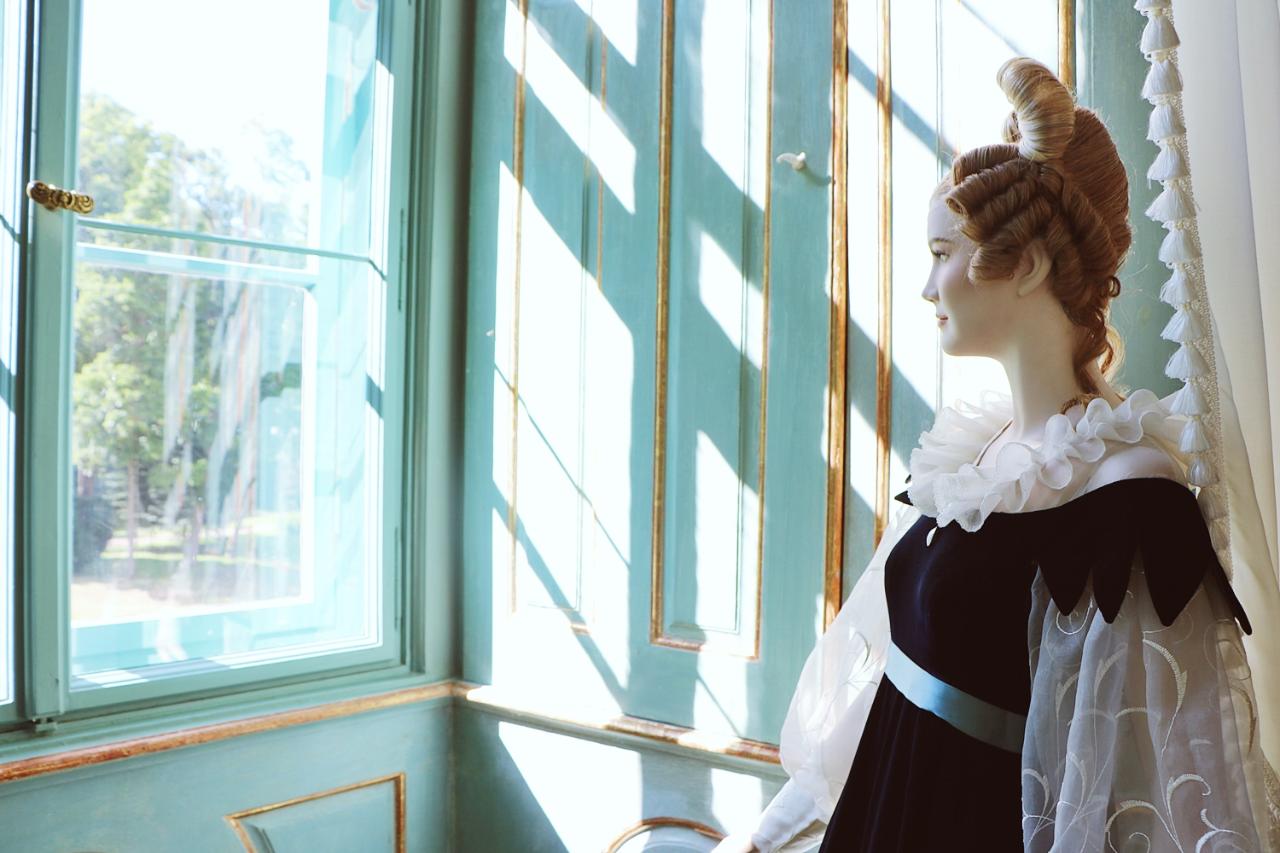 The Church of the Holy Trinity welcomes you with music by Johann Ludwig Bach, a member of the Bach family from Meiningen. Some of his cantatas were later performed by the more famous Johann Sebastian Bach in Leipzig. Originally built as a place of worship, the church was transformed into the Johannes Brahms concert hall some decades ago. The modern concert organ was installed in 1986. I walk on and reach the seemingly endless, towering corridor in the central gallery. It smells of floor polish and my shoes squeak on the smooth surface, creating an echo in the otherwise silent, museum-like space. My watch tells me it’s time to visit the park, and just a few minutes later I’m walking beneath ancient trees whose large canopies provide some welcome shade. I catch sight of sculptures scattered around the park, and enjoy a quiet moment on one of the bridges spanning the Werra river as I stare at the water below. Lost in thought, I know for sure that I’ll be back. And next time I’ll definitely visit the theatre and literature museum. 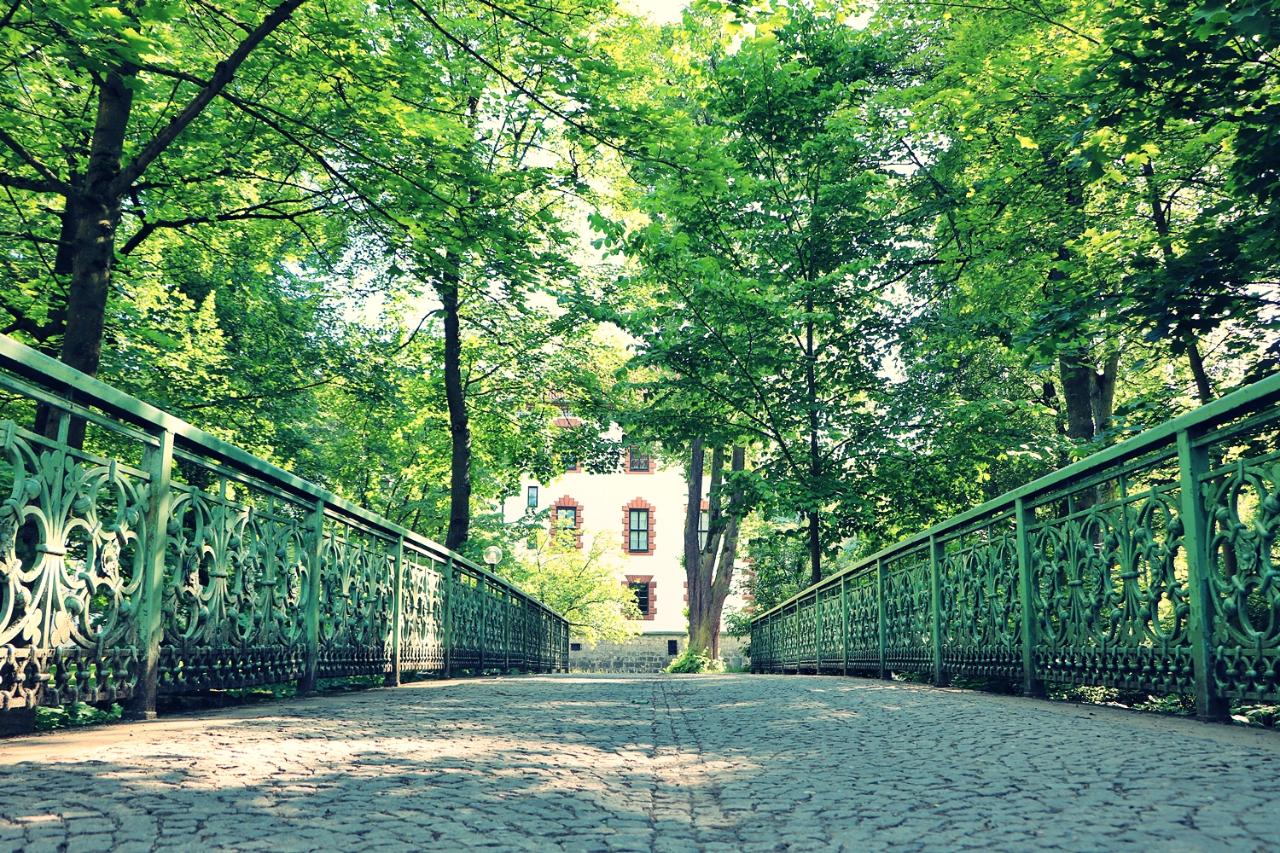 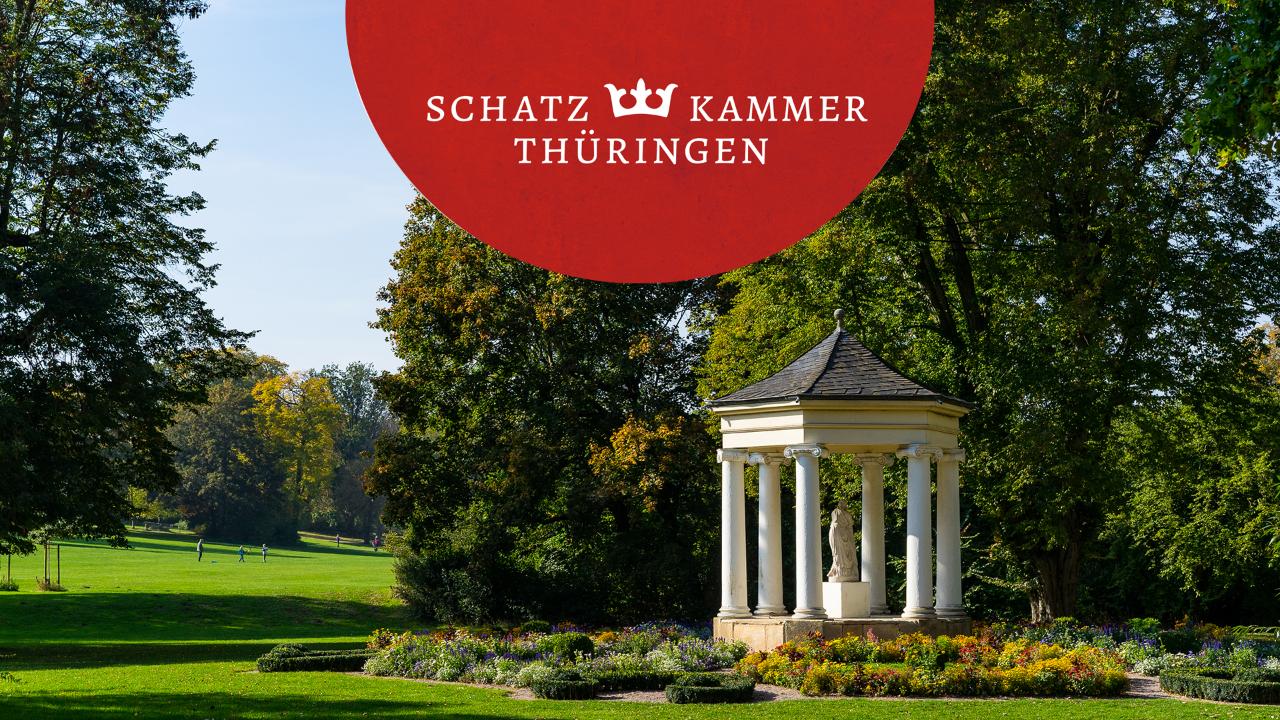