Jewish life in the Middle Ages and in the 19th century

For many centuries there was a continuity of Jewish life in Thuringia. Unique artefacts and treasures bear witness of its cultural wealth. The first Jewish communities in Central Germany were founded in the Middle Ages.

Jewish life in Thuringia in the Middle Ages

For many centuries there was a continuity of Jewish life in Thuringia. Unique artefacts and treasures bear witness of its cultural wealth. The first Jewish communities in Central Germany were founded
in the Middle Ages. For the most part, Jews and Christians lived peacefully as good neighbours. Intellectual debates were enhanced by the contributions of Jewish scholars and Jewish bankers had
a significant role in trade and economy. Yet there were also repeated attacks on Jewish communities, culminating in the “plague pogroms” of the mid-14th century and the Erfurt massacre on March 21,
1349. Only a few years after this catastrophic event, Jews once again began to settle in Thuringia but were burdened with heavy taxes and discrimination laws. In the middle of the 15th century, Jewish
citizens were expelled from all major cities. The most impressive architectural testimony of the early bloom of Jewish culture in the medieval period can be found in Erfurt. 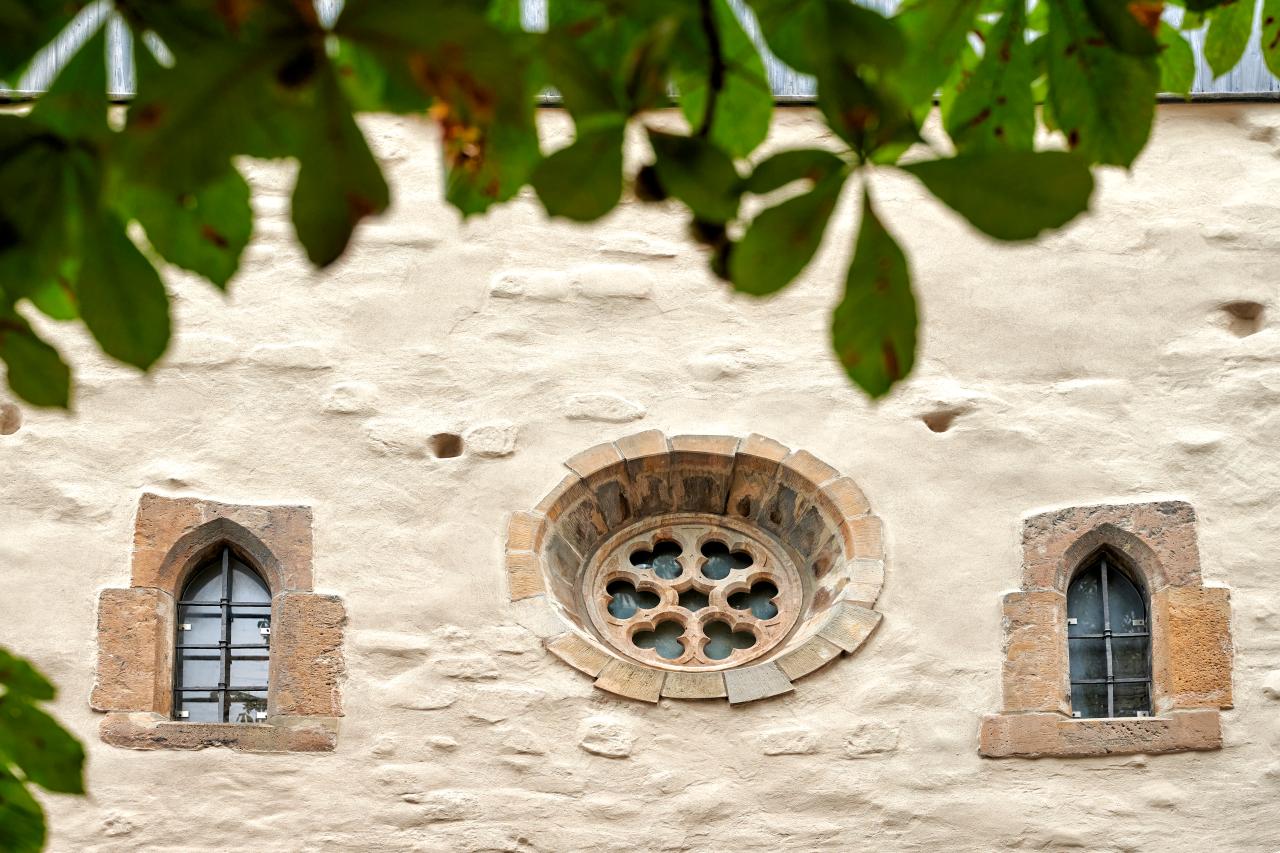 Strolling through Waagegasse, it is all too easy to miss the impressive façade of the Old Synagogue, hidden away as it is in a courtyard in this old part of town. The building’s extraordinary charm reveals itself as you enter. The interior was restored to reflect the centuries of chequered history. Dating back to around 1100, the Old Synagogue is the oldest well-maintained synagogue in Central Europe. Parts of the building were added at later times in order to accommodate the growing community.

Yet after 1349, the Old Synagogue was no longer used as a house of worship. Throughout Europe, the spread of the plague served as an excuse for pogroms against Jews. Erfurt was no exception. On
March 21, 1349, the flourishing Jewish life of the city was obliterated. The city then sold the Old Synagogue to a merchant who converted it into a warehouse. In the late 19th century, further remodeling work was conducted and the building was used as a restaurant. Thus changed – and
closed in on all sides by neighbouring buildings – the Old Synagogue had become almost unrecognizable. It was only after 1990 that architectural research of the property revealed the largely preserved synagogue, which was conserved and opened as a museum in 2009.
The Old Synagogue exemplifies and visualizes the history of the first Jewish community in Erfurt as well as its own architectural history. The museum houses the Erfurt Treasure (see pp.16/17) that was buried near the synagogue by a Jewish banker shortly before the massacre of 1349. Other exhibits include facsimiles of the Erfurt Hebrew Manuscripts and the 12th-century "Judeneid", the oldest remaining “Jewry Oath” written in German.

On the Gera, right behind the Krämerbrücke, you will find the medieval mikveh, which was first recorded in 1248/49. Steps led down to the stone water basin. Several layers of large sandstone slabs
are laid down at what was then water level. One of these slabs, walled in upside down and originally hidden beneath mortar, is embellished with a head wearing a crown of lilies. The meaning of this
almost 30 cm large relief remains a mystery. In line with orthodox regulations, the bathing facility is in contact with “living”, i.e. groundwater. Men would visit the bath prior to High Holy Days, women after
childbirth and their periods. A window allows a glimpse of the basin outside of a guided tour.

Erfurt mikveh on the banks of the Gera river, near the Krämerbrücke ©Stadtverwaltung Erfurt

Tip: Cemetery and mikveh in Sondershausen

Rediscovered in 1998/99, the mikveh in Sondershausen is the earliest remnant of Jewish life in the town. Fed by ground water, the basin was located in the cellar of a house that was built even before the construction of the city wall and probably destroyed during the 1349 pogrom. The first record of a Jewish community after the pogrom dates back to the late 17th century. At that time, the Jewish cemetery on Spatenberg was established. A plaque commemorates the synagogue on Bebrastraße, which was severely damaged during WWII. The mikveh and Jewish cemetery can be visited on guided tours.

Jewish life in Thuringia in the 19th century

Throughout the 19th century, reform legislation improved the situation of Jews across Europe. In the middle of the century, new synagogues were built in Erfurt, Mühlhausen, Sondershausen and Southern Thuringia. Jewish Thuringians contributed significantly to the state's social and political life. Some of their names are still remembered, like the brothers Moses and Loeb Simson, who laid the foundation for what was to become the famous motorbike brand.

In 1810, David Salomon Unger became the first Jew to receive full franchise in Erfurt since 1453. His son, Ephraim Salomon Unger, was even named citizen of honour in 1860. The exhibition in the cellar of the Small Synagogue focuses on the history of Erfurt’s Jewish community and its key figures in the 19th and 20th century. Consecrated in 1840, the Small Synagogue soon became too small for the growing Jewish community. Services moved to the Great Synagogue (completed in 1884, destroyed during the November Pogroms in 1938) and its smaller predecessor was converted into living quarters and storage space. This saved the Small Synagogue from destruction during the Nazi era. After the renovation, the interior now looks almost as it did originally. 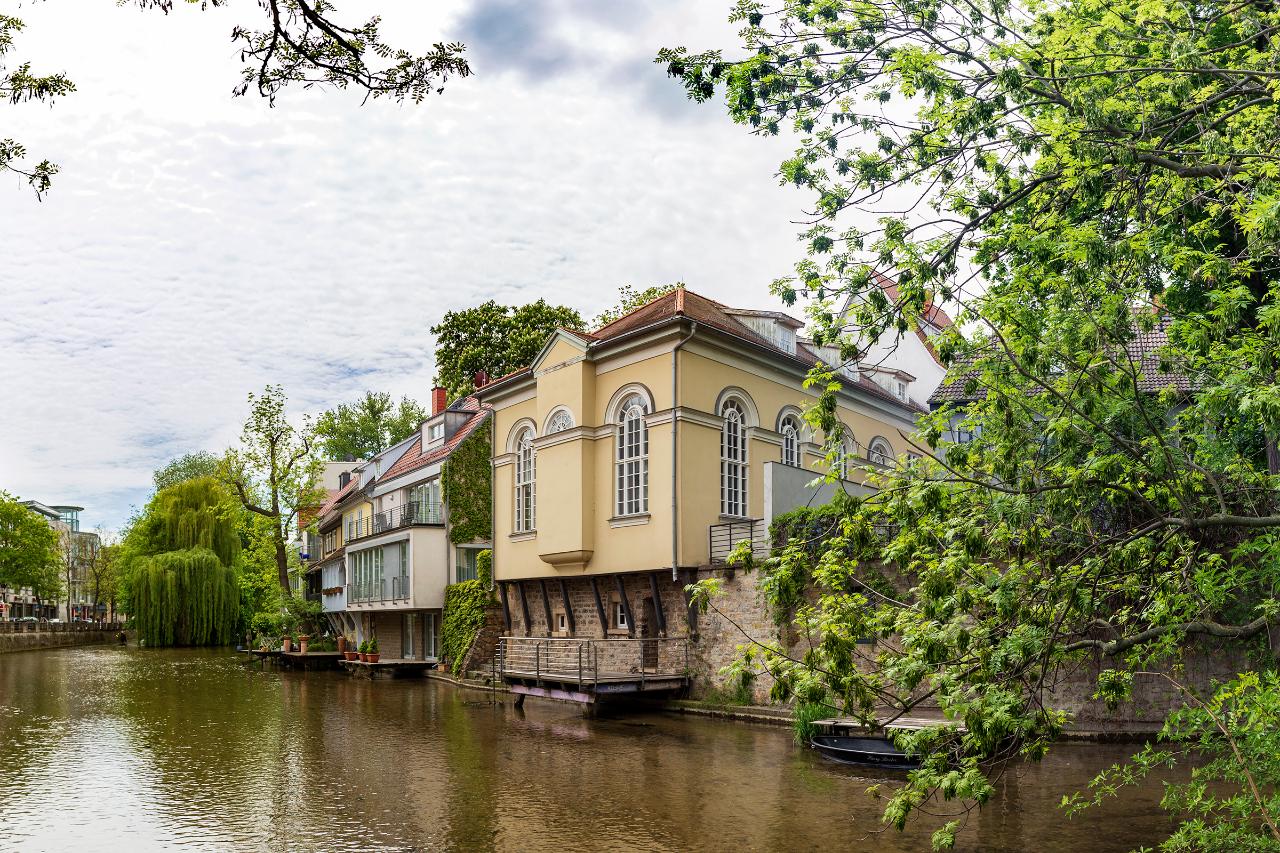 “So kommet in seine Tore mit Danklied – in seine Höfe mit Lob.” (“Come into His gates with thanksgiving / His courtyards with praise”) – this verse from Psalm 100 adorns the middle entrance of the Mühlhausen Synagogue. Construction of the synagogue began in 1840 in the rear courtyard of a Jewish community center on Jüdenstraße. However, there had been Jews in Mühlhausen as early as 1230, as the Mühlhausen Codex, the oldest town codex written in German, records. There are also official records of a synagogue from the year 1380. Back then, Mühlhausen was, after Erfurt, the second most important town in Thuringia. However, it wasn't before the era of the Kingdom of Westphalia (1807 – 1813), of which Mühlhausen was a part, that Jews were fully franchised. On November 9, 1938, the synagogue was defiled but remained otherwise intact. Re-consecrated in 1998, it is once again a place of worship and cultural events. The Jewish cemetery, consecrated 1842, is located on Eisenacher Straße.