What should we wish for? World peace? A cappuccino and a slice of cake? A hot Thuringian bratwurst slathered in mustard? A car, a house, a boat? Or maybe just plenty of sunshine over the next two days? More money? Or perhaps more time would be better? Definitely good health, that’s the most important thing. I think we can all agree on that. 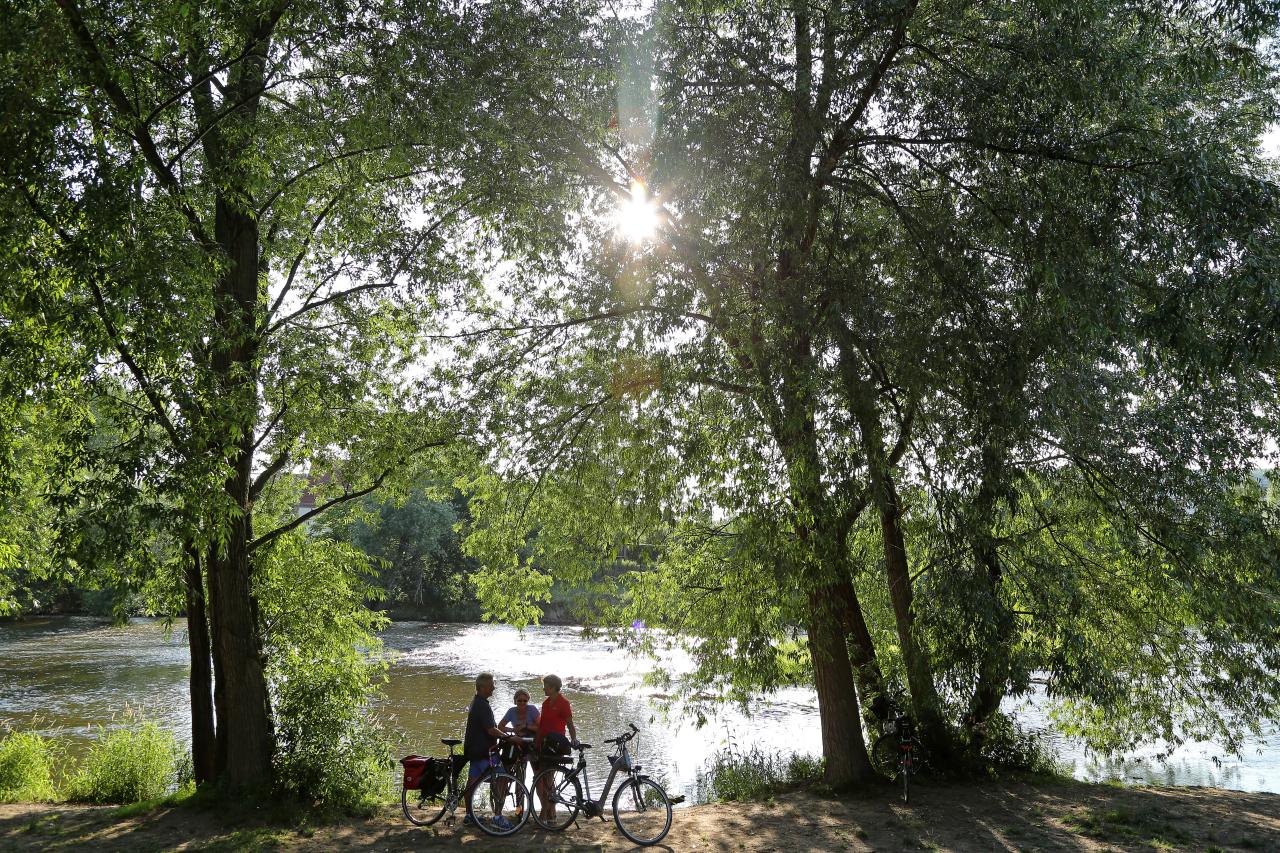 There’s plenty of time to think when you’re pushing your bike, and there’s plenty of pushing on the last stretch from the Saale valley up to Leuchtenburg Castle. It sits in splendour on a rock high above the little town of Kahla and makes for a worthwhile detour on our bike trip along the Saale Cycle Route. The castle’s Porcelain Worlds exhibition relates the history of porcelain in an engaging and entertaining way. For centuries, the ‘white gold’ played an important role in Thuringia’s development. The valley below is home to the Kahla porcelain factory, which still produces fine tableware today. Up here within the historical walls of the old castle, there is also a whole host of things to discover on that subject: the world’s largest vase, an interactive exhibition where children can experiment with mixing the basic materials for making porcelain, an archive of wishes, a scriptorium and the skywalk of wishes. One might say this is a place where you can explore your wishes and make them come true.

At the entrance to the scriptorium, there’s a quote from Johann Wolfgang von Goethe, perceptive as always and with an unerring eye for what’s important: “Our wishes are presentiments of the abilities that lie in us, harbingers of what we will be able to accomplish.”

Picture the scene: down in the castle’s cellars, there’s a large pile of white plates. There are also three booths that look a bit like the ones in which you cast your vote at election time. Each has a dark curtain that you can pull across to keep out prying eyes. Inside, the only illumination comes from a UV lamp above, and there are pens that write in ink you can only see under this light.

So I write my wish on a plate and head back into the daylight. Once outside, the plate is plain white again, and nobody can read what I’ve written on it. We stride out onto the skywalk of wishes, which extends beyond the castle walls and out over the Saale valley. I hold my plate, concentrate on my wish and … fling the plate into the valley. It crashes onto the large heap of porcelain that has accumulated down below and shatters into a hundred pieces. According to German folklore, broken crockery brings you luck, so we should be fine from now on. 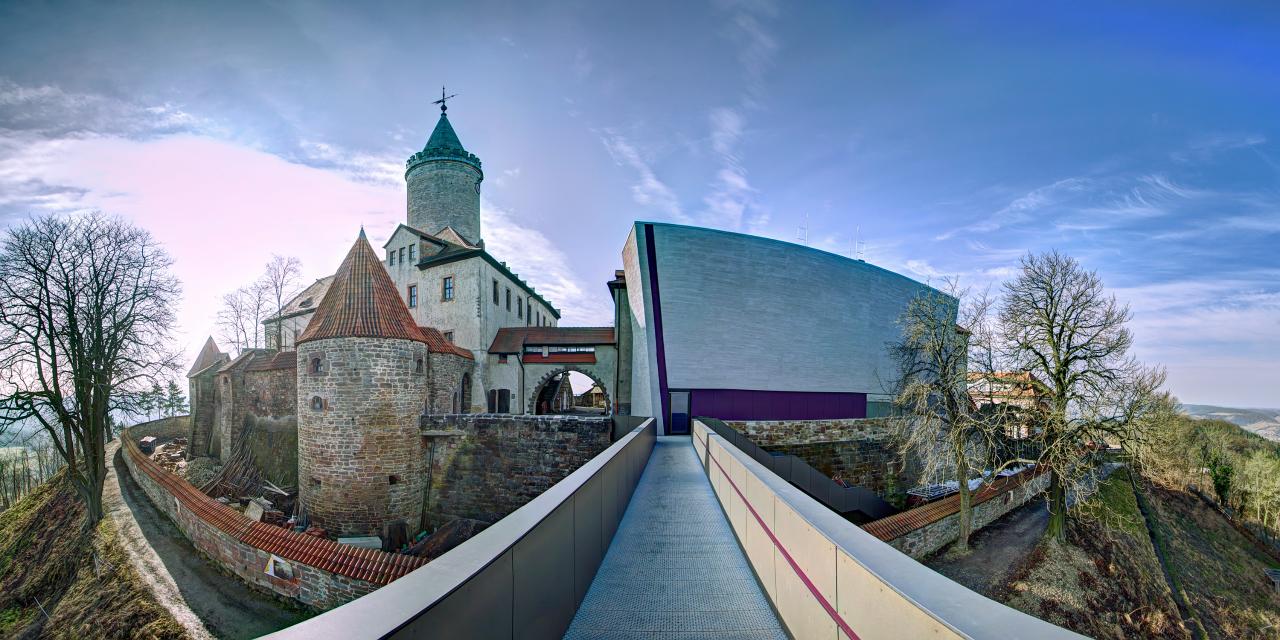 We are riding along the Saale Cycle Route. Our starting point this morning was Rudolstadt, and our destination this evening is Jena, the lively student city on the river Saale – a mere 40 kilometres away. That would probably take just over two hours with a bit of effort, but we prefer to take it easy. We’ll allow time for a stroll around town, to visit the odd museum and maybe enjoy a cappuccino or two. The day started well in Rudolstadt. Heidecksburg Castle, a large, yellow building, towers above the town’s small market square. Widely regarded as the grandest 18th century baroque palace in the Free State of Thuringia, it is well worth a visit. There are exhibitions throughout the year, including the permanent ‘Rococo en miniature’ display featuring several palaces at a scale of 1:50, a portrait gallery, a porcelain showroom and a museum of natural history. 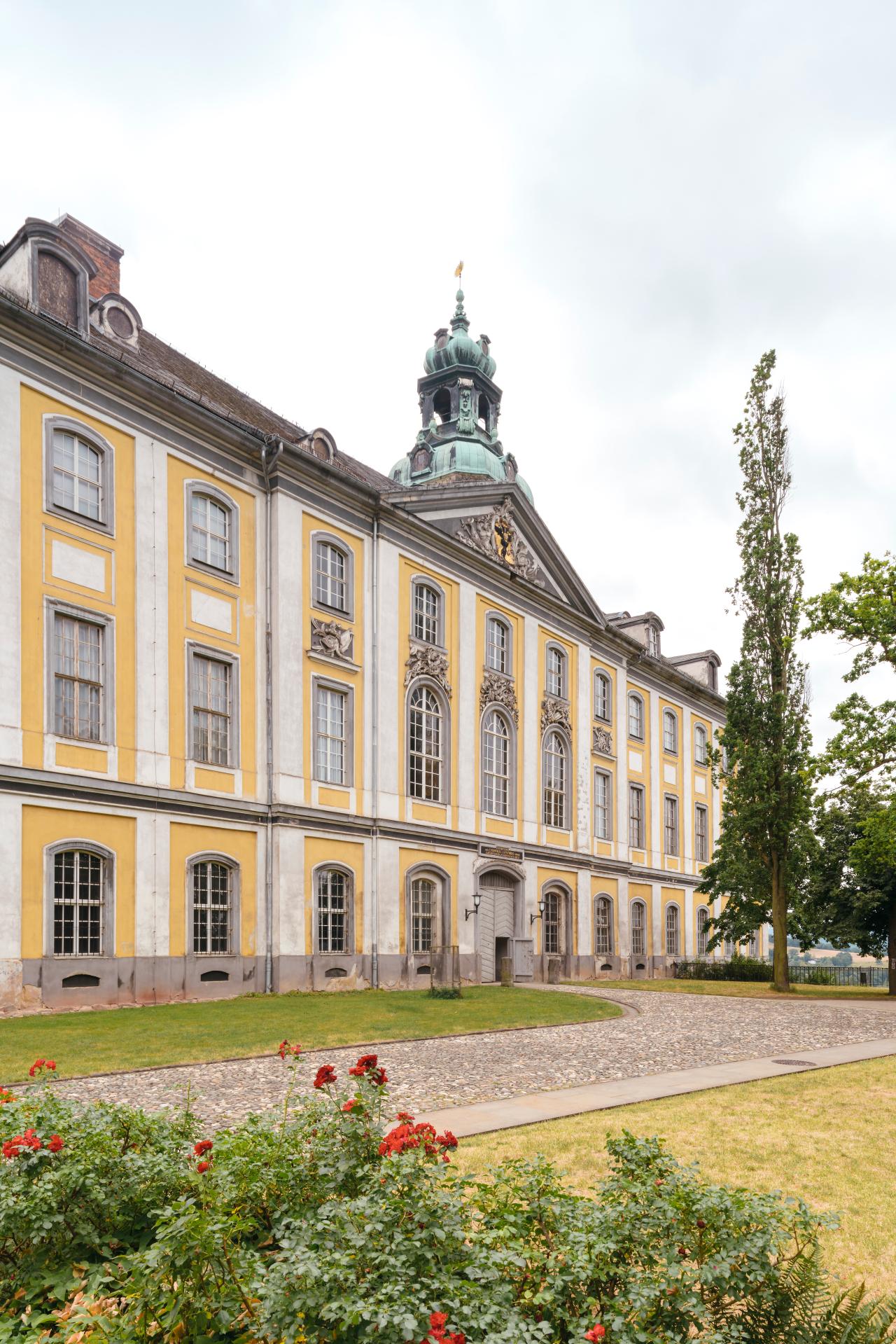 The Saale Cycle Route runs from the source of the river Saale in Zell im Fichtelgebirge to its confluence with the Elbe near Magdeburg, crossing several states and covering more than 400 kilometres. The longest and most beautiful stretch of the route is in Thuringia, starting in the Thuringian Slate Mountains/Upper Saale region. Many of the climbs here are quite literally breathtaking, perfect for more ambitious cyclists and those with electric bikes. Along the route lie the Saale reservoirs and pretty towns like Blankenburg, Saalburg, Saalfeld, Rudolstadt and Jena, to name but a few. After Saalfeld the route becomes easier and is quite suitable for families as well. Although you still have to tackle the odd ascent, it’s nowhere near as challenging as the Upper Saale section.

We’d been able to see Leuchtenburg Castle up ahead in the distance for a while, but near Orlamünde, where the cycle route runs along a plateau on the opposite side of the Saale, it made for a particularly beautiful sight. Just before Kahla the route drops steeply until it reaches the river. The water tourers’ rest area on the riverbank is a perfect place to stop off. 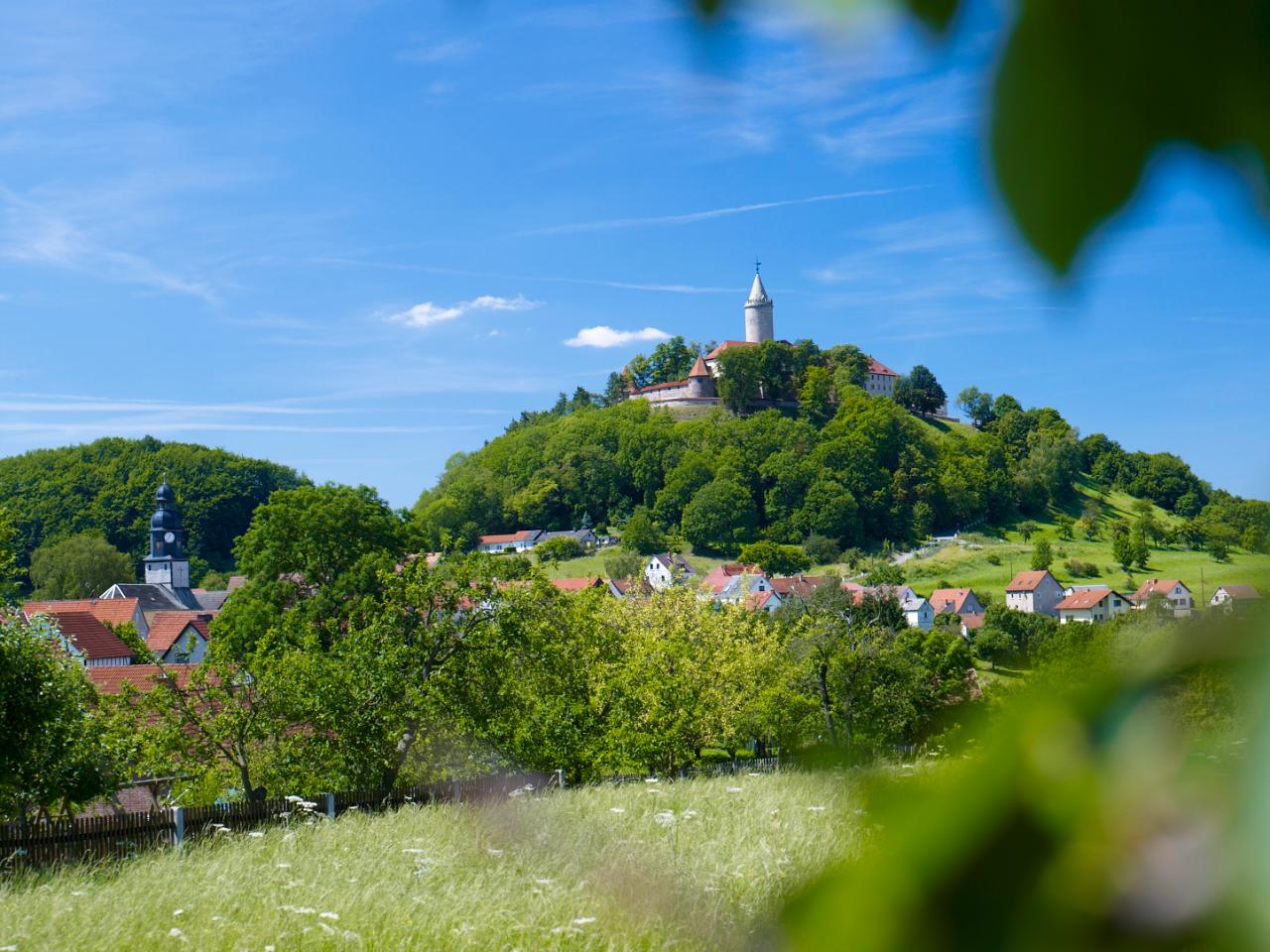 The Saale Cycle Route is well signposted throughout. It mostly follows cycle paths away from the road, or small, quiet back roads. We cycle through fields and forests, past beautifully kept allotments and through tiny villages with cute names like Kleinkrossen, Grosspürschütz and Kleineutersdorf. We rarely see the Saale river up close today, but we often catch glimpses of it through the bushes and trees as we savour summer with all of our senses. 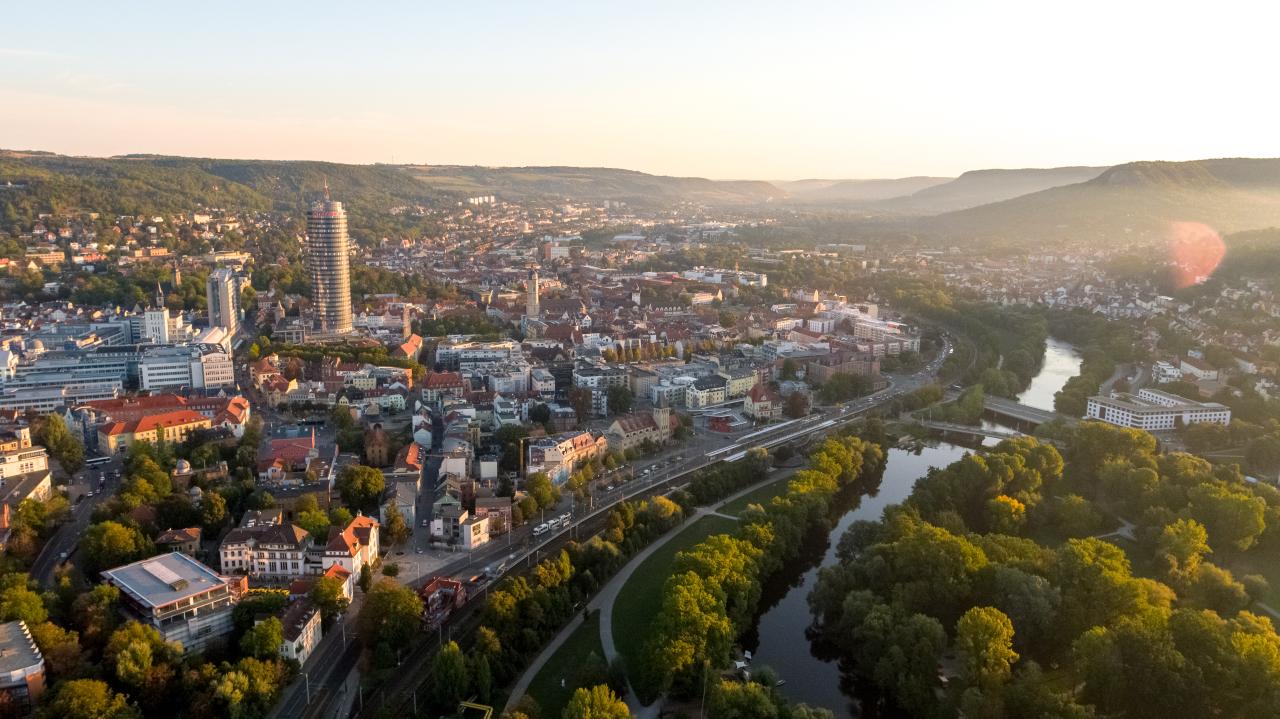 We soon realise that despite being a hub of industry and a university city, Jena is also very green. The Saale Cycle Route first takes us through a large Soviet-era housing estate in Lobeda on Jena’s southern edge, but this is soon followed by a long stretch of green in Seidel Park, and then on across the city centre to a picturesque riverbank with beach-like areas on the water’s edge in the northern part of the city. It looks like there’s a bit of a party going on here, making the most of this summer’s day. Some guys have got their guitars out and are playing music, while elsewhere people are playing, laughing and having barbecues. How about a short stop here? With a cappuccino and a slice of cake perhaps? Or maybe we can go dangle our feet in the river and daydream for a bit? On the other side of the river we can see the lights on the JenTower.

Today’s destination isn’t much further. We’re heading for the campsite near Ostbad, where you can find what is probably the quirkiest accommodation around: the Airstream-Hotel Jena. Here you can spend the night in lovingly and expertly restored examples of that legendary American caravan. The campsite itself is also worth a visit. It might be relatively basic, but it sits in a quiet spot with lovely views of Jenzig hill. And the owners are very creative, charming and welcoming. 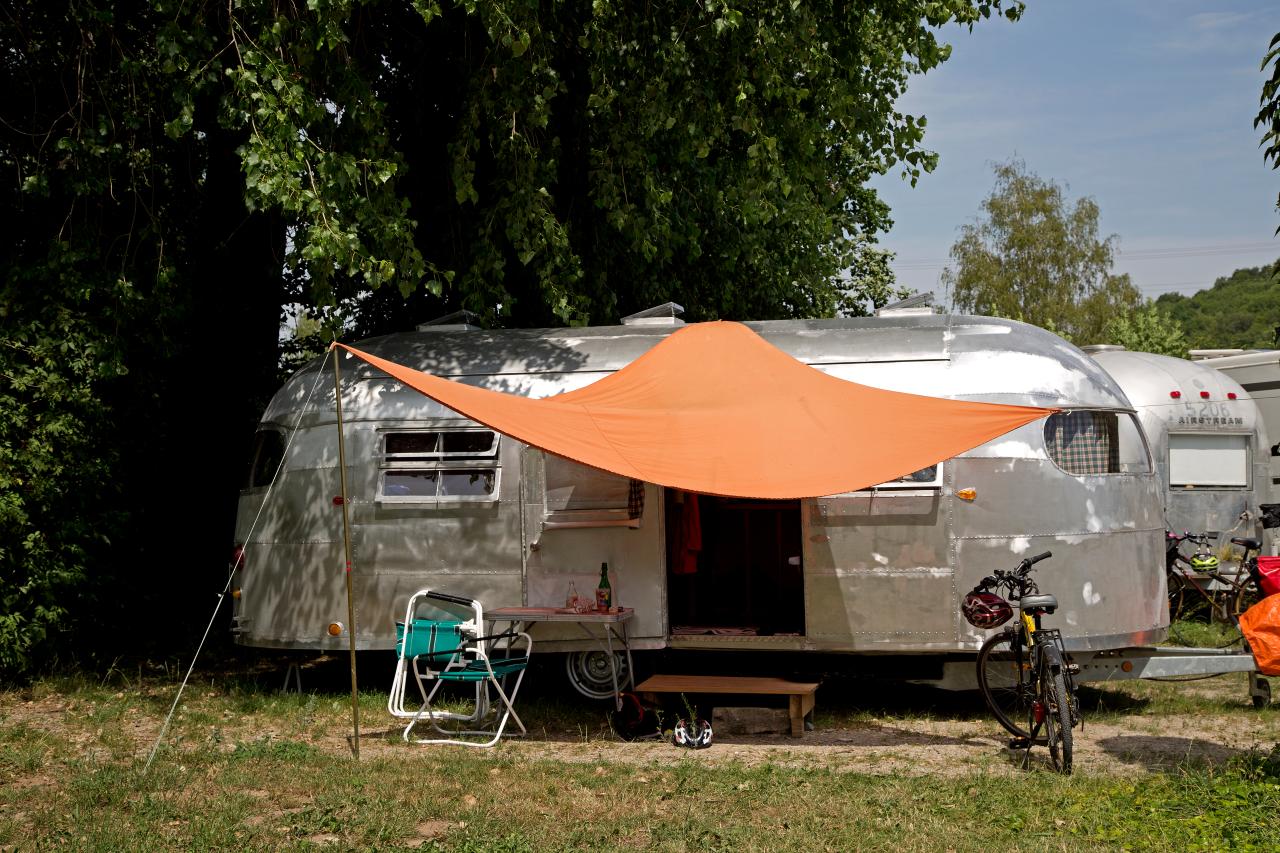 So what are we going to do this evening? Dinner at Scala, the fancy restaurant at the top of the JenTower with great views over the city? Perhaps followed by a nightcap in one of the restaurants and bars in lively Wagnergasse? Or maybe we’ll just take in the vistas from the viewing platform, grab a Thuringian bratwurst and spend a quiet evening on the terrace of our Airstream caravan? Which one of our wishes will come true this evening, I wonder?

The route runs for 403 kilometres from the source of the river Saale in the Fichtel Mountains to its confluence with the Elbe in Barby near Magdeburg. A 180-kilometre stretch passes through Thuringia. Places of interest along the way include Burgk Castle, the Fairy Grottoes in Saalfeld, the Porcelain Worlds exhibition at Leuchtenburg Castle, the Zeiss Planetarium in Jena and the Dornburg Palaces.