The Sistine Chapel of the North

The Panorama Museum in Bad Frankenhausen

Many visitors are engrossed in conversations as they slowly ascend the 80 steps to the hall where the painting is displayed. They feel they already know what to expect, as the clue to the museum’s content is in the name: Panorama Museum. But once they reach the last set of steps they suddenly pause – they’ve caught their first glimpse of the actual painting.

When they finally get to the visitors’ platform of the panorama hall it’s not just the children’s eyes that suddenly widen in awe, as reverent murmurs of “ah” and “oh” fill the picture dome. For a few seconds they just stand there and let their gaze wander until they have turned full circle and taken in the whole of the painting – the panoramic view. The picture’s visual impact, created by its vivid colours and the huge number of figures featured, pretty much forces some people to avail themselves of the soft leather seats in the hall, where they sit in rapt silence as they examine the panorama once again. This is something that Silke Krage, who has been working at the museum for 32 years, notices time and again when taking visitors on a guided tour.

She herself also continues to be fascinated by the monumental painting, which uses the stylistic language of the old masters to depict more than 3,000 individual figures on 1,722 square metres of canvas. For Werner Tübke, who created the panoramic picture, this commission presented a unique opportunity to finally paint to his heart’s content. He’d often felt that he reached the edge of a canvas far too quickly, as he used to explain. 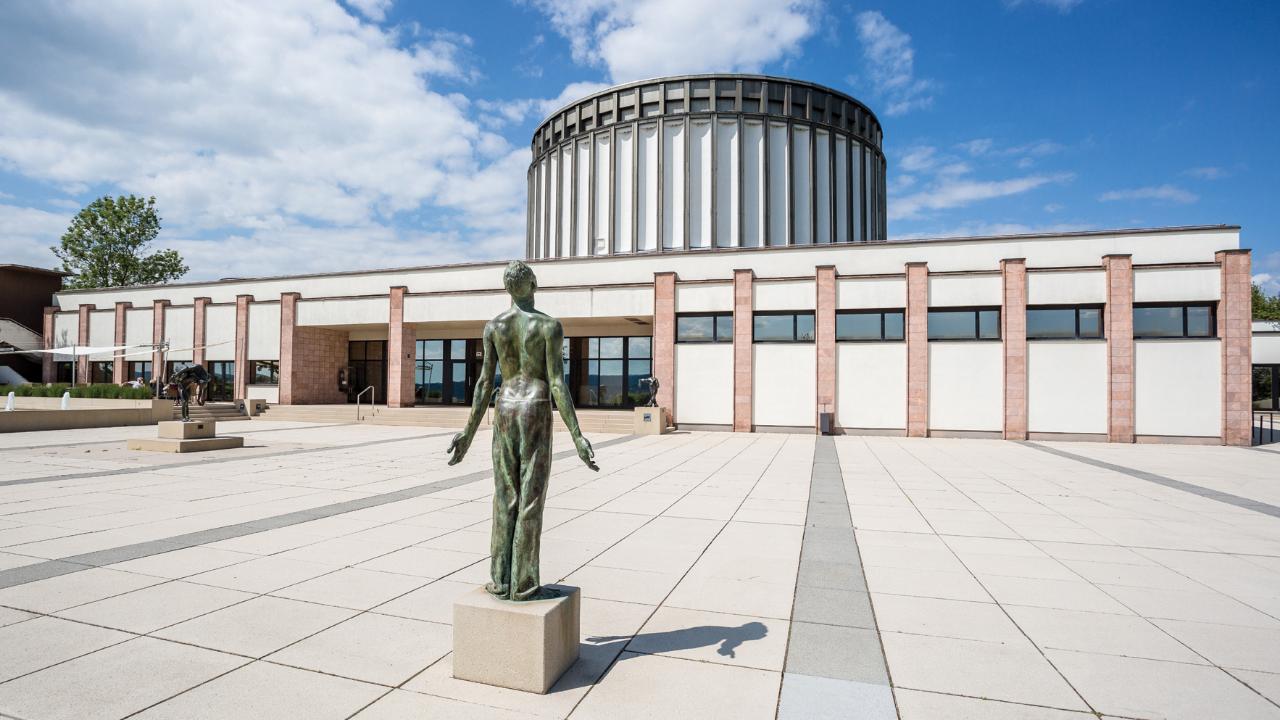 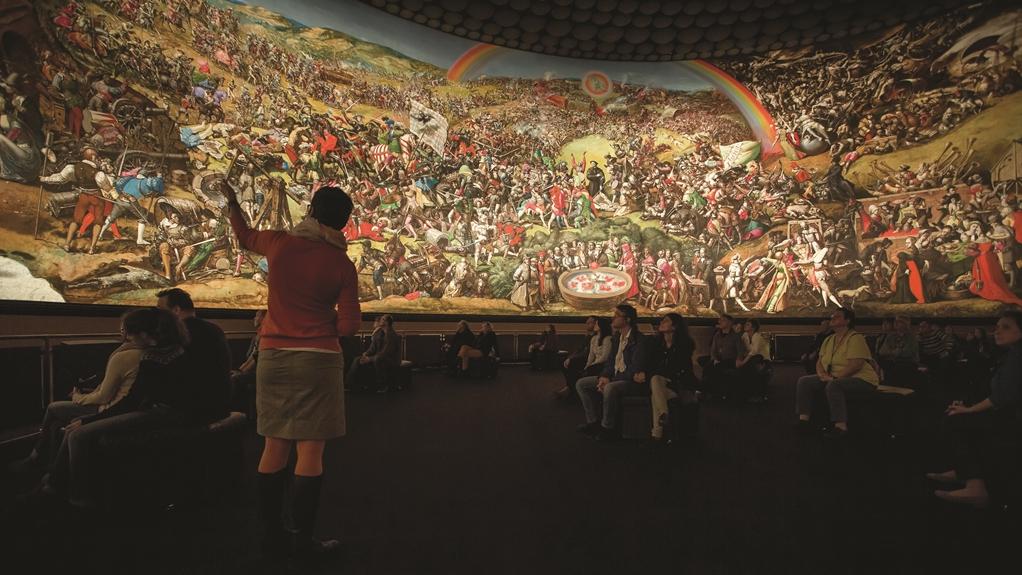 Before tackling the actual painting in the panoramic hall, Tübke, an art professor and principal of Leipzig’s Academy of Fine Arts, created a smaller preliminary version on a scale of 1:10. The outlines of all the figures were meticulously copied from this template and transferred to the canvas in the hall, magnified by a factor of ten. The untreated canvas weighed almost a ton, took 54 men to hoist up, and is fixed to a steel ring at a height of over 15 metres using 576 metal clamps. At the bottom it is attached to a ring of similar size, meaning that it is freely suspended within the space and not attached to the building itself. The installation was an incredible technical feat, as was the extremely precise transposition of the original version (a panel painting) onto the 123 metre long circular canvas.

It took Werner Tübke and his assistants more than four years to create his magnum opus, which ended up weighing just under three tons.

Contemporary figures from the Peasants’ War and representatives of humanism are gathered around the well of fertility and immortality, symbolised by the pomegranate rising up from the surface of the water (Panorama Museum Bad Frankenhausen) ©Dieter Leistner, Würzburg / VG Bild-Kunst, Bonn 2021

“It will either be a work of genius, or we’ll all make fools of ourselves”

Accepting the commission from the East German government was not without risk for Tübke. In 1978, one year before the final selection of the images was settled, he remarked: “It will either be a work of genius or we’ll all make fools of ourselves, not just me.” The fact that the Panorama Museum, which opened in September 1989, not only survived the political upheaval of German reunification unscathed but went on to be awarded the European Heritage Label in 2011, is testament to Tübke’s achievement. 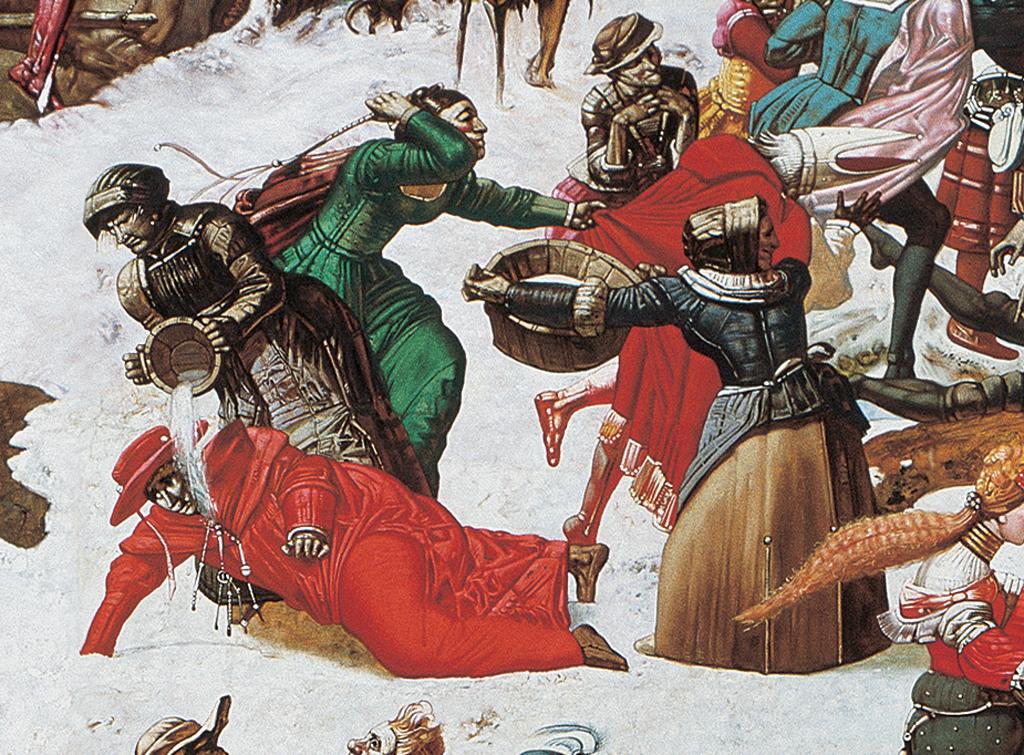 Theatrum mundi – a theatre of the world

Originally conceived as a panorama of the Peasants’ War that would simply illustrate the battle of 14 and 15 May 1525, the work gradually evolved into a theatrum mundi – a theatre of the world – that takes viewers on a journey into the past. The magnificent picture cycle shows European cultural history on the cusp of the late Middle Ages and the modern age, with references to masterpieces by Bosch, Breughel, Dürer, Cranach and many more. Immersion in this imagery with its allusions to religion, history, mythology, philosophy and literature reveals a kaleidoscope of human passions that still exist today, and will continue to do so as long as we remain on this earth and are free to make our own choices.

One piece of advice: trust your eyes, heart and mind. And ideally bring a pair of opera glasses or better still binoculars to support the first! 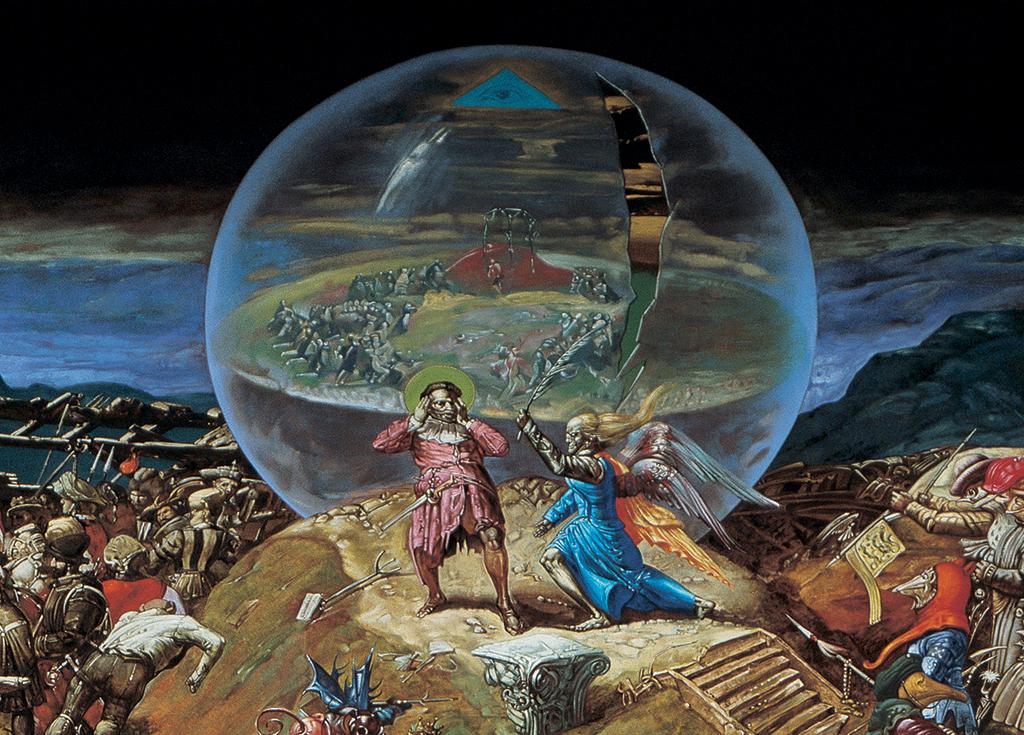 Titelbild: The blue-coloured area spreads across the summer landscape like an ink stain. It is based on the prophesies of Jeremiah ©Rainer Alexander Gimmel, Nürnberg / VG Bild-Kunst, Bonn 2021