Love at first sight in Stelzendorf

We fell head over heels in love with Pâtisserie Bergmann last year. We had no idea what we were letting ourselves in for as we strolled down an unremarkable passage somewhere in a tiny village near Zeulenroda. It’s not like there was going to be anything exciting down there.

We fell head over heels in love with Pâtisserie Bergmann last year. We had no idea what we were letting ourselves in for as we strolled down an unremarkable passage somewhere in a tiny village near Zeulenroda. It’s not like there was going to be anything exciting down there.

Now I know better, as there are in fact the following: 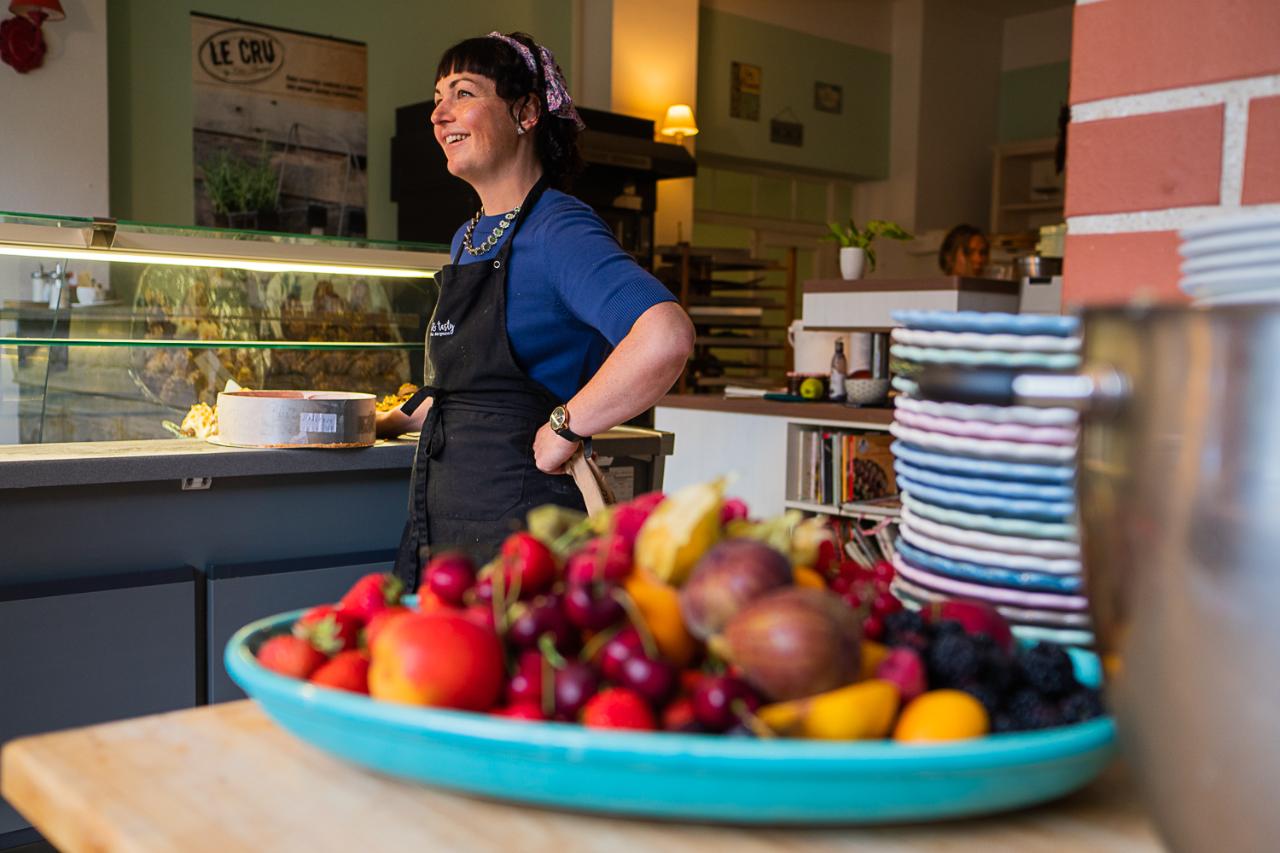 Doreen Bergmann actually trained as a lawyer, but decided that she’d much rather open a café in her home village. ©Mira Held, TTG

No surprise then that we’re hugely looking forward to our second visit. Although we have spent the last year recommending the café to anyone we knew who was heading even vaguely in the direction of Zeulenroda, we hadn’t managed to return ourselves.

It is a perfect day for eating cake. Thick raindrops are pelting down onto our windscreen all the way from Erfurt to Stelzendorf. How lovely then to be welcomed by Doreen with a nice big cup of coffee. We have a brief chat about the last year. About our previous visit, and about hiking in the Himalayas. Then we head outside to collect fresh eggs from the chicken coop. Doreen, undaunted and armed with a broom, is ready to defend us against the rooster should the need arise. The chickens don’t produce quite enough eggs to cover the requirements of the patisserie, but they are grateful recipients of a variety of kitchen scraps. Doreen sources the rest of her eggs and most of her other ingredients from regional suppliers. 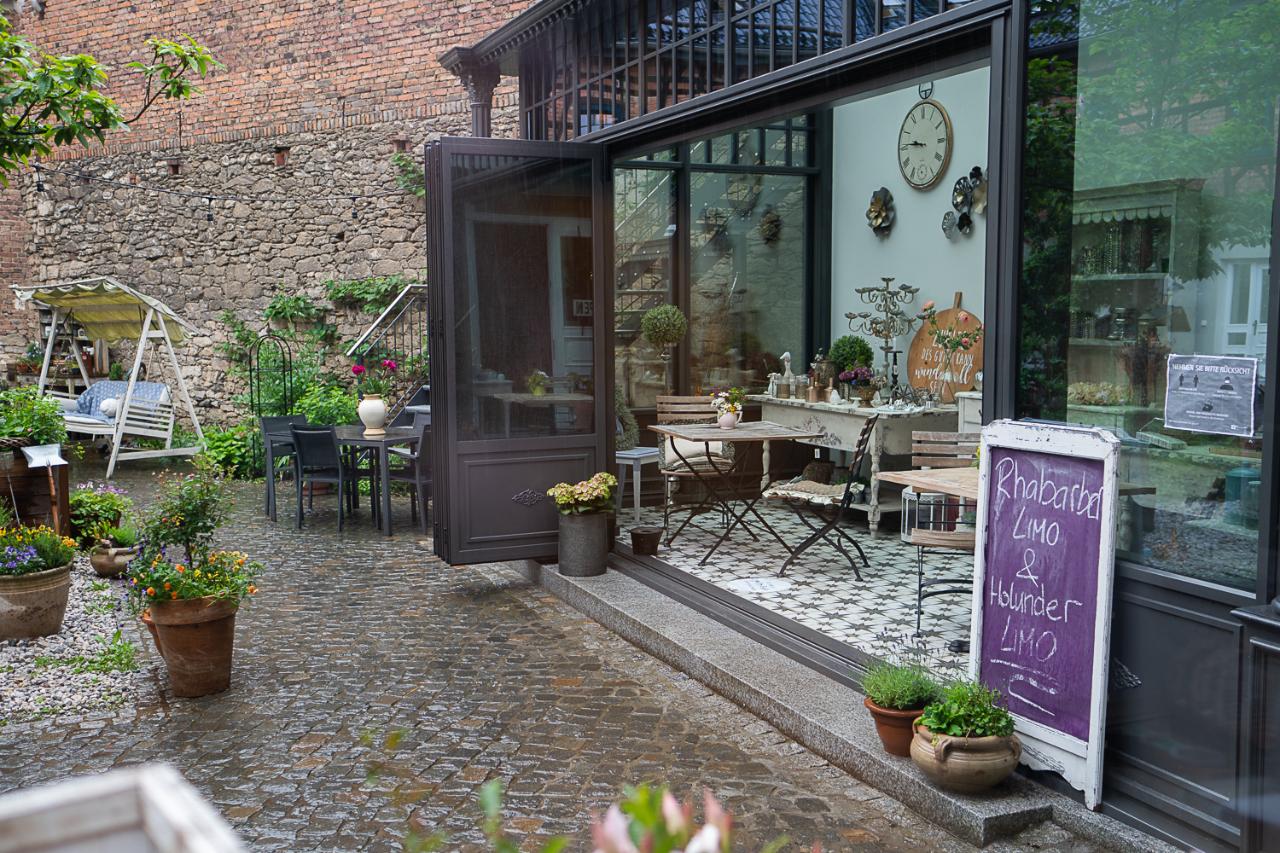 You can sit in the courtyard when it’s sunny, or in the equally delightful interior if it rain. ©Mira Held, TTG

It’s all go in the bakery. Doreen currently employs a staff of two: a friend of her son’s, who had to cancel her planned trip to Australia due to the coronavirus pandemic, and Astera. Doreen tells us she likes to point out to her more narrow-minded customers that it’s Astera, from Syria, who excels at making traditional Thuringian traybakes. I can well imagine that. 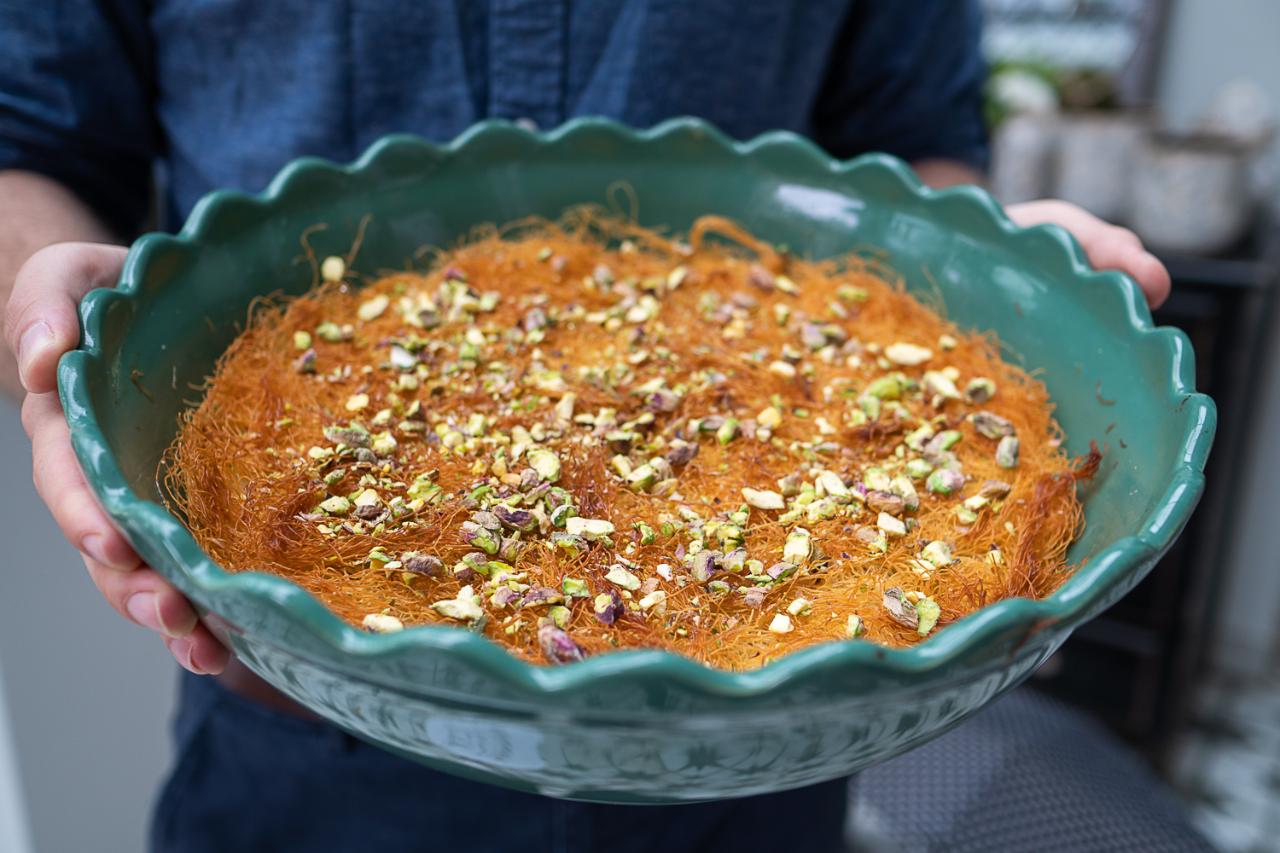 A dessert made with mozzarella may sound strange, but kanafeh strikes a perfect balance between sweet and savoury. ©Mira Held, TTG

Flo’s eyes light up as he takes a look inside the large oven. It contains two big baking dishes filled with kanafeh, an Arab dessert made with mozzarella, pistachios and kadayif (angel’s hair) that we simply couldn’t get enough of last time. It says a lot that Doreen and Astera remembered this and are baking this delicacy especially for us. But that’s what Pâtisserie Bergmann is like – everything is done with lots of love. We are delighted. 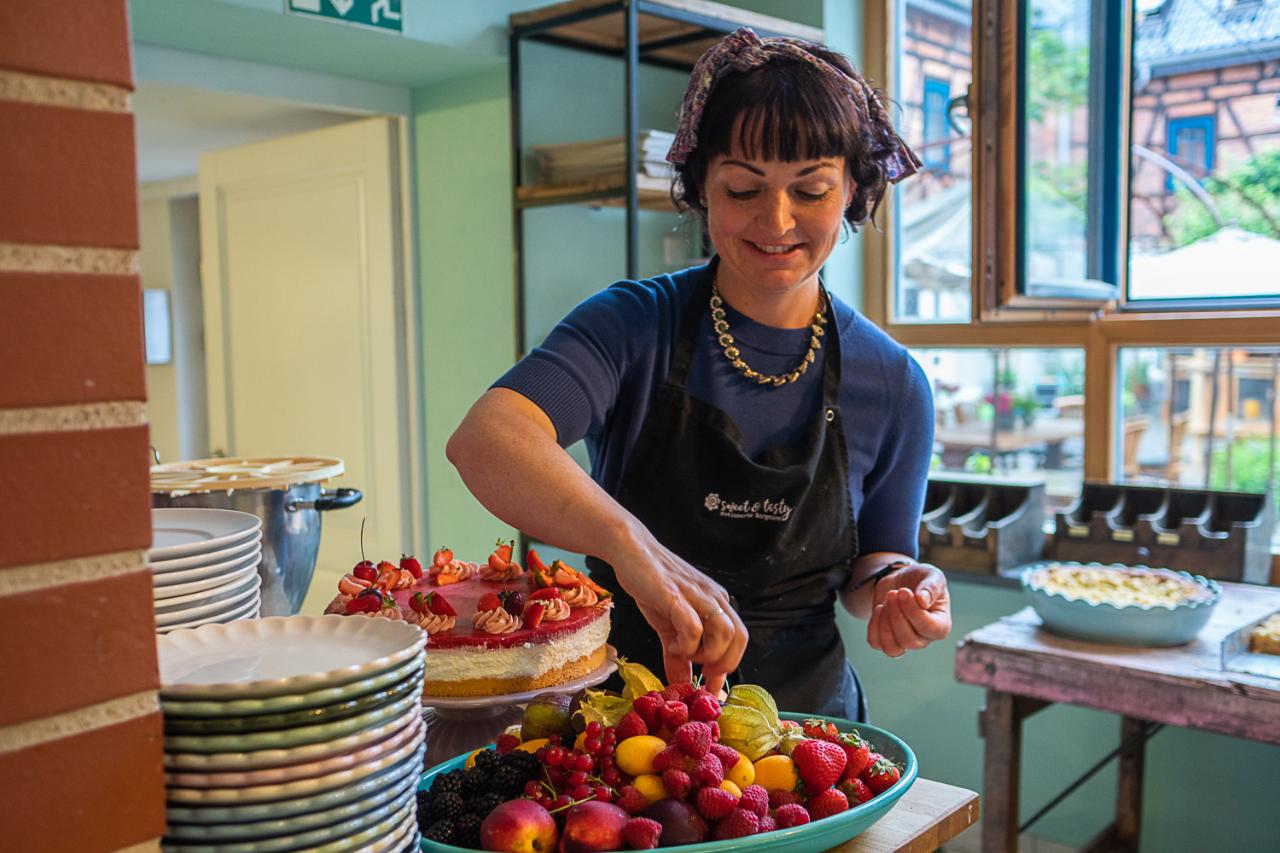 Doreen admits that her extravagant decorations may not always be economical, but they are stunning. ©Mira Held, TTG

Next we get to witness how Doreen turns delicious-looking cakes into works of art. This requires freshly picked flowers from the garden and a large bowl of fruit. First to be decorated is a strawberry and yogurt gateau. To start with, the red icing is adorned with swirls of pink buttercream. “Buttercream can be pretty awful, but I always add some fruit, that makes it tastier and much lighter,” Doreen explains. To prove her point she hands us a little taster and, would you believe it, buttercream with strawberries really is twice as light as the traditional variant.

Now the little pink swirls are covered in strawberries, blackberries and cherries, and then roses and yarrow add the finishing touches. It looks simply amazing. I’m fascinated by how casually Doreen distributes the decorations across the cakes. Now and again something slips, a few currants roll across the top of the cake or the strawberries aren’t quite the same size. I would be panicking, and painstakingly trying to correct every ‘error’. But Doreen simply leaves things as they are. 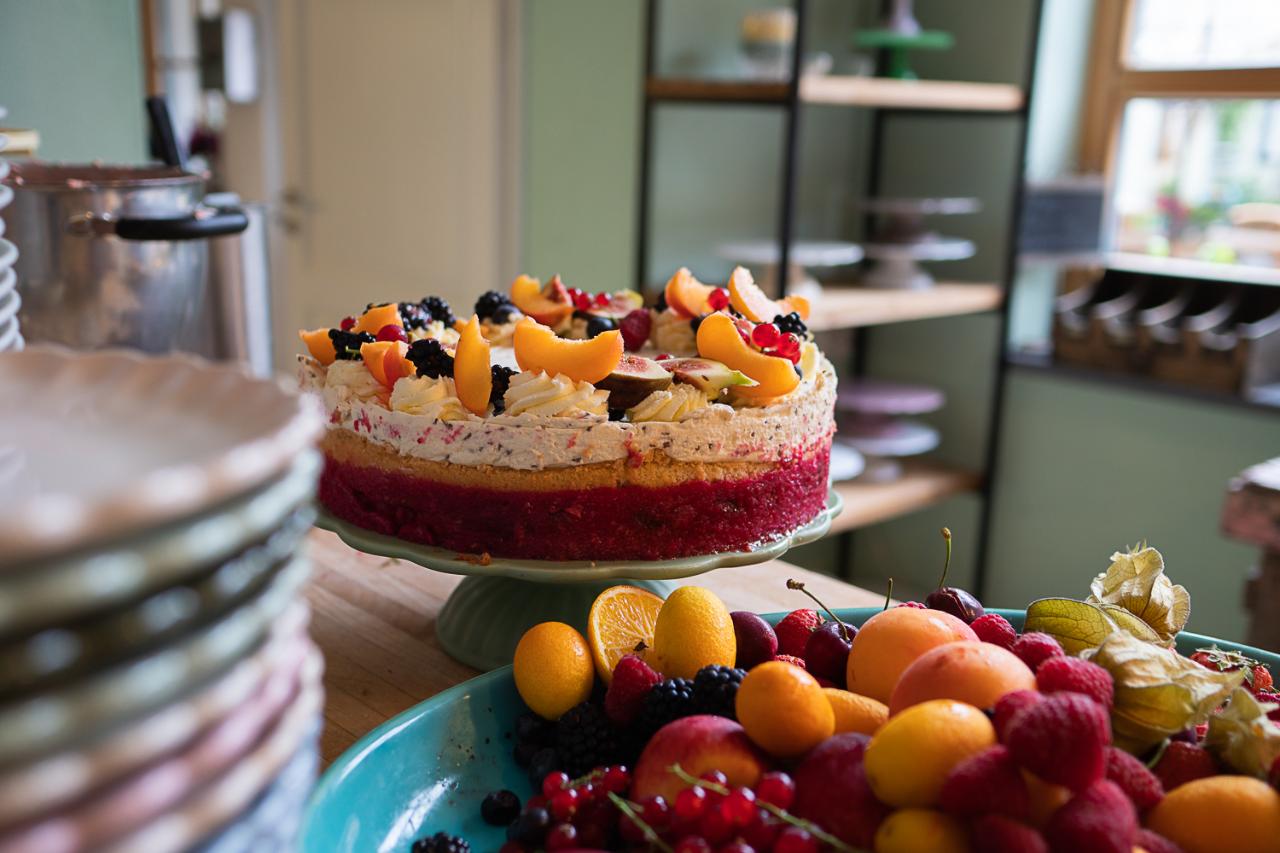 There are dozens of baking books around the patisserie, but many of the recipes are Doreen’s own inventions. ©Mira Held, TTG

I wonder if that may be one of the secrets of the patisserie, that it achieves perfection unintentionally, simply by letting everyone be who they are. And through Doreen’s ability to handle any situation flexibly because of her relaxed attitude. This philosophy shines through in all the stories of minor catastrophes and spontaneous ideas, and also in the genuine concern for the customers. Nothing is meticulously planned or calculated here, instead there is plenty of attention to detail and real passion. Risks are gladly taken and richly rewarded. Doreen boldly throws herself into adventure and overcomes obstacles with a compelling openness. I find that very inspirational.

I’ve even found a cake to match my outfit. ©Mira Held, TTG

After this minor revelation, I join Flo at one of the tables in the café. Meanwhile Doreen has lit the fire. It may be June, but it’s a little chilly in the former barn today. I can easily imagine how cosy the patisserie must be on a frosty autumn day.

There are bunches of flowers on the tables, awaiting the afternoon’s customers. The café isn’t just frequented by tourists, but also many locals from surrounding villages. And the workmen from the building site that is currently in the village come in for lunch, and then return later with their mothers for coffee and cake. 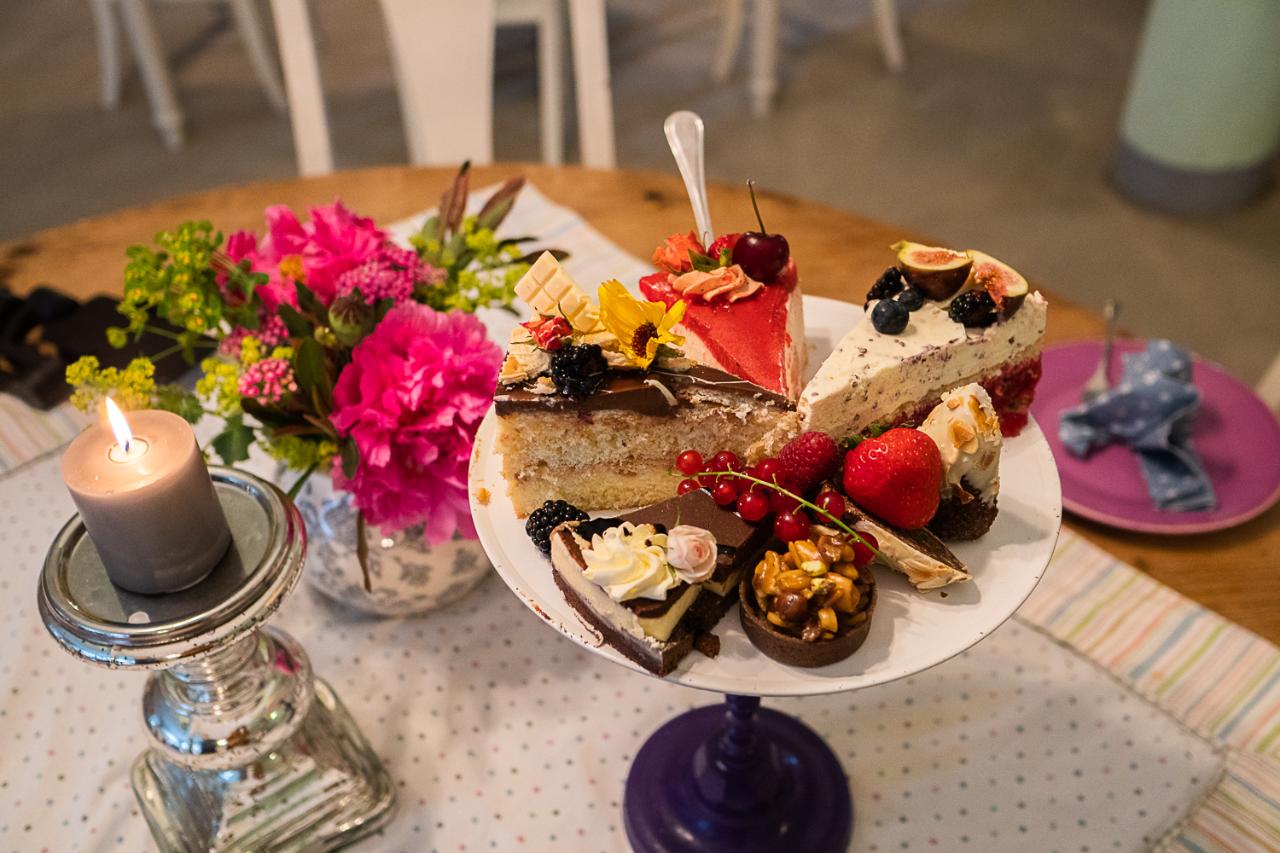 I can’t imagine how anyone could resist this display. ©Mira Held, TTG

I feel like a kid in a candy store as I gaze at the stand with its six different delicacies. Strawberry and yogurt gateau, red berry compote stracciatella cake, granatsplitter (shortcrust pastry with a buttercream filling and chocolate coating), a small nut and salted caramel tart, a tangy balsamic vinegar tart and a classic from the former GDR, the LPG cake (with biscuits, buttercream and brandy).

What can I say? Although I’m more than full after only half a portion I have the same problem with the kanafeh as last year. How can I possibly stop eating it when it’s so incredibly delicious? And it’s not just the kanafeh. The strawberry and yogurt gateau is more like a layer cake, as it doesn’t have much of a base. The red berry compote stracciatella cake wobbles enticingly, while the balsamic vinegar tart with dark chocolate is an exciting taste experiment. The tarts and gateaux are not just beautiful, they’re also scrumptious. 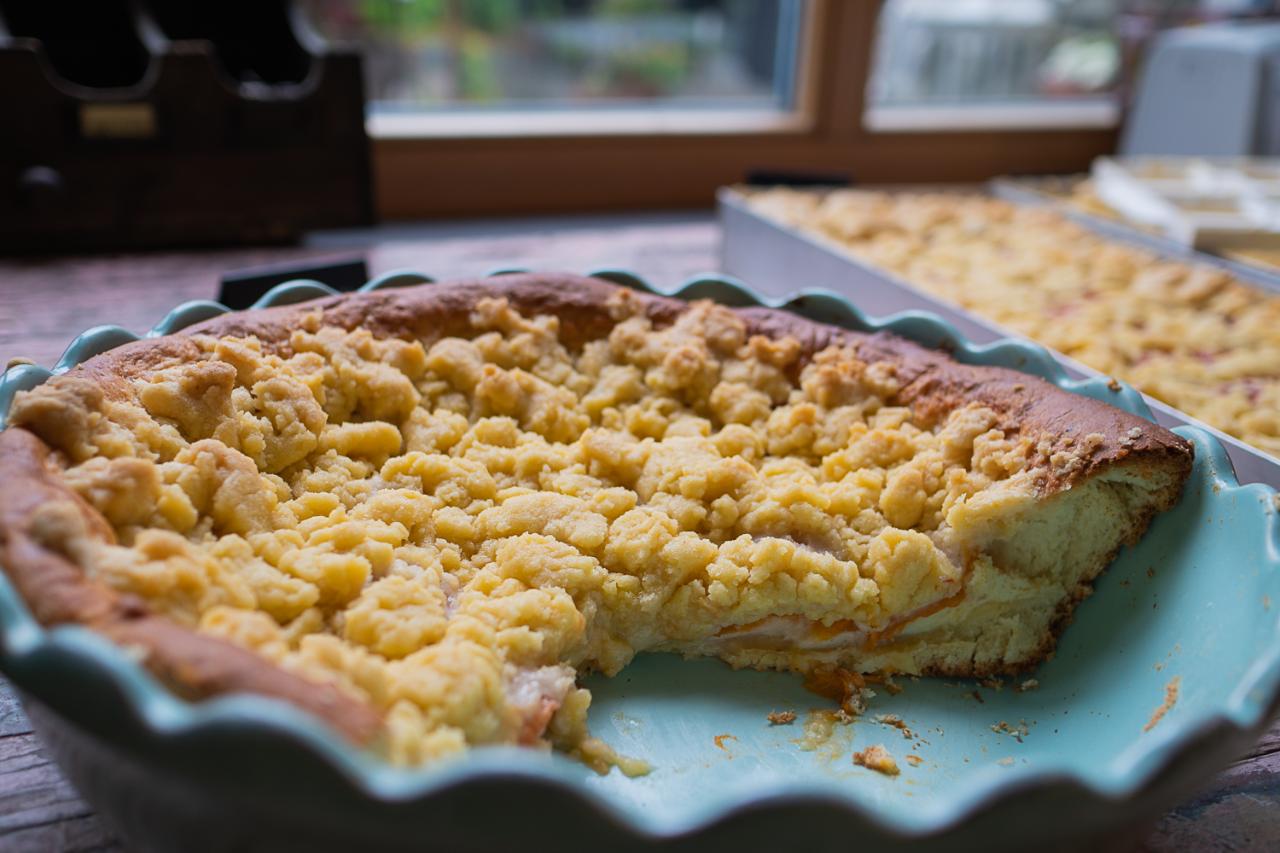 It will come as no surprise that on my sofa later that evening I’m once again snacking on kanafeh. We’d taken the rest of the dish that was meant for us home. Doreen explained that Astera always pays close attention to what and how much her guests are eating, as is the custom in Syria. This tells her what she as host should be preparing next time round. I would really like to eat kanafeh at Pâtisserie Bergmann more often, and I’m happy to do whatever is necessary to demonstrate my enthusiasm!

Pâtisserie Bergmann in Stelzendorf is currently open Wednesdays to Fridays from midday to 4pm. They are also planning to offer their popular breakfast buffet again soon.
let us enchant you 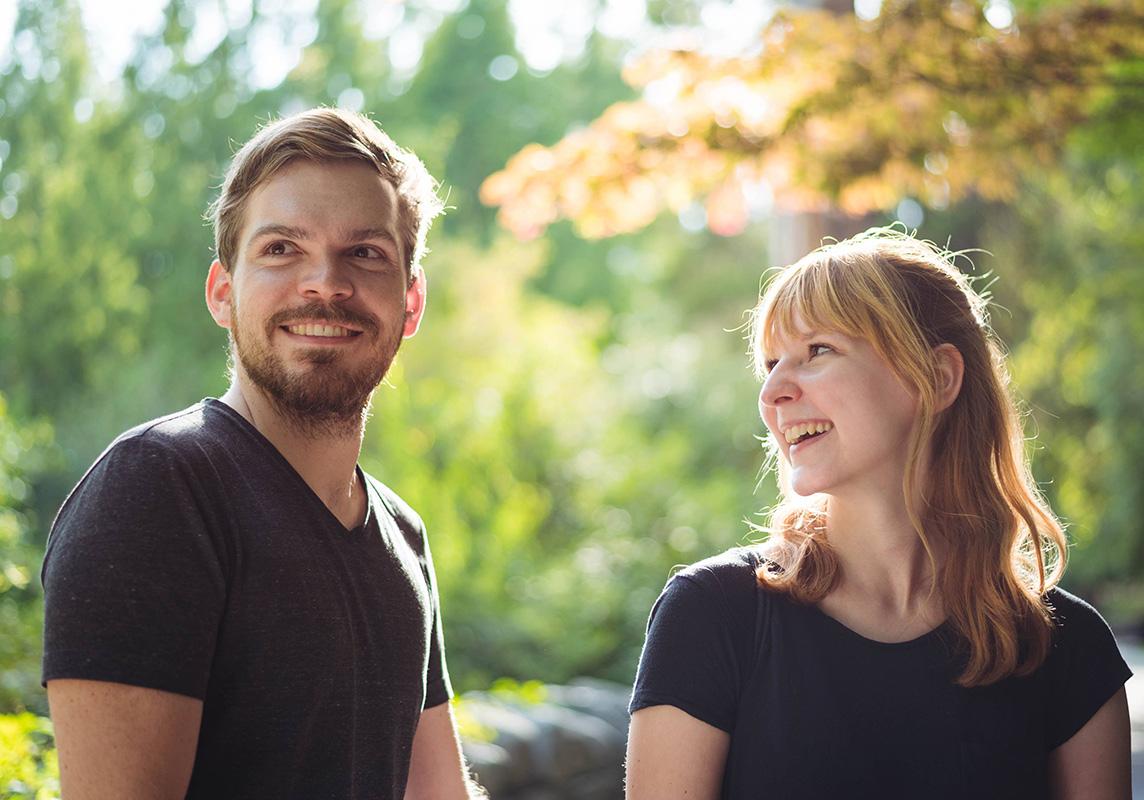 Mira and Flo from the blog "How To Gourmet" are two real Thuringians and gourmets. With them, we discover culinary beacons in Thuringia. Enjoyment stories, wherever you look. They look for new impressions and delicacies at every opportunity, which they present on their blog "How to Gourmet".
Hier gehts zum Blog.